Pesca a mosca Valsesiana is very similar to tenkara. The most obvious difference is the use of three or four flies rather than the single fly used in tenkara fishing, but how the flies are fished is also a bit different. Like tenkara, it was originally developed by anglers using a long bamboo (Arundo cane) pole and a horsehair line. Also like tenkara, no reel is used. The flies are strikingly similar to sakasa kebari tenkara flies.

The fishing method is slightly different, however, and as cane gave way to fiberglass and then graphite, the rods are no longer the same. Although there are anglers in Italy who do use tenkara rods for this technique, those who grew up in the Sesia valley, where the secrets were passed from father to son, use stiffer rods. Fishing in the Sesia valley developed as a means of putting food on the table, not for sport. A stiffer rod allows you to land a large fish more quickly. Like tenkara rods, they are graphite and they are telescopic, but the tip sections aren't quite as soft as on tenkara rods.

Of course, tenkara fishing in Japan was developed as a means of putting food on the table, and the bamboo rods used by the commercial fishermen were almost certainly much stiffer than modern tenkara rods.

It is plain to me that the rods, not only traditionally but also of today, must be significantly stiffer than tenkara rods just by the descriptions of the lines that are used. The lines were horsehair, and traditionalists use horsehair even today. The descriptions I've seen from various sources all suggest that the lines where tapered from three or four hairs at the tippet end up to perhaps 14 or 16 hairs at the butt end of the line where it attached to the rod.

A line made to those specifications is much too heavy for most tenkara rods, and heavier than necessary for even most keiryu rods. The Nissin Air Stage Fujiryu 6:4 410 would handle it, though.

For my first attempt at pesca a mosca Valsesiana, I tied a line heavier than I would normally use, tapering from three hairs up to 9, and matched it with a long, slightly stiffer rod. It was actually a fairly nice combination. 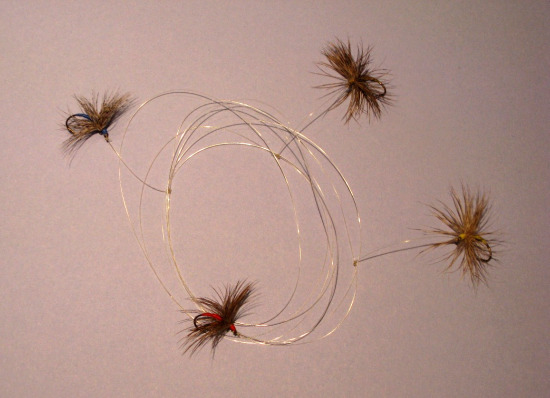 A cast of four flies for pesca mosca Valsesiana.

Instead of the single wet fly used by tenkara anglers in Japan, the anglers in Valsesia use a cast of three or four wet flies - generally four on larger streams and three on small streams. The flies themselves have a reversed hackle and look quite similar to the sakasa kebari tenkara flies. Also, like tenkara flies, they are not intended to be exact imitations of specific insects. Tied with a soft hackle (partridge or woodcock for the flies in the photo) and a floss body of blue, yellow, red, green or brown, they look almost like a cross between a sakasa kebari tenkara fly and a North Country fly as described by Pritt in 1886. They do not appear to be nearly as sparse as the traditional North Country flies, however.

A generation of American fly fishermen (depending on your age, either your father's or grandfather's generation) routinely fished a cast of three wet flies. The rods were bamboo, the lines were silk, the fishing was generally across and down, and it was very effective. It's almost a lost art, just as Andrea tells me that true pesca a mosca Valsesiana is almost a lost art, even in his valley where it originated.

Throughout the rest of Europe, where people fished with long rods and horsehair lines from the time of the Roman legions until the time of reels and woven silk lines, fishing with the long rods actually is a lost art.

The use of four flies is not to try to catch more than one fish at a time, although that does happen occasionally. Using four flies spaced at roughly 12" (30 cm) intervals allows you to present flies at different distances and also different depths on a single cast. You can cover the water more efficiently. The top fly is held so that it almost dances on the water's surface (essentially the same as the old American or British technique called "dibbling the top dropper").

How the flies are fished.

Unable to wait for my next time trout fishing, I went to a nearby pond with my four-fly casts. (New York generously allows me to fish up to five flies at a time, but check your local regulations). First, you do need a slightly longer and slightly stiffer rod to fish this style.

Bluegills absolutely love the Valsesiana, or in my case, the Sakasa Kebari flies. As one of the photos on the Sakasa Kebari page shows, you have to be fast or the bluegills will take more than one of your flies before you realize you have a fish on!

I did get some horrendous tangles, so casting definitely takes practice, but the four flies together were much more effective than a single fly or even a pair of flies. I couldn't wait to try pesca mosca Valsesiana on a trout stream!

The second attempt was pretty much a replay of the first. Warm water fishing although this time from a boat rather than a canoe. I caught a lot of bluegills (including another one that had two of my flies in it's mouth). Also caught a smallmouth, a largemouth and a crappie. Not a bad day, all in all.

The third attempt was on a trout stream, this time with a longer, heavier horsehair line tied as they are in Valsesia. The good news is that in the first 50 yards after wetting a line, I had missed two strikes, one from a nice fish that came all the way out of the water trying to get my bouncing top dropper; and I hooked a really very nice fish that finally came undone as I was just starting to think "now how am I going to net this guy?"

The bad news is that for both the showy missed strike and the fish that was lost, my line flew up into the treetops and I ended up losing all four flies - both times! In the first 50 yards of stream I had already lost all my flies that hadn't gotten chewed to tatters from the previous day's bluegills. I've never lost so many flies in one day in my life. So stock up on flies if you're going to try pesca a mosca Valsesiana on tree-lined eastern streams!

There are a number of videos on YouTube showing pesca a mosca Valsesiana. In several of them you can see anglers with leader wallets that have multiple 4-fly casts already tied and ready to go. That is something I would highly recommend if you wish to try this fishing style.

Small stream pesca a mosca Valsesiana uses a cast of three flies. I have tried that with a 12' rod and the size 4 Sunline Hi-Vis Fluorocarbon line. It actually worked very nicely, and I had the best day on that particular stream that I've ever had. Give pesca mosca Valsesiana a try. It is a fun and very effective way to fish.

If you want to learn more, the best source I know is https://www.moscavalsesiana.it/en. Andrea Scalvini, who runs the site, grew up in the Sesia river valley and learned pesca a mosca Valsesiana from his father, who had learned it from his father. It doesn't get any more authentic than that.