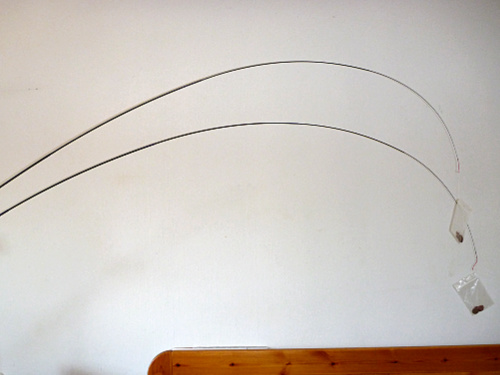 Most keiryu rods (top) have firmer midsections and softer tips
than most tenkara rods.

That softer tip is useful when fishing with flies as well as bait. Although a trout knows very quickly that an artificial fly isn't real, I am convinced that tension on the line is a more immediate trigger to spit out the fly than is the hard pointy hook. I have noticed it in my own fishing and had a very instructive email conversation with a customer who fished extensively over a period of several weeks with a number of different rods.

His fishing style was the same with each rod - tight line nymphing with yarn markers to indicate strikes. What he discovered, and then through repeated testing, confirmed, was that with his stiffer rods he felt more takes, but he caught far fewer fish. By the time he could react the fish had already spit out his fly. With his softest rods, he felt fewer takes, but he saw the markers hesitate or dip and was able to set the hook before the fish spit out his fly. He determined that his hook-up ratio was 3:1 in favor of softer rods.

The relatively soft rod tips (and by tip I mean the top few sections of the rod, not just the tip section itself) also allow most keiryu rods to cast a tenkara line. I am sure that most of the keiryu rods sold on TenkaraBum.com are actually used for tenkara fishing rather than keiryu fishing. Deep down, though, they're bait rods.

Keiryu Rods are not all Alike

Lantern fishing, generally done in small headwaters streams, uses a very short line and very stiff rod. When a fish is hooked it is often lifted out of the water and the rod collapsed to bring it in. The line is short enough that the rod must be collapsed to reach the fish, and the rod must be stiff to be able to lift the fish. The Daiwa Keiryu-X rods are examples of rods designed for lantern fishing.

Zero fishing is an ultralight niche within keiryu fishing that uses a very small hook, a very light split shot, and very thin line - all of which are intended to provide as natural a drift as possible. The rods are very soft to protect the very light line, and to bend easily so that when a fish takes the bait it does not feel resistance on the line. The Suntech FMX Keiryu ZPRO are rods well suited for zero fishing. The longer Suntech Kurenai  rods, which are seiryu rods, are also well suited for zero fishing as long as the fish are small. 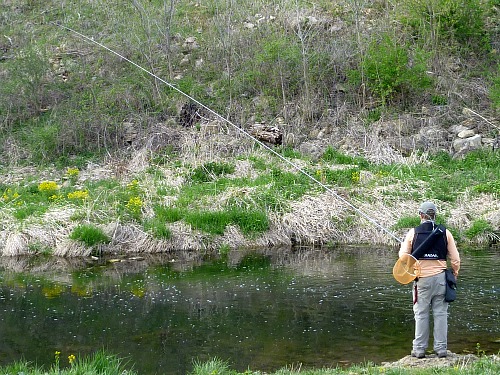 Although short keiryu rods do exist, most keiryu rods are very long (up to 26 feet). Longer rods are necessary for effective keiryu fishing, even on relatively small streams. I think anglers in Japan use the very short keiryu rods only in irrigation ditches, where the water is not clear and where stealth is not required.

When using a keiryu rig (split shot and very light line) you will need to use a long rod or you will end up fishing too close to where you are standing and you will scare all the fish you are trying to catch. If the water is deep, the surface is broken or the water is discolored you can use a shorter rod and fish closer in.

In Japan, other than for extremely small streams, keiryu fishing generally is done with rods of at least 5.3m in length (over 17 feet). Most are over 20 feet. Keiryu rods intended for "honryu" (main streams, what we would call rivers) will be 26-30 feet long. 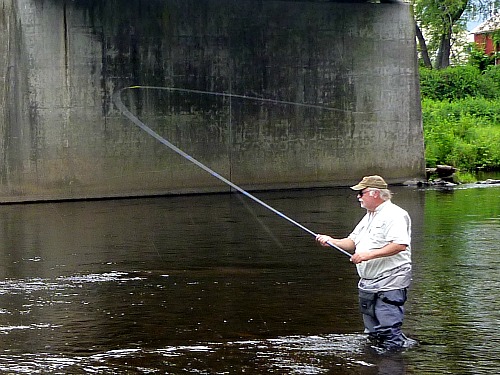 Although some 5.3m keiryu rods are light enough to cast with one hand, it is much more comfortable to cast rods that long or longer with two hands. Your hands should be about shoulder width apart.

I have warned tenkara anglers that they should not hold a tenkara rod with a second hand above the cork (or foam or wooden) grip when fighting a fish. That same warning does not hold true for keiryu rods, which have much larger diameter grip sections that are strong enough to cast and fish with two hands.

The upper hand is mostly just a pivot point. The lower hand provides most of the motion - and it really doesn't take much movement of the lower hand to make the cast. Holding and casting a keiryu rod with two hands produces much less stress on the shoulder and elbow joints than casting a fly rod or tenkara rod with one hand.

An exception to the two-hand casting is if you are fishing a stream small enough that you can reach your target with a pendulum cast. Grip the rod near the butt with one hand, hold the split shot with the other. As you let go of the shot, swing the rod out and up, which will allow the shot and bait (or the bead head nymph) to swing out to your target, at which point you lower the rod tip to allow the bait and shot to fall softly into the water. You really can't do that with very light shot, though.

In addition to casting with two hands, I would urge you to also fish with two hands. Strike detection when keiryu fishing is critical, and it is not unusual for the indication of a strike to be extremely subtle. You cannot hold a 5.3m rod steady enough with one hand to know if the subtle movements of your markers are caused by you or by a fish.

Not all strikes are subtle, which may lull you into thinking you can tell the difference, but I assure you, if you try to fish a 5.3m rod with one hand you will miss strikes if fishing with flies or get deep hooked fish if fishing with bait. 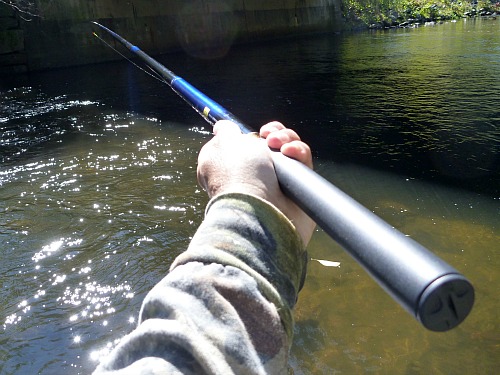 Too much rod for one hand.

For years now, I have described many keiryu rods as being suitable (or even ideal) for big water, big fish tenkara. While I still believe that is true to some extent, fishing traditional tenkara with a rod over 5m long presents problems.

A key feature of tenkara as practiced in Japan is manipulating an unweighted fly through gentle, rhythmic pulses that give the fly the appearance of life and entice a fish to strike. The same gentle pulses that work very nicely with a 3.6m rod and line result in wild gyrations when done with a 6.3m rod and line.

You can certainly cast a light 6.3m line, hold most of it off the surface and fish an unweighted fly with a dead drift if fishing upstream or skate it on the surface if fishing downstream, but the rod and line are just too long to give you the extraordinary fly control that is possible with a 3.6 or 4 meter tenkara rod.

For dead drift fishing bead head nymphs, though, where you are controlling the drift of the fly but not imparting any action to the fly, I would argue that a 6.3m keiryu rod is much better than a 3.6m tenkara rod. But then, I would argue that the fishing style is a lot closer to keiryu than to tenkara.

Even though most of the trout Japanese keiryu anglers catch are relatively small - generally shorter than 12", nearly all of the rods are capable of landing much larger fish. Keiryu anglers fish with very light lines, rarely more than 4# test, because the lighter the line the more natural the drift. The rods are supple enough that they protect light tippets very well.

The resistance a fish feels when it pulls against the rod is progressive, the harder it pulls, the more resistance it feels. That is completely different than a fish pulling against the drag of a reel, where the resistance is constant. Also, the extremely long rod, held to the side rather than straight up, is effective in guiding or turning a fish. You may not be able to stop a run, but if you get the rod to the side immediately, you can often make the fish swim in a semicircle rather than a straight line. You will surprised at how quickly even a fairly large fish tires when pulling against progressive resistance. 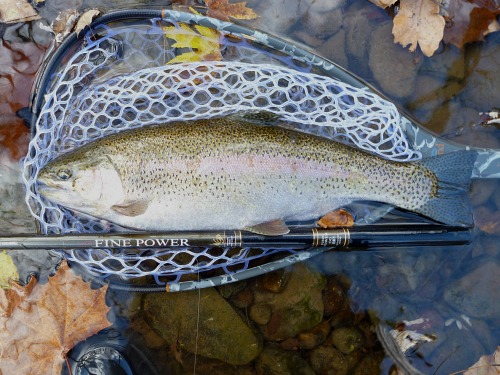 Not Just for Trout

All in all, the rods are really quite versatile!

Please click on the links or the photos to go to pages with detailed write-ups and Add to Cart buttons for the rods.

Nothing in stock at the moment.