The development that again makes the upstream worm as effective as it once was is the availability of tenkara and keiryu rods. Tenkara rods, designed for fishing artificial flies without added weight, and keiryu rods, designed for fishing live bait with split shot, both provide what is needed to fish the upstream worm effectively: a long, pliant rod.

The old masters recommended fishing the upstream worm with rods ranging from 12 to 17 feet long - with several recommending the same 12 foot rod the angler used for fly fishing (remember this was 80 to 150 years ago). For the last 50 years, at least, a 9 foot fly rod was the longest that was readily available. Only within the last few years have 10 and 11 foot "Euro-nymphing" rods been available. Only in the past ten years have 12 to 14 foot tenkara rods been available outside of Japan.

Finally, we again have rods that are suitable for fishing the upstream worm.

Keiryu fishing is done primarily across and down rather than upstream. The keiryu line is extremely light. A split shot is added to provide the weight to make the cast and to get the bait down near the bottom.

Upstream Worm fishing is by definition done upstream, with no added weight if the water is not too deep and the current not too fast. The line itself provides the weight necessary to make the cast. Initially the line would have been horsehair.

When I first tried what I called Ultralight Worm Fishing, I was sure tenkara line would allow me to cast a worm. After all, it casts flies without any added weight so it would surely cast a worm without added weight. My biggest concern was whether the casting action would tear the worm off the hook. 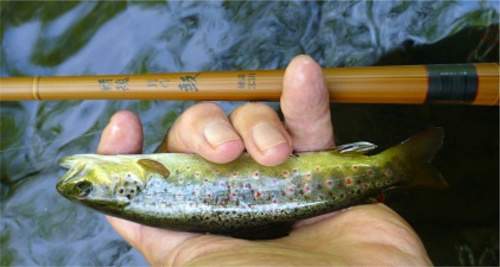 I started with my softest seiryu rod. The rod is so soft and the casting motion so slow and gradual that it did not tear the worm off the hook. The weight of the line, plus the weight of the worm itself made casts easy and accurate.

My next question was whether the technique was limited to the softest of rods. Would it be possible to use a firmer rod and still not tear the worm off the hook when starting my forward cast?

I switched to a 12 foot keiryu rod which was much closer to the stiffness of many tenkara rods.  By slowing my cast just a bit, concentrating on starting the forward cast slowly and accelerating smoothly, I still got great casts and did not rip the worm off the hook.

Where the stream opened up a bit I switched to a Suntech GM Suikei Keiryu Special 44 (which has been replaced by the TenkaraBum Traveler 44). The result was the same. Concentrating on making a smooth, jerk-free cast allowed me to cast a worm and not have it come off the hook.

On a subsequent trip I tried the same technique with four two-handed keiryu rods, ranging from 5.3 to 6.6 meters in length. All of them were able to cast a worm using size 2.5 fluorocarbon tenkara line. Each of them, even the very soft Suntech FMX Keiryu ZPRO 53 was quite effective in setting the hook, although as I will cover later in the section on hooks and hooking, setting the hook in this technique, with this gear, is really just a tightening of the line not a jerk.

Several of the early writers on the upstream worm recommend relatively stiff rods, or at least rods with relatively stiff tips in order to get good hook sets. I am pretty sure they wanted a stiff rod tip because they were using much larger hooks with much larger barbs. If you use a small hook with a micro barb, very little force is required for a hook set. Given also that this technique is one that utilizes no, or at most, minimal weight, the worm will not be very deep so you will not have to pull a lot of line through the water. You will not need a stiff rod.

The shortest rod I have used for the upstream worm was 3.3 meters, a bit over 10 feet. The longest was twice that at 6.6 meters. A rod shorter than 3.3m will force you to fish close enough to where you are standing that you will run a definite risk of spooking all the trout you are trying to catch. For all but the smallest streams, I would suggest a rod of about 12 feet (3.6m) at minimum. Personally, I find 7m rods to be cumbersome, and would not choose a rod longer than the 21'7" Suntech Fine Power 66. Although it is much longer than the longest rod recommended by the old masters, it weighs about half of what their rods weighed.

For upstream worm rods, I would suggest concentrating on 3.6 to 4m tenkara rods or 4.4-5.4m keiryu rods.