Keiryu Tactical Nymphing, or perhaps more more appropriately, “Tactical Nymphing with a Keiryu Rod and Line” offers some decided advantages over using either a tenkara rod or a fly rod.

Tactical Nymphing, as explained by Rob Worthing of the Tenkara Guides, LLC, has general principles rather than strict rules. Two of those principles are light weight and low profile. Using relatively small, lightly weighted nymphs and a thin (low profile) line is somewhat similar to the “zero” niche within Japanese keiryu fishing, which uses a small bait on a light wire hook, a small split shot and thin line. In both cases, the goal of the light weight and the thin line is to achieve the most natural drift possible.

The most obvious advantages that a keiryu rod provides are the greater length and the ability to fish with an extremely thin line. Although described more fully on the keiryu lines page https://www.tenkarabum.com/keiryu-lines.html a keiryu line is very light, consisting primarily of tippet material, often no thicker than 5X. With a line that light, you will not get any appreciable line sag. Keiryu Tactical Nymphing will thus allow you to fish with a much tighter line and have much more direct contact with your flies (another principle of Tactical Nymphing).

When keiryu fishing with bait and a single, BB size split shot, I generally rig a line, rod tip to hook, several feet shorter than the rod. For Keiryu Tactical Nymphing with two or three lightly weighted nymphs I would rig the total line length about three or four feet longer than the rod. Compared to a BB shot, two or three lightly weighted nymphs will have a bit less tendency to try to hang straight down from the rod tip, and much less tendency to fall directly to the bottom and get wedged between rocks, allowing you to fish with a slightly longer line.

The nymphs themselves should be on lighter tippet than the main portion of your line. They will get snagged on the bottom occasionally, and while losing a nymph or two is bad enough, you definitely don’t want to lose your entire line. The keiryu yarn markers (described below) should be on the main portion of the line, so even if you do get snagged and lose flies, you will not lose your markers.

The line itself has essentially no weight, so you couldn’t cast it if you didn’t add some weight. Keiryu fishing in Japan uses a lead split shot. Tactical nymphing utilizes tungsten bead heads, whose primary purpose is to get the nymphs down near the bottom early in the drift. However, they also provide enough weight to allow a soft keiryu rod to cast the ultra thin line. 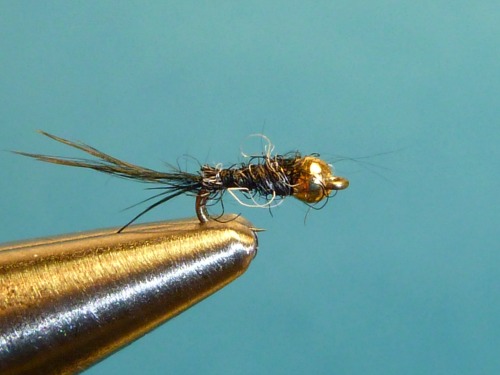 A yarn body provides a little additional weight for casting (wool yarn absorbs water) but does not add weight when the nymphs are under water (the water in the yarn weighs no more than the water surrounding it and the yarn itself has little weight).

A line made from 5X tippet is essentially invisible. If you can’t see the line, you can't watch it to detect strikes. Although the light line will be tight enough for you to feel many strikes, if you fish only by feel you will miss lots of fish.

Competition anglers use a “sighter,” which is a length of brightly colored line incorporated into their leader. They use a sighter because competition rules do not permit anything to be tied onto the line. Some tenkara anglers use sighters although most just watch their hi-vis tenkara line, which effectively is a twelve foot long sighter. Rob Worthing uses a sighter (often white) with a lo-vis fluorocarbon line to maximize stealth.

The line keiryu anglers use is so thin, though, that even if it was made from a hi-vis material it would still be very hard to see. Keiryu anglers use yarn “markers,” which are knots of thin, brightly colored polypropylene yarn tied around the line. The knots are tied so that they can be moved up or down the line but will then stay put. They should be positioned several inches apart (further apart than shown in the photo to the left), with the lowest marker a bit above the water’s surface.

Heavier flies will overcome the wind resistance, but heavier flies will have a much less natural drift. Keiryu line construction is a delicate balance, and achieving the right mix of fly weight and marker knot tag end length is not always easy - at least initially. If you generally use flies of the same weight, you can determine what tag end length provides the optimum balance of good visibility and ease of casting.

Although they sound a bit tricky, keiryu marker knots provide a few tremendous advantages. Most notably, they are easy to adjust. If you come to a deeper spot in the stream you can just slide the markers up the line. Thus, you can fish at the right depth all the time without having to add or remove tippet. A friend who fished with a well known nymph-fishing author and guide reported that they spent a large amount of time re-rigging to change the length of their tippet. Getting the nymphs at the right depth yielded a lot of fish, but yarn markers would have made the adjustments quicker and much easier. 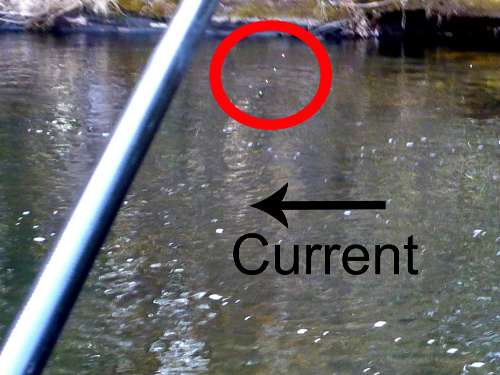 If you slow the drift, your markers will angle as shown.

Of course, you can adjust Nakazima Ball Floats or Owner Acorn floats easily too, but the yarn markers are substantially more sensitive. Plus, floats and floating strike indicators will float along at the speed of the current at the surface, which is faster than the current near the stream bottom. A float will pull your nymphs along faster than naturals would drift. If you fish with keiryu yarn markers rather than a floating indicator, and if you fish across or across and down, you can slow the drift of your nymphs so they are not being pulled along faster than the current near the bottom.

If you fish upstream, you will not be able to slow the drift. However, another of Rob Worthing's Tactical Nymphing principles is stealth, and yarn markers above the surface are a lot more stealthy than a float on the surface. For that matter, yarn markers are a lot more stealthy than a sighter! I have had fish leap out of the water to try to eat my yarn markers, so they obviously take them to be flying insects, which certainly do not frighten insect-eating fish!

Another very significant advantage of yarn markers over a sighter is that they allow you to use a much lighter line. I have experimented with "hi-vis" 5X, but it is so thin that it is still hard to see. For a sighter to be sufficiently visible, it has to be thicker. Keiryu Tactical Nymphing with yarn markers and a thinner keiryu line will produce much less line sag, which means there will be less line in the water causing drag. When a fish takes one of your nymphs, the lighter line will also have less resistance to being pulled through the water.

If you use four markers and slow the drift, as shown in the photo above, the angled straight line of the markers will slowly turn into a "C" shape if one of your nymphs gets caught on the bottom. If a fish takes one of the nymphs, the reaction of the markers is almost always much more abrupt. With practice, you can usually tell the difference between a rock and a fish, which greatly reduces the number of times you set the hook on a rock or stick. You will lose fewer flies.

Trout are very sensitive to tension on the line. They will even spit out live bait if they feel tension. They will know pretty quickly that your nymph neither feels nor tastes right, but I am convinced that their reaction to tension is much quicker. Most keiryu rods have softer tips than tenkara rods, and much softer tips than fly rods. The softer tips allow fish to take the fly without feeling nearly as much tension on the line.

Because the line is so light, and all the weight is at the end of the line, a standard overhead cast will be jerkier and less accurate than if you had a heavier line and cast the weight of the line. If the nymphs were heavy enough and the line short enough, a pendulum cast would work, but for the nymphs to be heavy enough and for the line to be short enough for a pendulum cast, they would fall outside the light weight and stealth principles of Tactical Nymphing. A hybrid cast, combining a pendulum cast with a bow and arrow cast may work reasonably well. It is harder to describe than to do, but essentially, do a bow and arrow cast, and as soon as you release the line, start bringing the rod tip up so you get a pendulum effect at the same time. Lower the rod tip slightly to lightly drop the nymphs on their target.

The light line and extremely sensitive strike detection are significant advantages. The reduced casting accuracy is a disadvantage if you are fishing pocket water where accuracy is crucial. When fishing featureless riffles, though, it will not be a major drawback. If you already have a keiryu rod give Keiryu Tactical Nymphing a try. Rig a keiryu line with a few yarn marker knots and two or three relatively light bead head nymphs. You might be pleasantly surprised at how well it works.

If you don't yet have a keiryu rod, you can do it with a tenkara rod like the TenkaraBum 40 as well. The photo above shows keiryu marker knots used with a tenkara rod. For that trip, though, I used a much heavier line than a true keiryu line, and a single Killer Bug rather than two or three bead head "tactical" nymphs. Thus it wasn't really a "proof of concept" trip for keiryu tactical nymphing with a tenkara rod. The markers and clear line worked beautifully, though.

I have written a couple of other trip reports that described favorable results using keiryu rods and rigs for fishing heavy nymphs or fairly large bead head black Killer Buggers. I am sure that the same approach would work just as well if instead of a single heavy nymph one used two or three more lightly weighted nymphs - yielding Keiryu Tactical Nymphing.