In the summer of 2014, I held a TenkaraBum Challenge - What can you catch with a Black Killer Bugger? Anglers caught 54 species of fish! This fly works!

I would suggest tying it in a wide range of sizes, at least from size 6 down to a size 20. A large percentage of the species caught were caught with a Black Killer Bugger tied on size 20, 1XL nymph hook with a 2mm gold tungsten bead. I first fished the fly in a size 12, without a bead, and that's what I still use most, but the size 20 bead head is at least as good. 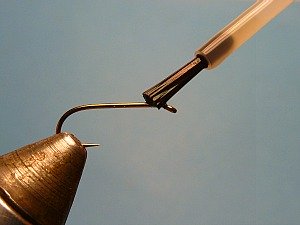 1. Because copper wire tends to slip when wrapped, I start with a touch of super glue on the hook shank. I find a brush applicator works best. 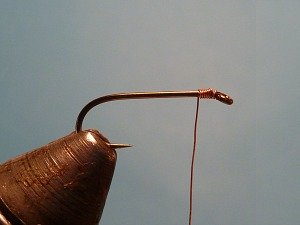 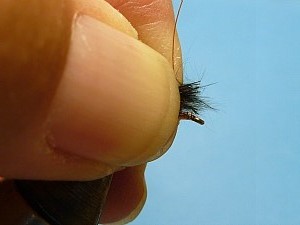 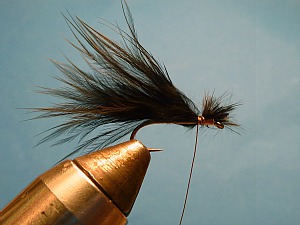 4. Gradually tighten the wire, holding the marabou in place. Make about three wraps of copper wire, after which it should look like the photo above. 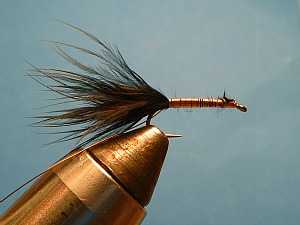 5. Trim the ends of the marabou close, then wrap the copper wire in touching turns to just before the hook bend. Wrap firmly but not firmly enough to break the wire. How do you know? You break the wire a few times. Then you know. 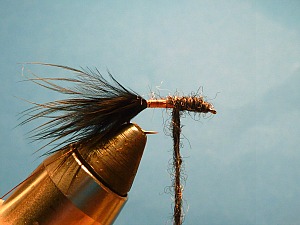 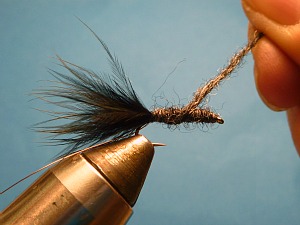 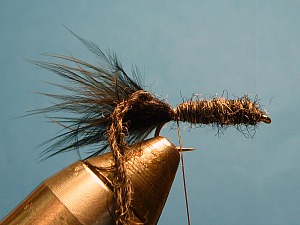 8. When you get to the where you had previously stopped wrapping the wire and the yarn, take one tight wrap of the copper wire around the yarn to hold it in place. Then do a 5 wrap whip finish with the copper wire (touching turns, with each turn in front of the previous one). Pull the wire gently to tighten and then break if off the wire. Cut the extra yarn as close to the wire as you can. I almost never use head cement on the wire whip finish. I always lose the fly before it comes apart. Gently brush the fly with the hook part of some Velcro to pull fibers out away from the body. The loose fibers serve the same purpose as the hackle on a standard Woolly Bugger. 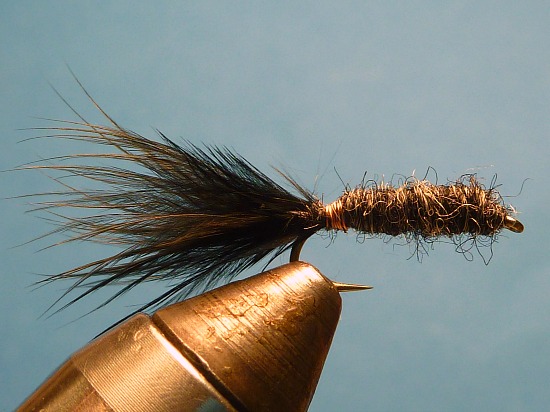 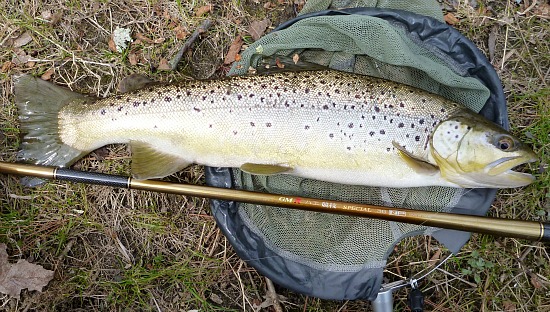 My first trout caught with a black Killer Bugger.

A Killer Bugger is an excellent fly to use when fly fishing for micros. It is easy to tie in sizes 20-26, which will catch all but the smallest micros. The tying sequence is the same as with the larger fly shown above, with just a few modifications.

First, I often use a bead head when tying a micro bugger to make sure it breaks the surface tension.

Second, I highly recommend using very thin thread rather than wire. The bead head provides sufficient weight, and wire is too thick for such a small fly.

Third, I highly recommend splitting the yarn so you tie with only one strand. The Jamieson's Shetland Spindrift I use for Killer Buggers is a two ply yarn. Use just one, and do not use extreme tension when tying or you will pull the yarn apart.

I purchased several colors of yarn from you and the first fly I tied was the black killer bugger. I did not take any pictures because I was to busy catching large bluegill. This fly is incredible. I almost felt guilty it was so easy. Thanks for a great product. Keep up the good work.

Had a fabulous day at a local pond yesterday. A buddy and I caught countless fish and mostly on a smallish Black Bugger.

The rod [Suntech Suikei 39] was best part of a tough two day trip on rain swollen mountain streams. It casts beautifully and handled two 14/16" rainbows in full charge. Had strong heavy currents so not typical trout fishing. Fished traditional kebari with poor results both days but a switch to the Killer Bugger immediately brought the most and biggest fish.

I had a nice day fishing at a local pond. Caught lots of bluegills and a 15 inch large mouth bass using a black killer bugger size 12. Lots of fun! 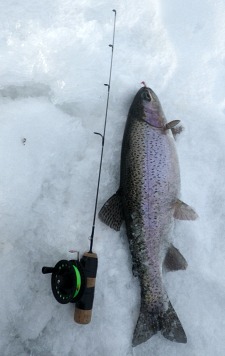