Fishing "The Upstream Worm" is extremely productive but in the US it has been forgotten. At one time, fishing a worm with a fly rod was common. No more. I can recall meeting only one person in the last 50 years who was fishing worms with a fly rod. He was fishing downstream.

In the summer of 2016, I wrote a trip report that I had entitled Ultralight Worm Fishing. Since then, I have received quite a number of comments from people who have tried it and said it was as productive for them as it had been for me. 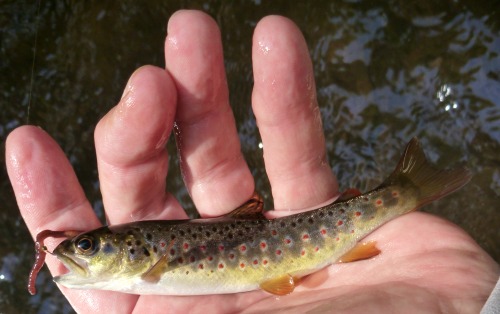 I discovered for myself what had been known to the world for 340 years. In 1676, Charles Cotton wrote the "fly fishing chapters" in the fifth edition of Izaak Walton's The Compleat Angler. Near the very end of the book, there was a single paragraph on fishing a worm upstream with no added weight.

Other "old masters," known primarily for their writings on fly fishing, wrote about fishing worms upstream in low, clear water, uniformly stating that the necessary skills were comparable to those required to fish with flies. At one time the upstream worm, otherwise known as the clear-water worm, was held in high regard.

Sadly, that is no longer the case. Authors of fly fishing books no longer include chapters on worm fishing. One of the best known and best loved recent "fly fishing" books, A River Runs Through It, which is credited with sparking a huge interest in fly fishing - was openly disdainful and condescending towards worm fishing.

In 1916, Bliss Perry wrote "Fly-fishing has had enough sacred poets celebrating it already. Isn't there a good deal to be said, after all, for fishing with a worm?" in his book Fishing with a Worm.

Since then, I daresay several thousands of books have been written about fly fishing. Aside from Bliss Perry's own book,  I know of only two others written specifically about fishing for trout with worms. One was written over 100 years ago and the other over 80 years ago.

There are books on bait fishing, though not many. In 1977, Harold Blaisdell wrote The Art of Fishing with Worms and Other Live Bait. Much of the book was about other fish and other baits, but there was one chapter on fishing the upstream worm for trout, using an ultralight spinning rod. Mr. Blaisdell wrote that following an upstream cast, the angler must reel in line so that the worm drifts at the same speed as the current. In his words "Line control is of the essence. If too much slack accumulates, bites will go unnoticed. Or, if they are detected, the slack will make it impossible to set the hook a the instant the bites occur. If the line is reeled at too fast a pace, this will affect the worm's behavior and thwart the goal of a free and dragless drift."

He writes about the necessity of setting the hook the instant a strike is detected. "A biting trout is usually gone in a flash unless the fisherman sets the hook instantly. It ejects the tiny bait as speedily as trout eject the dry fly to which they have risen." He was not "able to deduce a thoroughly satisfactory explanation" for why trout would spit out a worm, but I think I know the reason.

On the day I discovered (rediscovered) the upstream worm, I started the day fishing with a stiff keiryu rod and a very short line. Fishing directly under the rod tip with a split shot to keep the line tight, there was absolutely no slack as I guided a worm around rocks and down runs. I got lots of hits, but in every case the fish was gone by the time I tried to set the hook. I eventually caught one fish, when in a moment of inattentiveness I let the line go slack. When I noticed the slack and tightened up, there was a fish on the line.

That afternoon, I fished the same stream with the same worms, same hooks, but a different technique. With a soft rod, I cast upstream and kept a bit of sag in the line as a strike detector. I saw the line start to tighten before the fish could feel any tension and I caught lots and lots of fish. Line tension is a killer. I'm sure of it.

The problem with fishing the upstream worm with a spinning rod is that the line is so light (and the rod so short) that there just isn't much sag in the line. Although Mr. Blaisdell recommended using 2 lb fluorescent line, line that thin is very hard to see even if it is hi-vis. And even if you can see the line, the lack of line sag means that the line goes tight and the fish feels the tension almost as soon as it takes the worm. Even with hi-vis line, it's hard to know the fish is there before it knows you're there.

Fishing by feel is not efficient. If you feel the fish, the fish also feels you and it is faster than you are. You will catch some fish when they try to spit out the worm but the hook catches on the way out. You will catch a lot more fish with a rod and line that allow you to see the take and set the hook before the fish feels any tension.

We now have long rods that are modern, high tech equivalents of the rods the old masters used. With them, fishing the upstream worm can again be as effective as it once was.

I think it's time for another look at upstream worm fishing.