Fly rod spoons have been out of favor for decades but perhaps it's time to reconsider. They have (and deserve) a place in your fly box.

Before spinning gear became popular in the US, the only effective way to fish small lures was with a fly rod. The baitcasting reels of the day were not capable of casting light weight lures. Fly rod spoons, spinners and plugs were available and effective. They'd be just as effective today if they were available.

When spinning gear became popular in the 50's and 60's, demand for fly rod lures diminished to the point that they are now essentially gone. If you look hard enough you can find some 1/32 oz spoons - but 1/32 oz is a bit heavy to cast comfortably with a fly rod (let alone a tenkara rod). It works, but it jerks. 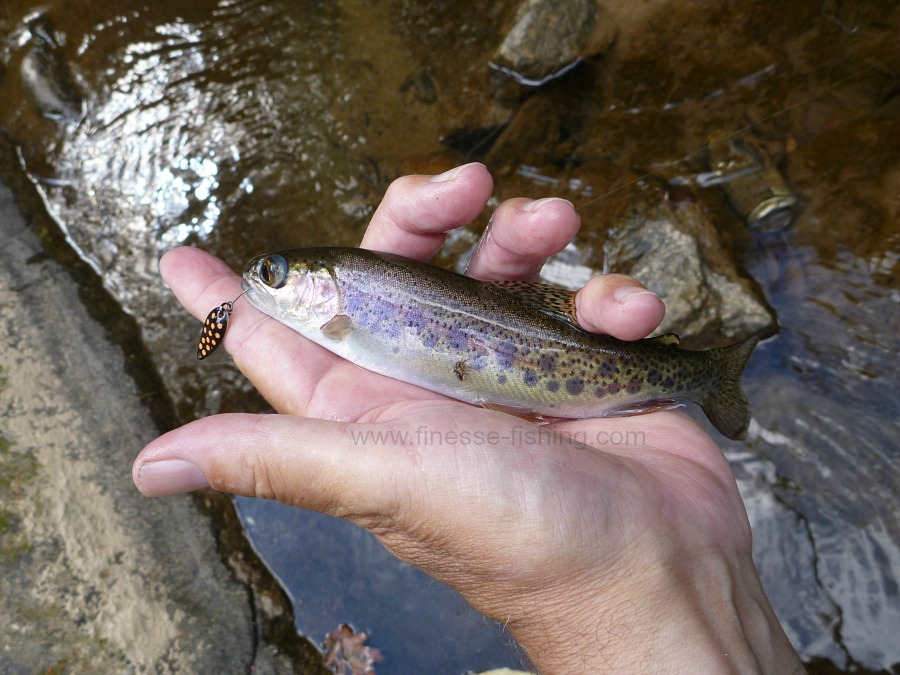 However, much lighter spoons are available in Japan! They are not sold as fly rod spoons, but instead as lures for extra, extra ultralight spinning rods. Extremely light spoons (down to 1/70 oz) and extremely light lines (down to 1.5 lb) are used there to fish in highly pressured, private, stocked, pay-to-fish lakes called "Areas."

The Daiwa Iprimi 56XXUL-S is one of the rods rated for lures down to .4 gram. To see what they could do, when I imported the rods I also got in some micro spoons .4 gram (1/70 oz). Even with the extra, extra ultralight rod and 2 lb line, they proved to be hard to cast very far.

If they're a bit too light for the lightest of the ultralight spinning rods, how about a fly rod? It had been years since I picked up a fly rod, but I have to tell you they cast just fine on a tenkara rod. And truly, if they cast well with a tenkara rod (which they do) they'll cast very well with a fly rod.

The first really light spoons I found were Daiwa Presso Vega spoons. They were extremely popular with TenkaraBum customers, but Daiwa discontinued them and they are no longer available. I no longer have any in stock.

I do still have some .8g Vega spoons. You can cast them with tenkara and keiryu rods, but the spoons are heavy enough that the casting is not as smooth as you might like.

I have imported some .5g Blinde Flanker spoons from Rodio-craft, for which the feedback I have received has been excellent.

One of the nicest things about the spoons (aside from being so light you can easily cast them with a fly rod or tenkara rod) is that they come with a single barbless hook. Releasing fish couldn't be easier.

Because the hook is attached to the spoon with a split ring, which allows it to turn in any direction, the fish can't use leverage to dislodge the hook - which can happen with a streamer. Once the fish is hooked, it stays hooked. You won't lose many - even the wriggly little ones. 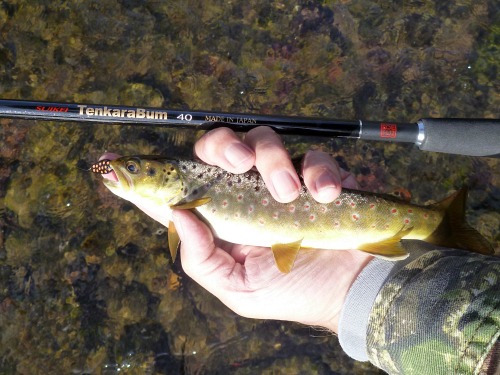 Not too long ago, I read on a spin fishing forum that contrary to popular belief, it is absolutely necessary to set the hook when fishing a spinner. Well, all I can say is that may be necessary when fishing a 1/8 oz spinner with barbed treble hooks, but does not seem to be necessary when fishing one of these little single barbless hook spoons. When fished with a tight line, more often than not the fish hook themselves. The hook is amazingly sharp (which I am confident you will find out for yourself as soon as you pick one up, unless you are extremely careful). It penetrates extremely easily and holds quite well.

Realistically, there is a downside to having a single hook rather than a treble hook. There will be times when a fish hits the spoon but misses the hook. Personally, I believe the advantages of a single barbless hook greatly outweigh that disadvantage. Less damage to the fish and a much quicker, easier release top the list. Besides, I still catch a lot of fish with single hook spoons. 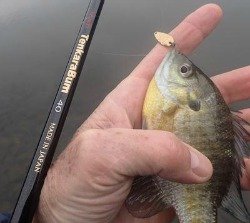 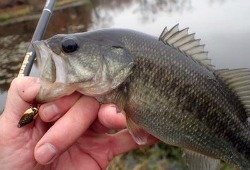 And don't think for a minute that they're only for trout. I saw a thread on a crappie forum lamenting that very small light weight spoons, which used to be available, no longer are.

Well, small fly rod spoons are available again. They are just as effective for bluegills, crappies and even modest bass as they ever were.

Purists may refuse to fish the fly rod spoons because they aren't flies. Many will happily fish streamers - even though other purists believe that streamers aren't really flies either! Personally, I'm not a purist. I fish streamers with no qualms whatsoever.

The fly rod spoons are going to replace the streamers in my box, though. They're just so much more effective. 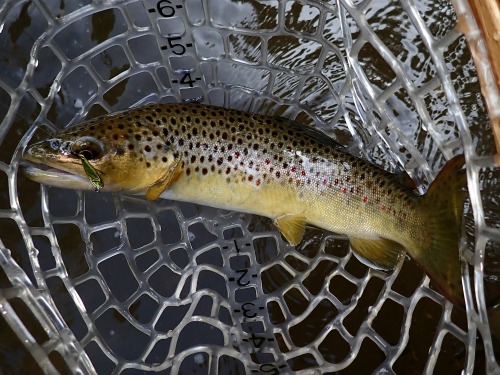 Both represent tiny baitfish but there is something about the flash and the wobbling action of a spoon that a streamer just can't match. I have caught fish on a streamer, but I have never seen three or four fish race each other to get to it - which I have seen with the Daiwa Vega spoons.

I haven't seen a fish miss the streamer and keep coming back and slashing at it until it finally catches it and gets hooked. That is not a rare occurrence when fishing with a small spoon. I have fished a pool with a streamer, without getting a hit, and then put on a small spoon and caught multiple fish from that same pool. Truly, a fly rod spoon is much more effective than a streamer. Plus, depending on how wind resistant the streamer is, the spoon is even easier to cast!

Give them a try. I don't think you'll be disappointed.

And if you have any doubts at all that a large fish would hit such a small spoon, please look at the photo below. It shows a fish caught with a TenkaraBum 36 and a Daiwa Vega .4g spoon. If you look closely, you can see the spoon that hooked the fish. Please keep in mind that the spoon is very nearly an inch long! 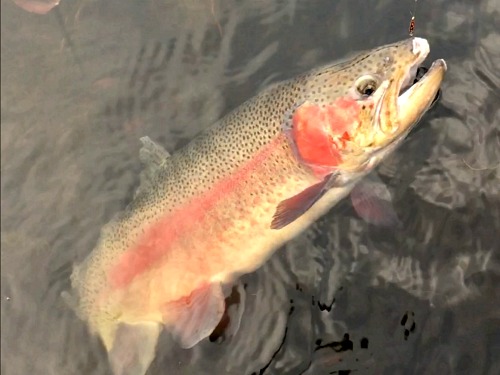 Several months ago an accomplished tenkara angler told me he had never caught a fish with one of the Vega Spoons. I'm sure that's because he doesn't use them, and I'm sure that's because he tried once or twice and then went back to the kebaris or bead head flies he normally fishes. Another angler told me a that he likes them, but he didn't think they got deep enough.

Not long ago, I received a report from Les A, who fishes them a lot and has learned a how to fish them with great results. The following is from Les.

I think the key is to fish upstream, and to fish the spoon slowly enough that it "flutters" and can drift into or beside quiet water, or even settle to the bottom of a pool. If you fish it downstream or across in fast current, the force of the current will not let it drop and will cause it to just spin rather than wobble or, fished even more slowly, flutter.

Just as when fishing a fly, be ready for a hit as soon as the spoon hits the water.

In a follow-up comment, Les said it took him a few times to learn how to use the lightness of the spoons to his advantage. He also said that the Tairiki Snaps allow the spoon to flutter more freely and allow him to change spoons more easily. "I won't fish without one."

Rodio-craft is a small Japanese company that makes spinning rods, spoons and plugs for fishing in Areas. Their .5g Blinde Flanker will be an excellent replacement for the now discontinued Daiwa .4g Vega spoons.

At .5g, they will not be too heavy to fish with most fixed line rods, although I would not fish them with a Kurenai, Fine Mode Nagare or Air Stage Hakubai.

The Blinde Flankers come with a single barbless hook. 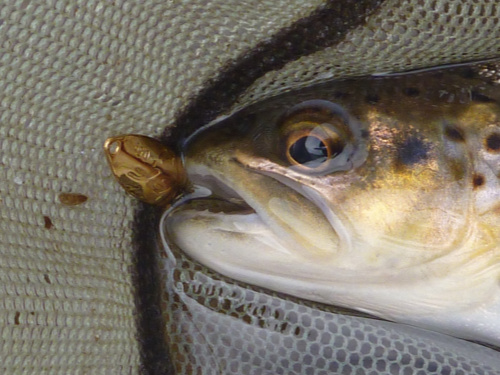 Please note: If you look closely at the eye of the spoons, you will notice that the very front of the spoon ends in a fairly sharp point. If you tie your tippet directly to the spoon, it is very likely to end up on on one side or the other rather than straight off the front of the spoon. That will change the spoon's action, and not for the better.

There are four possible solutions to prevent that problem: a C'ultiva Micro Snap swivel, a C'ultiva Tairiki Snap, a size 00 C'ultiva split ring, or a non-slip loop knot.

I am continually surprised at the number of tenkara anglers who ask me about getting an ultralight spinning rod - or at least dusting off the one they've had for some time but haven't used much lately.

The .5 gram spoons shown above cast well with a tenkara rod or fly rod, but for an ultralight spinning rod I would suggest a heavier spoon (and I would still recommend a spoon rather than a spinner).  For a much larger selection of micro spoons, take a look at the Finesse-Fishing.com site. You will find spoons that will cast quite nicely with ultralight spinning gear. For that matter, the heavier spoons on the Finesse-Fishing site will cast quite nicely with ultralight baitcasting gear.

Although I tied my tippet directly to the Daiwa Vega spoons with the same Double Davy knot I use for flies, a nonslip loop would be better with the Rodio-craft Blinde Flanker spoons.

Cultiva Micro Swivels or Tairiki Snaps are simpler and they allow the spoon to wobble more freely.

If you would rather not use snaps, the Cultiva size 00 split rings will also allow the spoons to wobble freely. 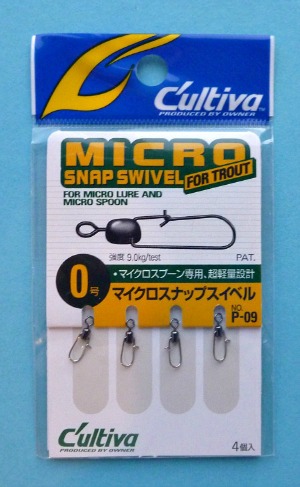 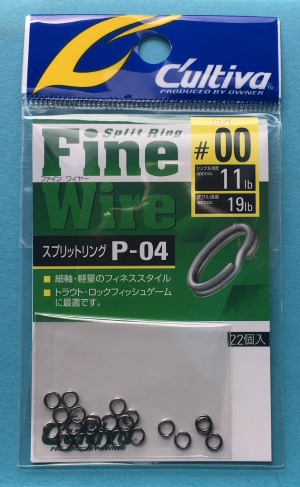 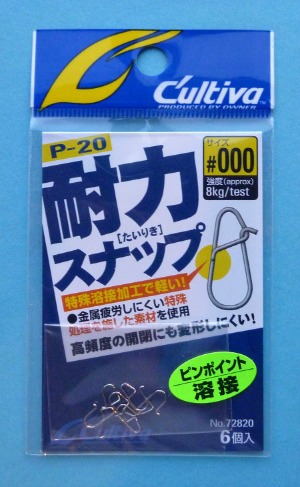 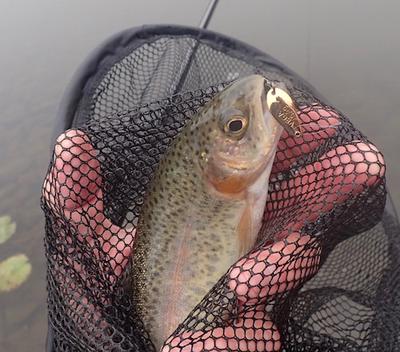