Frank Sawyer's Killer Bug is a great fly. Since I started tying this fly a few years ago it has been my most productive fly by far. What makes it even better is that it is very easy to tie and uses inexpensive materials (at least the way I tie it) just some knitting yarn, some copper wire and a Prismacolor marker.

The grayling killer bug, as I believe it was originally called, was developed in the 1930s by Frank Sawyer, the same man who developed the pheasant tail nymph. At that time, Sawyer worked as a river keeper on the river Avon. As part of his duties, he was to rid the river of grayling. According to his grandson, Nick Sawyer, who runs Sawyer Nymphs in the UK, the fly that Frank developed (which imitates the gammarus pulex - what we call a scud) was more effective than netting or electro-fishing. I can believe it. 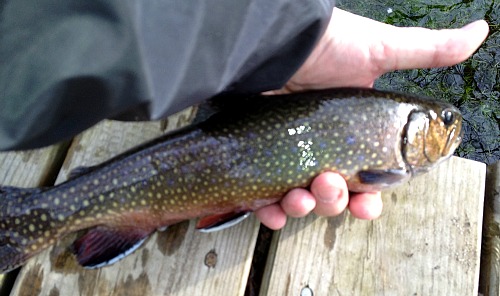 One of Terrence's first fish.

I have since seen photos of the crane fly larva, which might even be more common in our streams than scuds. It bears a striking resemblance to a killer bug, or rather, the killer bug bears a striking resemblance to crane fly larvae, and that may be what the trout are taking it for. But whatever they take it for, they do take it. I often find myself wondering, "why do I fish anything else?" Variety, I guess. Nothing I've found outperforms it.

I guess my comment above about inexpensive materials should be explained a bit, in that Sawyer tied his fly with a yarn that is no longer produced - Chadwick's 477. That yarn is now one of those almost unobtainable fly-tying materials that have achieve a near-mythical status - I would say more than polar bear hair or seal fur, more than the urine-stained fox fur for the Hendrickson (though maybe not more than the ram's scrotal hair that is, well, indispensable for the Tups Indispensable). Chadwick's 477 hasn't been produced for probably 40 years now, and when the rare card is auctioned on ebay, it goes for over $100.

Sawyer is quoted as having said, "The successful attraction of this pattern is due to the fact that the particular 'darning wool' used, completely changes colour when wet." Chadwick's 477 was a fawn color, kind of a greyish brown, but it had red fibers running through it. When the yarn was wet, the red fibers gave the yarn a pinkish tan hue.

Although substitutes are sold in the UK as Killer Bug Yarn, none that I have been able to find show the pinkish-tan color when wet.

I've also read comments on various forums that suggest that any yarn will work. I'm convinced the people who say that do so only because they haven't tried one that does turn a pinkish tan (a lot like the people who say tenkara is just dapping or cane pole fishing without ever having tried it.) I think Sawyer was absolutely correct when he said the successful attraction is due to the color. 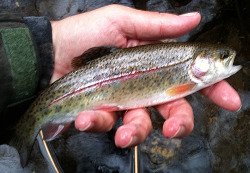 I started fishing Killer Bugs in 2008. I looked extensively for a yarn that had the "fawn" color that Sawyer described, and also had red fibers running through it to give it the pinkish hue when wet.

The yarn I settled on then (and still use today) is an off-white, too light even to be called "oatmeal." But it does have the red fibers running through it. To give it the requisite tan color, I use an artist's Prismacolor marking pen (the color of the pen is "Sand"). The resulting fly, which turns a definite pinkish tan when wet, is a very close imitation to the scuds that have a pinkish hue. I have finally gotten a very small sample of the original Chadwicks 477, and the Sand marker I use is just a little too tan but the trout don't seem to care. If they don't why should I?

The fly is tied with copper wire instead of tying thread. The copper wire provides a little bit of extra weight, but not nearly as much as a lead underbody or even a beadhead. (With a soft rod and a light line, you can still tell it's a weighted fly, though.) I believe Sawyer used a varnished copper wire that had a slightly reddish brown color, but it seems you can't get that color anymore. I just use regular copper wire. 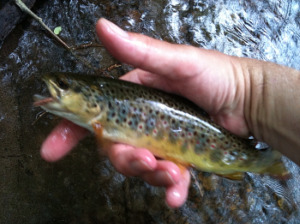 They're not just for stockie rainbows, either. This wild brown was fooled.

Scuds can swim - fast - and for a time I fished the killer bug with quick tugs to mimic a scud's swimming action. Having fished with a truly Hi-Vis Fluorocarbon level line, and having seen strikes that I'm sure I wasn't seeing before, I now think a dead-drift approach may in fact be a better technique.

I don't know that quick tugs to give action to the fly causes more strikes, but it certainly causes your line to bounce around, and if your line is bouncing around it is very hard to see the very subtle indications of many strikes.

Also, when the line is bouncing, there are times that it is slack, and a fish can spit out the fly long before you can take the slack out of the line with your next tug. Perhaps slight, gradual pulls are better than a dead drift, but I'm pretty sure that bouncy tugs aren't. 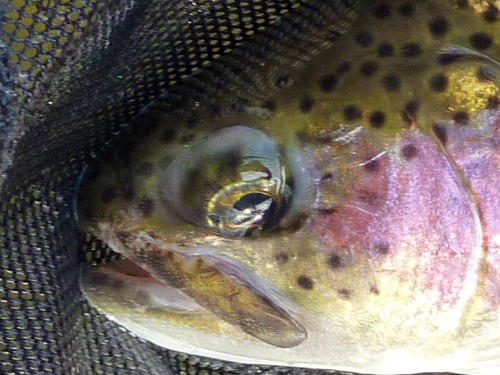 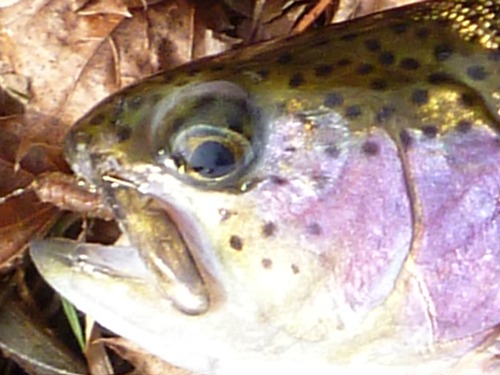 The two photos above show the same fish. Caught, released and caught again 14 minutes later with the same fly!
Can your fly do that? 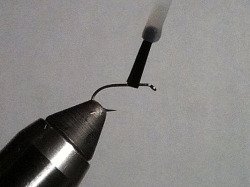 1. Because copper wire slips pretty easily when wrapped, I start by just touching the hook shank with super glue. I find the brush applicator works better. The red colored copper wire I use with the Utah Killer Bugs isn't as slick and with it I find the super glue is not necessary. 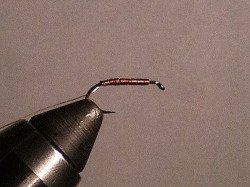 2. I now start the copper wire at the eye, trapping it just like you would with tying thread. I wrap one layer from the eye to just before the bend. 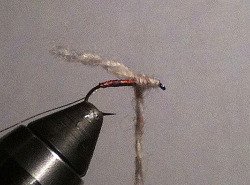 3. Start the yarn like you would start thread behind the hook eye. This photo was taken just before clipping off the tag end. Wrap to the bend, back to the eye and then back again to the bend. I try to untwist the yarn, which is two ply, so the the plies lay side by side as I am wrapping. You need to wrap tightly so the yarn doesn't start sliding around after a few fish. 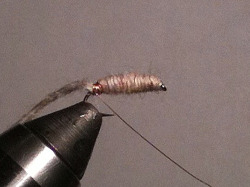 4. When you get to the bend, trap the yarn with one wrap of wire, then do a five turn whip finish with the wire (four turns if you are tying on a size 14 scud hook). Tighten the wire very gently and smoothly or it will break. When it is tightened, then break off the wire tag end. Clip the yarn tag end last. 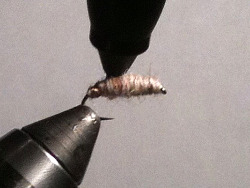 5. While the fly is still in the vise, color it thoroughly with the Sand Prismacolor marker. It will look brown initially, but as the color sinks in, the fly will take on a pinkish tan look, which intensifies when the fly is wet. Coloring it roughly with the marker also raises loose fibers, which create a bit of a halo effect, and give the impression legs. 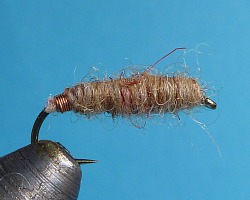 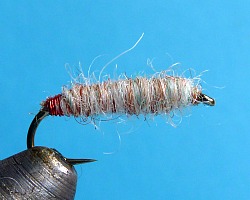 The Utah Killer Bug is an adaptation made by the Tenkara Guides in Salt Lake City, UT. In an attempt to simplify the tying process, they settled on a yarn that does not require the Prismacolor marker. I now call the yarn they chose Utah Killer Bug Yarn. It is darker and quite a bit pinker than the yarn I use for the Killer Bug. When wet, both yarns darken and both show a definite pinkish tan hue. Interestingly, the Prismacolor marker I use is not completely waterproof, so after a few uses, the yarn loses much of it's brown color and bugs tied with the two yarns end up looking pretty similar. 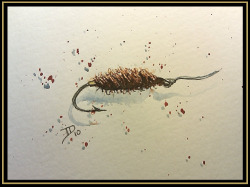 Another representation of Sawyer's Killer Bug is this watercolor by Joel DeJong. Joel set out at the beginning of 2010 with the goal of painting a different fly each day for the entire year and has documented his progress in his blog A Year On The Fly. One of the flies he chose was Sawyer's Killer Bug. The painting now hangs over my tying desk.

Here's a pic of a 12" brookie I caught today on #14 killer bug. Caught two 14" rainbows as well. These were literally the first fish I ever caught! I just ordered more killer bugs to replace the three I lost to the trees.

Thought I'd let you know that I had a chance to try my new rod, line and flies today - early season in Wisconsin opens the first Saturday in March. Despite the cold weather, I had a blast, and caught 27 trout in about 3 hours. 25 browns and 2 small brookies. I think it took about 3 casts to get my first fish  The first 17 were caught on a Sawyer Killer Bug. Not a bad afternoon, especially with the water temp. being only 38.5 degrees. Suffice to say, I'm hooked.

Hi Chris, Just a  note for you and other Tenkara fisherman. Just got back from a backpack to the bottom of the Grand Canyon. Bring your Tenkara rod! No one fishes Bright Angel Creek. The killer bug caught fish at every stop. Fall flows are the best.

Just got back from an epic tenkara trip in northern California and the Utah Killer Bug was DYNAMITE!!!! 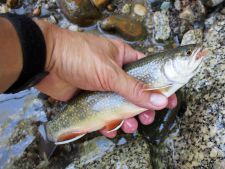 I just want to thank you for the great service. Awhile back I bought some Utah Killer Bug yarn and tied up some flies. At least out here in Utah, the fish can't resist them. I spent a day and a half up in the High Uintas Wilderness Area and caught 74 fish in about 4 hours, all on UKB's. I did try some traditional dry flies and the fish wouldn't touch them. Here is a photo from a local creek where I also had great success. 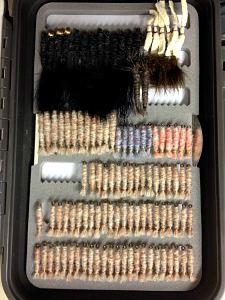 Your killer bug really is amazing. Here is a pic of one side of my fly box...hope you got a smile out of that. It's been fun. 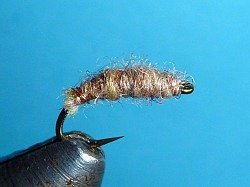