Small stream pesca a mosca Valsesiana wasn't quite what I expected it to be. It was better - much better. The impression I had gotten of pesca a mosca Valsesiana, the Italian fly fishing technique similar to tenkara that uses a stiffer rod, longer horsehair line and a cast of four reverse hackled flies very similar to sakasa kebari, was that it was best suited for larger streams.

Pesca a mosca Valsesiana is fine for smaller streams - you just use three flies at a time instead of four (on a particularly small stream perhaps only two). Since I had lost all my Valsesian flies to trees very quickly on the first day I tried it on a trout stream, I had mixed feelings about trying on an even smaller stream. 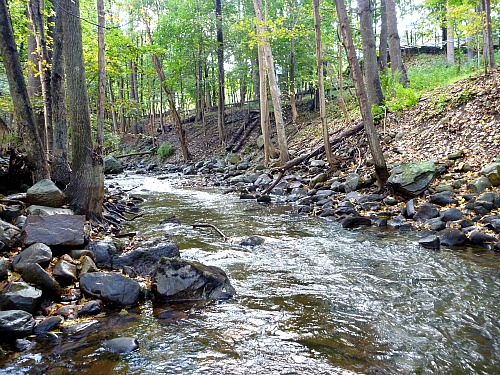 a I tried it out on a stream that is small enough I usually fish it with an 11' rod. At the time I had thought it much too small for the 13'+ rod that I had previously used for pesca mosca Valsesiana. (I have since learned that I can use the long rod, short line technique on smaller streams than I would have imagined.) As a compromise, I used a 360 rod and the size 4 Sunline Hi-Vis Fluorocarbon line instead of a heavy horsehair pesca a mosca Valsesiana line. I also had some new flies. I was as ready to try small stream pesca mosca Valsesiana as I was going to be.

One of the authentic Valsesian flies that Andrea sent me is tied with a blue thread body. He also mentioned one time that the trout on a recent fishing trip particularly liked the blue fly. I have occasionally wondered why there were no blue flies. Well, there are in Valsesia, and what's more, they work. 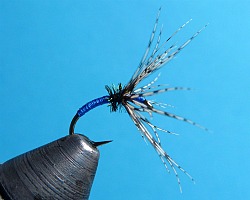 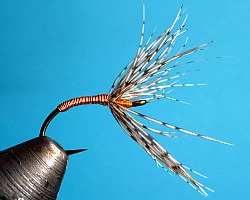 I had gotten some Royal Blue UNI-Thread to try after I had been told that blue flies were used in pesca a mosca Valsesiana (Pearsall's Gossamer silk thread no longer comes in blue although I have since acquired some and now tie my blue flies with blue silk), but for quite a while I hadn't tied any flies with it. I finally tied two, and fished with one. It wasn't very long at all before I caught a feisty 12" rainbow that just would not stay still long enough to have his picture taken. I wanted to take a picture showing the blue fly in it's jaw, but with one last flip the fish was gone and so was the fly. I held the other in reserve so I could at least take a picture.

The sakasa copperbari is also a fly I used as one of my three flies. Sakasa copperbari is a tongue-in-cheek name I gave to a fly that Laurent Marshall had written about in one of the posts on his blog. Similar in concept to the extremely popular and productive Copper John, it is a sakasa kebari with a copper wire body for a little extra weight and flash for when you want to fish a little deeper or when the water is a bit high and off color. In the deeper pools it proved to be very effective. 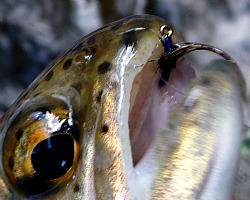