I no longer sell the kit. The instructions for making a horsehair line are on the Horsehair Lines page.

The Horsehair Line Kit solves the only significant problem that keeps most people from experiencing the outstanding qualities of a horsehair line. Horsehair lines cast beautifully. The only real problem with them is that they aren't very strong so they will break. That alone keeps most people from ever trying one. Being able to make one yourself, and better yet, to repair it if it breaks, solves that problem. (It doesn't make the line any stronger, but it makes a broken line a fairly minor event.) 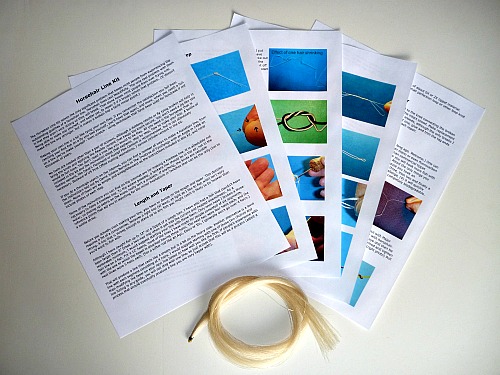 Making your own line is a bit like tying your own flies. If you remember the satisfaction you felt from catching your first fish on a fly you tied yourself, you'll have that again, and more, when you catch a fish on a line you've made yourself - from scratch - using techniques that have been used for hundreds if not thousands of years. 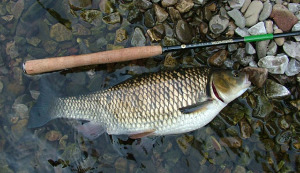 All you need is the horsehair that is included in the kit and the instruction sheet that explains, step by step, how to make your line (with photos illustrating each step). I have also included a short piece of 2X tippet material for a line to tippet connection and a short piece of braided fly line backing for the line to rod connection.

A bottle of flexible cement, like Dave's Fleximent or Rumpf Flex Cement, or a tube of Loon UV Knot Sense will make the knots more secure but is not necessary. I rarely use it anymore, and have not had any of the knots come undone. 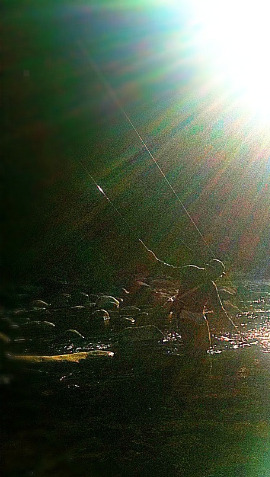 One hank of horsehair, sold online as violin bow hair, contains enough hair to make several lines. How many you can make depends to a large extent on the length and taper chosen for the lines you make and the number of hairs you break in the process. You must break some, because each hair is briefly tested for strength before being used.

If you do a thorough search on the internet, you can find a number of ways to make a horsehair line, from the instructions laid out by Dame Juliana Berners in The Treatyse of Fysshynge wyth an Angle in 1496 on down. None of them are as simple and straightforward as the method used with this kit, and none include photos of each step.

Some of the instructions you can find on the internet are for making a knotless line. It is absolutely not necessary to have a knotless line. To the extent possible, a tenkara line should be in the air, not in the water, so picking up debris on the knots really isn't a problem. If anything, the knots are valuable reference points that aid you in watching for the minor hesitations or twitches that can be the only clue to a subtle strike.

Even if you are fishing as the European and British anglers did before reels were used for trout fishing, and the Valsesian anglers do to this day, the line should be kept off the water's surface to the extent possible. Truly, knots are not a problem. 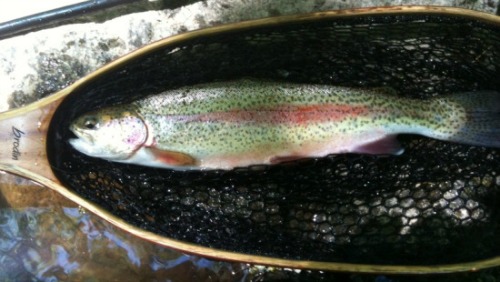 12" rainbow caught on a single-horsehair tippet

I wanted to say thank you for a fantastic job with the horsehair line kit! I've had my own experiences with making furled mono, fluoro, and kevlar lines before, and I can tell you that after using your instructions, I'll never go back to my furling jigs. Well done! From start to finish my first line could not have taken more than twenty minutes, and the quality of the horse hair was top notch. Thank you for putting together such a well thought-out product.

I recieved my horse hair kit 2 weeks ago. I made my first line and it was so easy. I found it a little light however. I made my next one a bit heavier. Casts and turns over great and lays the fly on the water with hardly a ripple. Hooked a fat 15" today who jumped 6 times, and landed him without a net. Love it and just wanted to say thanks. I see no reason to fish anything but my own horse hair lines.

I bought a horsehair line kit from you, and it worked amazingly well. I ended up making a few different lines, one with only a single hair at the tip (instead of a tippet or anything else), and it was amazing the size of fish you could pull in if you let the flex of the rod take the beating.

Made up a couple of horse hair lines. Have not fished them yet due to high water but have cast them. Think they are wonderful .

After receiving the Kurenai HM33R on Thurs, I spent that afternoon and Fri. casting in my yard like I always do, different lines and lengths. I settled on a 8-9' pc of #3 fc and an 8' horsehair line of 3x5,2x4,1x3 [3' of 5 hairs, 2' of 4 hairs and 1' of 3 hairs] with a short #3 fc extender. These lines and lengths are going to be my penultimate small stream killers.