I was not a happy camper, but not because Adam was catching more fish. It was because the fish were there and they were hitting - or rather Adam was able to get them to hit and I couldn't. So it wasn't that he was "beating" me, it was that there was obviously a method that worked but I couldn't figure it out. 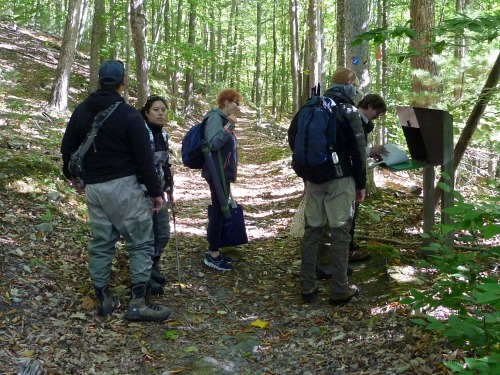 NYCTAC Neversink Trip
Signing in and reading the warnings about bears and rattlesnakes.

There were several of us on the trip, organized by the New York City Tenkara Anglers Club. I don't think everyone caught fish, but most did. Adam caught the most, by far.

When we all got together for lunch I quizzed him on what he was doing and on what was working. It wasn't the fly - he caught fish with a couple different flies. One technique caught all the fish, though. He cast right into the little "plunge" at the head of a pocket, let the fly sink a bit and then started to gently pulse the fly. All his fish were caught while he was manipulating the fly.

Up until then, I had not been manipulating my flies. I frequently fish with a Killer Bug, and the takes are often so subtle that they can easily be missed if the line is bouncing from my manipulations. Many times the line will just barely twitch or just barely slow. If I am causing the line to move, and a fish takes between pulses when the line is slack but spits out the fly before my next pulse, there is no way I would tell that there had ever been a take. 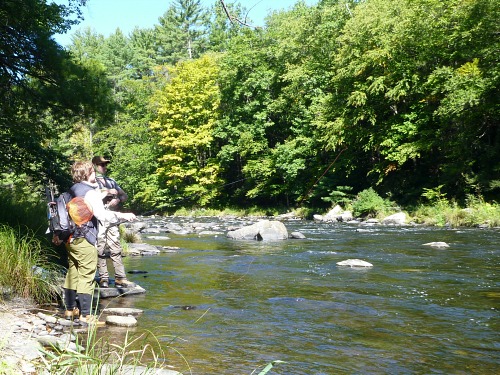 Lunch break with rock garden just ahead of us.

Just upstream from where we stopped for lunch there was a rock garden with lots of pocket water in which to try Adam's technique. It did not take very long for a brown trout of 9-10" to leap completely out of the water hitting my Partridge & Orange Sakasa Kebari. I was so surprised I broke the tippet on the hook set.

The previous weekend, I had fished with 10X tippet and after breaking off the first couple fish on the hook set, settled down and just tightened the line rather than setting the hook. I caught a lot of fish but had a couple really fairly modest fish break off when they started to run and the force they generated exceeded the tippet's strength. I had decided on that trip that 10X is a bit too light, and so I was fishing with 9X on Sunday.

I do think that a light tippet does improve presentations, but tippet as light as 9X is probably much better suited for ultralight bait fishing than for fly fishing, where if you are not extremely quick the fish will spit out the fly. I spent the rest of the day fishing with 8X and did not again break the tippet. I am sure that most anglers would use heavier tippet than that, and I cannot fault them for that decision. Also, if you are manipulating the fly, it probably doesn't matter a bit if you use 5 or 6X rather than 8 or 9X tippet. 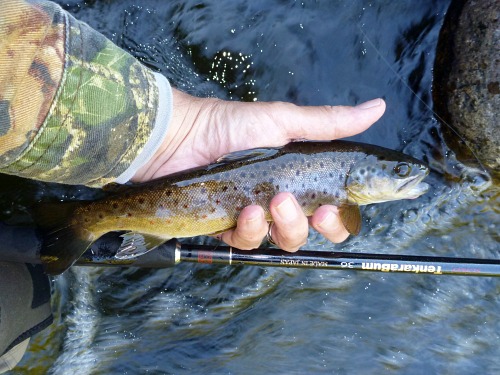 My one and only trout for the day.

I did miss a couple other hits but then got a solid hook up on the brown trout above. After I dropped the fly at the head of the pocket, waited just a couple seconds and then pulsed it a couple times he hit right at the back end of the pocket. All of the hits I got while pulsing the fly were aggressive enough that there was no mistaking them for my own line bouncing. On second thought, all the ones I noticed were aggressive.

The day was not a many day (at least for me) by any means, or even a few, or even a two! However, the difference between zero and one is substantial, and one is enough.

It was a bit of a hike in, a longer, harder hike out and I'd only caught one fish. Still, it was a good day. If nothing else, it was a reminder that fly manipulation does work and definitely should be in your bag of tricks. I'm not sure you need a dozen different variations of manipulation, but there may be times when subtle differences matter. I just don't know.

It was also quite interesting to realize that the precise casting and fly manipulation were much easier to accomplish once I switched from a 6.3m rod to a 3.6m rod! The long Suntech Kaname 2H63 is a better rod choice for fishing dead drifts, but the shorter TenkaraBum 36 worked much better for the precise placement and pulsing that Adam suggests is the essence of Japanese tenkara.

It was very interesting to talk to Adam on the ride back to the city about his recent trip to Japan and his take on the difference between what the Japanese call tenkara and what we call tenkara. My impression from what he said is that to them, it is a lot more than "just fishing" as I have frequently called it.

The tenkara experience includes the camaraderie of the group, the eating, and definitely the drinking! The fishing itself also seems to be a bit different, and although catching fish is nice, and everyone wants to catch fish, how they catch fish seems to be just as important. Although every tenkara angler will have his own style, at least in the groups with which Adam fished the similarities are a lot greater than the differences.

All share the unweighted fly, the precise casting, the short drifts, and in the right circumstances the manipulation in an attempt to induce a strike. The Google translation of the manipulation often comes out as "the invitation" which now seems quite apt. It almost sounded like there was a bit of a ritual involved. The overall impression was that if they made a movie about Japanese tenkara they should call it "Dances with Trout."