Sunday was a bust. I caught a small creek chub and a small bluegill so I didn't get skunked, but I blanked on all four of the target species on my list. I started the day fishing for bridled shiners in a spot where I have caught them twice before. They were there, and they were hungry, but the size 20 white beadhead black Killer Bugger was too large for them. The ones I had caught before were all on tanago hooks.

I did catch one creek chub while fishing for the shiners, but I didn't even take a photo. I'd only just started fishing and I was pretty sure I'd hook (and photograph) one of the shiners. Note to self: digital photos are essentially free. Take lots.

The second spot was a stream where I'd caught rainbows and also yellow perch - both of which were on the list. Both of which are still on the list. The perch weren't there (or weren't interested) and the water level was so low that I wasn't at all confident about the rainbows. Given that the next two stops also held rainbows, I decided to go to the little feeder stream where I had caught blacknose dace a couple times in the past. I ran into the same problem as with the bridled shiners. The fly just seemed too large for them to take. I've caught a couple blacknose dace on larger flies in the past, but they were larger dace in a much large stream.

The third spot was a big disappointment. I almost always catch fish there, and have had some very good days. I missed three hits, and caught nothing at all. It is a very short stretch of stream, though, and I was not the first angler there. I was fishing a heavy nymph with a relatively soft tipped rod, so in retrospect I guess I shouldn't have been surprised. Why would I, of all people, fish a heavy nymph with a soft tipped rod, you might ask. More keiryu experiments, I'd answer.

The Daiwa Kiyose 43M is a rod I like quite a lot. People routinely fish it with 4X tippet for large trout and carp. Some might be surprised that it is also rated for a tippet as light as 7X. One of the things I have always liked about the rod is that it is a bit softer than many keiryu rods and is quite capable of casting a light tenkara line.

That softness does seem to be a disadvantage when fishing heavy nymphs, though. The Kiyose SF or the Nissin Sensui I'd fished on the same stream a couple weeks earlier would do better (and did in the case of the Sensui).

The next and last stream of the day was one I'd looked forward to all week. It is the closest stream that is open enough to fish long rods. I'd wanted to take my Daiwa Tryan Zero (6m - 6.5m) to a trout stream ever since I'd gotten it. I'd fished it in lakes and caught bluegills, a golden shiner, a black crappie and a couple smallmouth bass, but I hadn't tried it on a stream for trout.

I've written a couple times that keiryu anglers in Japan use light lines. The Daiwa Zero rods take that to an extreme. The Tryan Zero I have is rated for Japanese line sizes .3 to .1. By way of comparison, Varivas 7X tippet is .4 and 10X is .15. One of my customers has an EP Zero rod, which is rated for an almost unbelievably light .175 to .08 line, which is less than 1 lb test. (That's the rod my competitor's website says is ideal for carp and pike!) I do sell .08 line - for micro fishing - but his EP Zero is a 7 meter rod intended for trout. He told me he caught an 8" cutthroat with it and reported "That rod is so, so sensitive." I believe it.

I wanted to see how light a fly I could cast with the Tryan Zero using 10X line. My assumption was that the line would weigh so little that it wouldn't take much weight to pull it. The problem, though, is not the line. It is the yarn markers, which add enough wind resistance that they act like a parachute. A size 20 Killer Bugger with a 5/64" tungsten bead lost momentum and then slowly drifted straight down to the water's surface. I spent most of the time on that stream fishing larger, heavier flies.

I'm definitely not used to fishing with 10X tippet, though. Even though I try to be relatively gentle with my hooksets, I broke off two fish on the strike. When I was more restrained, I missed the fish. I suspect that the extremely soft rods, designed to protect extremely thin lines, are better suited to bait fishing than fly fishing. The angler still needs to be quite gentle in setting the hook, but the fish will not be nearly as quick to spit it out. Thus, a gentle tightening of the line may be sufficient. Bait is not permitted on that particular stream, so I will have to go further afield to test that theory. Still, I think I'll get some 8X tippet, which is line size .3, the recommended upper limit for that rod. 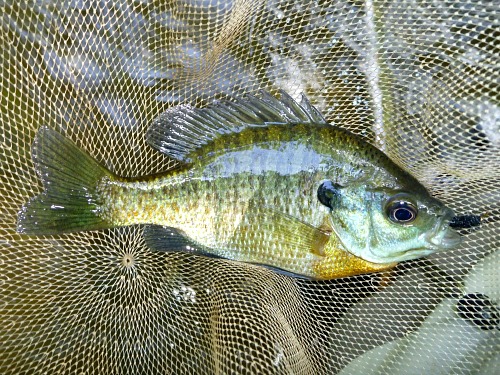 My one catch for the day with the Tryan Zero was a little bluegill. I didn't even know there were bluegills in that stream. I've fished it for years and have never caught one. This catch was after I had stopped fishing beadheads and started using a regular Killer Bugger tied on my standard size 12 Daiichi 1560. The weight of the wet yarn by itself is more than sufficient to cast with the Tryan Zero using 10x line. Considering the number of tungsten beadhead Buggers I lost to the rocks Sunday, that is a comforting thought.

I've ordered a Suntech equivalent of the Daiwa Zero - the ZPro. Luckily, it comes in a shorter length. The one I've ordered is a double zoom rod that can be fished at 4.5m, 5m and 5.4m. It's rated for the same .3 to .1 line size, weighs just 2.8 ounces, and at the 4.5m length can be fished on many of the streams I normally fish. It should come tomorrow, and I'll have something to look forward to all this week as well.

Another disappointment Sunday was that one of the stretches of that last stream I really wanted to fish had two anglers already in it - both times I checked! I think that calls for a change in strategy. For me, Friday is my slowest day and Monday is by far the busiest. I think I'm going to start going fishing on Fridays and staying home Sundays to get some of the weekend's orders filled rather than leaving them all for Monday. Mondays are enough of a shock to the system that anything you can do to lessen the blow is worth it - even if it means not being able to ask the guy standing in your favorite pool "So, what are they hittin'?"