Last Saturday was not a "many" day, but it was a successful day. I went to the Farmington River in CT with Adam K and Jon R. My intention was to fish either the Minimal Dace or a Muddler Minnow the entire day. Ah, the best laid plans...

The parking area by the first place we had planned to fish had more cars in it than I had ever seen before. We quickly decided on Plan B. Although I have done well at the Plan B spot before, at that time I was keiryu fishing with worms. On Saturday the fish would have nothing to do with either a Minimal Dace or a Muddler Minnow.

A guy across the river caught a fish on a caddis pupa fished deep - probably much deeper than I was getting with either of my flies. I put on an Overhand Worm with a BB shot about 6" above the fly. After a few casts I had a fish. It wasn't huge, but it meant the day would not be a skunking. 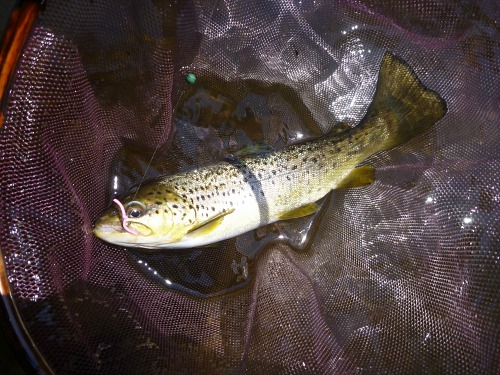 After we had fished the extent of that spot pretty thoroughly we went on to Plan C. Plan C was crowded so we went straight to Plan D.

Plan D surprised me. I fish pocket water a lot. In front of, beside, behind rocks - fish hold in all those areas. There were quite a few exposed rocks in Plan D, but either none of them held fish (which I don't really believe) or the fish they held had no interest in a Minimal Dace (which I don't want to believe, but is more likely than that they weren't there to begin with). I continued on upstream.

I have learned over the years that a bit of relatively flat, quiet water in the middle of a riffle will often hold fish. It would be interesting to don snorkling gear to see what the river bottom is like there, why the water on the surface is quieter than surrounding areas, and why the fish are there - but I know I'll never do it. I'll just have to accept that there are often fish there without understanding why (kind of like accepting that gravity works without understanding why).

In the next fairly quiet area further upstream I hooked a fish. The take was not at all like the sharp jolt I have felt from previous trout taking the Minimal Dace. All of a sudden there was just weight on the line. The brookie took the fly in fast water and hooked itself. The current was fast enough that even though it was at least a 9" fish, it was immediately "surfing" on the surface at the end of a tight line. I have to stress that by "quiet" I don't mean an area of minimal current, I just mean an area with a smooth surface surrounded by chop. 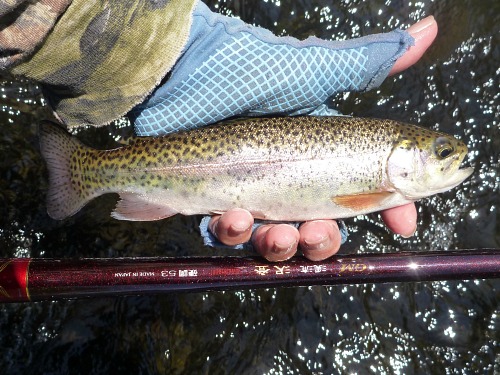 A bit further upstream, in another "quiet" area, that in this case did actually look like the current was a bit slower than the surrounding area, I hooked a rainbow that was a bit bigger than the brookie. This fish was able to stay under the surface for a while, but before long it, too, was sliding on top of the water. Not only was the current still pretty fast, the overall area was pretty featureless. An angler who only fished "structure" would have walked right by it.

I had been fishing the Minimal Dace mostly straight across, letting it drift downstream before the pressure on the line caused the fly to swing across the current to a spot directly below me. I am sure there was drag from the very beginning of the drift, so the fly would have been "swimming" almost from the moment it hit the water. I had tried pulsing the fly earlier in the day (without success) but I am not at all convinced that pulsing is a natural presentation for a fly that is supposed to imitate a minnow.

Granted, minnows do occasionally swim in stops and starts, but not when they are where they don't want to be - and out in the middle of the stream, in heavy current, is not where they want to be. In that case the pauses in a pulsed retrieve have to be unnatural. A real minnow wouldn't pause - especially if a big trout was following it. It would get out of there as fast as it could.

The hits I had gotten so far occurred as the fly was starting to accelerate across the stream. And then the pattern changed. I got a hard hit as the fly was drifting pretty much straight downstream (although I am pretty sure there was some drag pulling it forwards at the time). Again, the fish hooked itself on the hit. This time it didn't just slide on the surface, though. This was a much larger fish.

Although I knew it was a nice fish from the initial moments of the fight, I didn't recognize how big it was until I tried to net it. It literally would not fit in the net. I was using a standard sized tenkara tamo with a hoop diameter of just over 9". I've netted 18" fish without any problem in a net that size. Not this time.

On my first attempt at netting it I couldn't get enough of the fish into the net so when I lifted the net the fish fell outside the net. I'm lucky that the hook didn't come out right then. I tried again and got enough of the fish into the net that I could lift the net and the fish out of the water. My other hand, still holding the 5.4m Keiryu Sawanobori, was trying to hold the fish down so it wouldn't flip out. It was a losing battle, though, and I could not keep the fish in the net. It was just too big for a tenkara tamo. With one mighty flip it slipped past my hand and was out of the net. This time the barbless hook came out and the fish was free. I was going to release it anyway, but I would have liked to measure and photograph it. That is very hard to do when alone if the fish is of any size. I would guess that fish had to be at least 20".

I found it very interesting that the fish I caught on the Minimal Dace bucktail were all caught in pretty fast water - faster than I normally fish, and more featureless than I normally fish. That opens up an awful lot of water that I don't think of as being "tenkara water." Just as I'd learned last year that much of the Beaverkill, which also isn't what I consider to be tenkara water, was suited to keiryu fishing, there is a lot of water that seems to lend itself to streamer fishing more than to either drifted or pulsed kebari. The more I push the envelope for "tenkara" fishing, the bigger the envelope gets!

I was also a bit surprised that a fish of that size would hit a size 12 Minimal Dace.

I was not the only one to catch fish. Above, Adam K holds his rod low and to the side to pressure a nice fish he hooked on a bead head nymph. There has been more information shared on handling big fish in the last year, with Rob Worthing's presentation at the 2015 Tenkara Jam and Daniele Beaulieu's article in the summer 2016 issue of Tenkara Angler magazine. Adam says he learned a lot about fighting larger fish from watching the Shimano videos of tenkara anglers catching salmon and steelhead in Canada, Alaska and Japan.

We later tried Plans E and F, but they were anticlimactic. The only thing of note, really, was that I learned that ducklings like sulfur spinners! 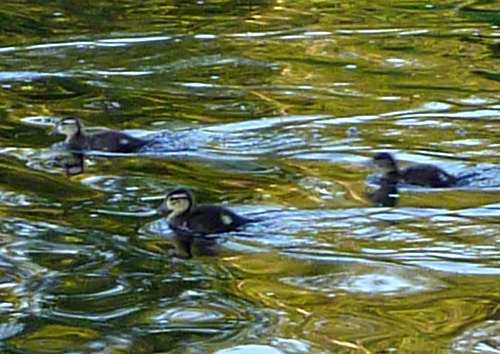 A brood of ducklings patrolled a pool, coming close to where I was standing to get a spinner and then rushing away. They would often race each other to get to a spinner that two or three had seen. The trout got a few of the spinners, but the ducklings got the vast majority.