The Minimal Dace is the simplest fly I could devise to mimic the brown over black over white color pattern of the blacknose dace.

Many species of small fish have similar coloration - brown back, black line down the side, and white belly. Art Flick's Blacknose Dace is the best known fly with that color pattern, tied to imitate the blacknose dace common in his home waters in the Catskills. Flick tied the fly with brown bucktail over black bear hair over polar bear hair. The fly had a silver tinsel body and a short tail of red wool.

If you are not a very skilled tyer, getting three colors of hair to stay in discreet layers is well nigh impossible. Besides, few tyers have black bear hair, and almost no one in the US has access to polar bear hair.

I thought a blacknose dace imitation would be much simpler if the black stripe was represented by black thread wound on the hook shank. The brown back of the blacknose dace could still be the brown hair on the back of an easily-sourced bucktail, and the white belly could be white hair from the same bucktail, tied in as a throat. Thus, a bucktail and a spool of black thread would be the only materials needed. 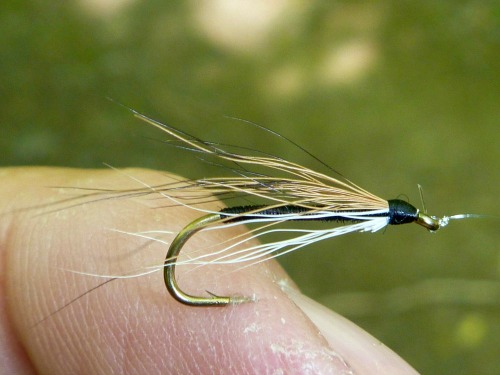 Prototype, with several white hairs trimmed because there were too many.

I have now fished with several variations of the fly, and it seems effective enough to do a step-by-step tying description. 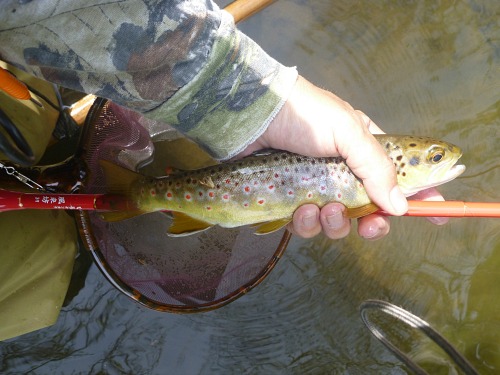 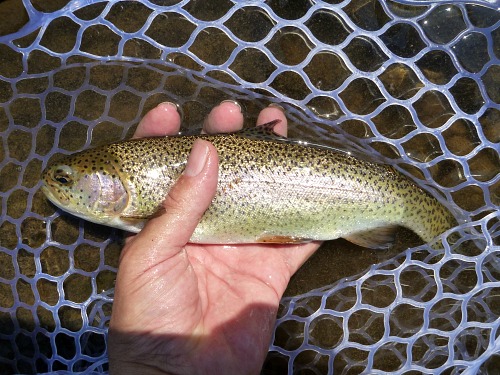 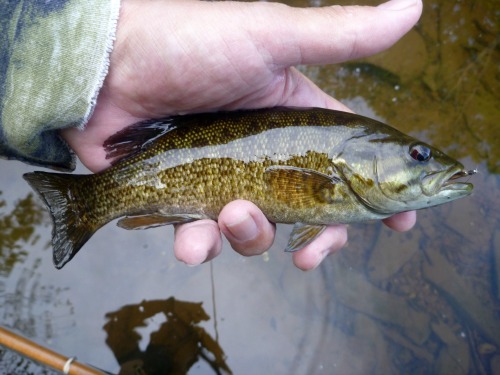 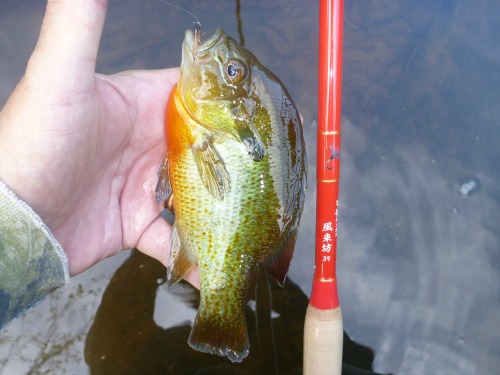 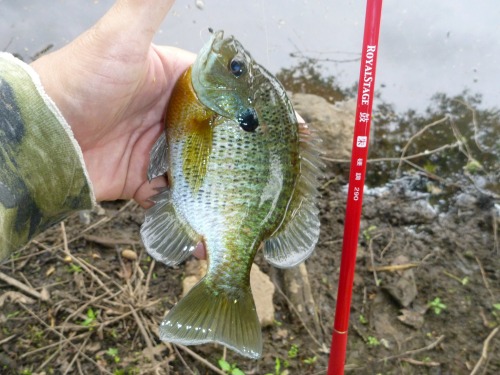 A few of the fish caught with a Minimal Dace prototype.

I have been asked several times how you can possibly fish a streamer with a tenkara rod.

First (and not really an answer to the question), the Minimal Dace is a bucktail, not a streamer. A streamer has a feather wing, like the classic Grey Ghost. A bucktail has a hair wing.

Second, it is really easy to fish the Minimal Dace. Just hold the rod to one side and bring the rod tip further back. That will pull on the line and move your fly. You can vary the pull faster or slower, steadily or with twitches.

It is a very simple fly to tie, and it is surprisingly effective.

1. Put the hook in the vise upside down. Start the thread just behind the hook eye. If you hold the tag end at an angle as you wrap the body, it will help produce a smooth body with no gaps. Hook shown is a Daiichi 1720, size 12. 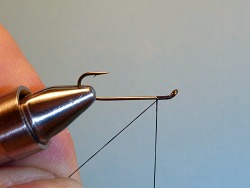 2. Wrap as close to the vise jaws as you can, clip the tag end of the thread and wrap back to near the hook eye. Where you stop wrapping is where the head will start, so if you stop far back you will end up with an unusually long head. 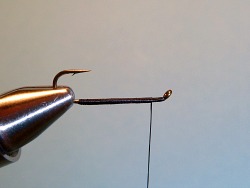 3. Cut a very small bunch of white hairs from a bucktail. Pull out the longest and shortest ones, leaving only 7 to 10 hairs that are roughly the same length. They should extend to just beyond the hook bend. 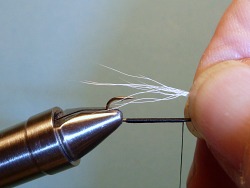 4. Tie them down with 2 wraps (so you can adjust them if necessary but they will stay where you leave them). 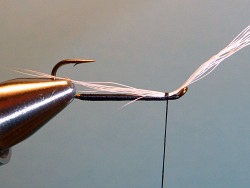 5. When they are positioned where you want them, make a couple tighter wraps toward the hook eye. Clip the hairs, being careful that the cut ends do not block the hook eye. Finish wrapping to the eye. Then tie a half hitch to hold the thread in place. 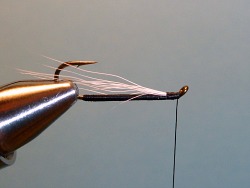 6. Remove the hook and put it in the vise in the normal position, being careful not to crush any hairs between the hook and the vise jaws. Wrap back to where you started tying in the hairs. 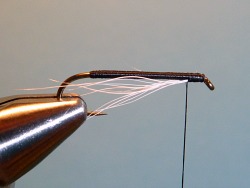 7. From the top of the bucktail, cut a bunch of brown hair that is only a bit larger than the bunch of white hair. Do not take it from the very base of the tail because the hair there is hollow and will flare much more than you want. Pull the longest and shortest hairs from the bunch so the remaining hairs are about the same length. The brown hair should be only slightly longer than the white hair. 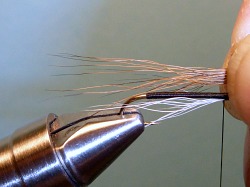 8. Tie in the hair with two wraps and adjust it as necessary so the whole bunch is held together tightly at the top of the hook shank. The two wraps should not be too tight, because you don't want the hair to flare. 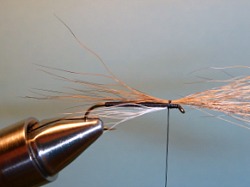 9. After the two loose wraps, take two or three tight wraps toward the hook eye to hold the hair securely. Clip the ends at an angle, making sure that none extend far enough forward to block the hook eye.  Be careful also that you do not cut the thread on top of the hairs. 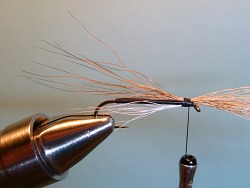 10. At this point, I put a small drop of head cement or superglue on the exposed hair butts. It may not be necessary, but it will make a more durable fly. You may have to remove excess cement with a tissue or bit of paper towel. 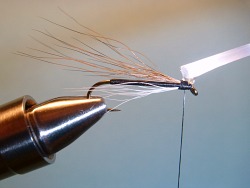 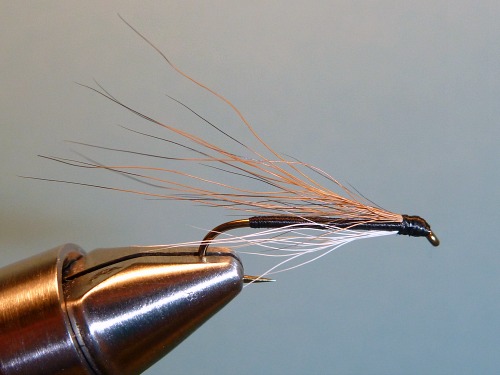 11. Finish wrapping the head and tie a whip finish. Be sure to check that the hook eye is not glued shut!

The Minimal Dace should be quite sparse. You want to give the fish the impression of what might be a fleeing minnow, with the right color pattern, shape, size and movement. You do not want to give them a very clear view of something that definitely isn't real.

The Blacknose Dace is common in even very small streams - small enough and shallow enough that you may be plagued with snags as your bucktail catches on rocks and sticks, particularly as you are playing the line downstream below you into the next pool.

An effective adaptation of the Minimal Dace is to tie it on a 60 degree jig hook like the Daiichi 4640. If you keep the white belly quite sparse (as it should be) the fly will reliably swim hook point up.

Brookie caught on a Minimal Dace