The Killer Bugger, the Overhand Worm and the essence of tenkara.

When I first started fishing with a tenkara rod my go-to flies were a CDC & Elk and a Killer Bug. Neither would be considered tenkara flies in Japan - although there are anglers in Japan who fish an Elk Hair Caddis with their tenkara rods. They may not be the elite anglers who are featured in Western videos but you can be sure they exist.

Over time, my go-to flies have changed a bit. I don't fish as many small streams now, and it was always on the small streams that the CDC & Elk was the top fly. On larger streams, the Killer Bug has given way to a black Killer Bugger (often tied with a bead head).

Most of the streams I fish these days are not the high gradient mountain streams on which tenkara was developed and on which it remains the most productive method. I often fish waters that are modest or even low gradient. Waters on which you could fish all day and not find a decent plunge pool. Waters where if there isn't a hatch (and there usually isn't) the fish are not likely to be looking up. Waters where the fish do not have to make a split second decision to eat or not eat. Waters where you could fish an unweighted kebari and just know it was not getting down to the fish and the fish were not coming up to get it. 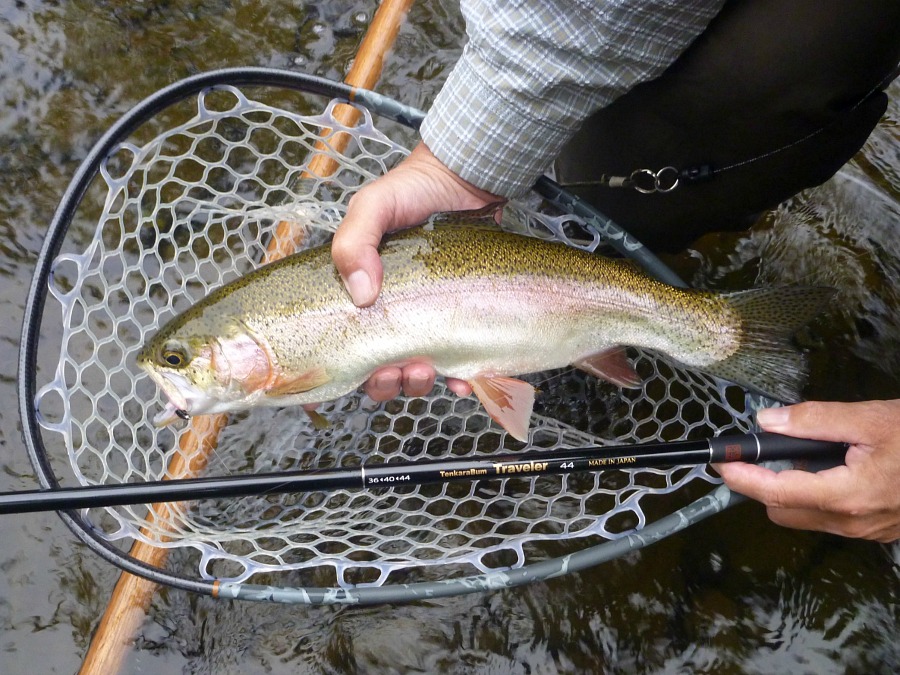 The bead head Killer Bugger isn't as au courant as a Perigon nymph and doesn't penetrate the water column as quickly, but a size 18 bead head Black Killer Bugger looks an awful lot more like the "3/8 of an inch long and black" that is said to make up most of what trout eat. It does catch fish.

Last weekend I wanted a shot of a nice trout along with the new TenkaraBum Traveler 44. The fly I chose was a bead head black Killer Bugger. I was fishing a very large, very deep pool, and I knew that at least some fish would be right at the head of the pool where the depth increases pretty quickly. I wanted a fly that would drift along the bottom at the tail end of the riffle above the pool, and then follow the bottom contour as it dropped away. It worked. 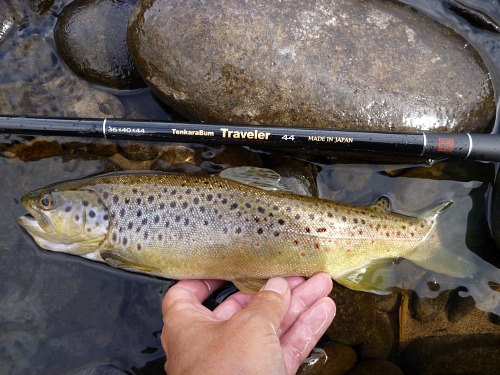 The previous weekend I was fishing the Beaverkill River in the Catskills, also trying to get a nice shot of a trout with the TenkaraBum Traveler 44. The photo above is the one that made it onto the TenkaraBum Traveler page (until it was replaced by the photo of the larger trout). The photo does not show the fly, which came out in the net (I've come to appreciate barbless hooks). 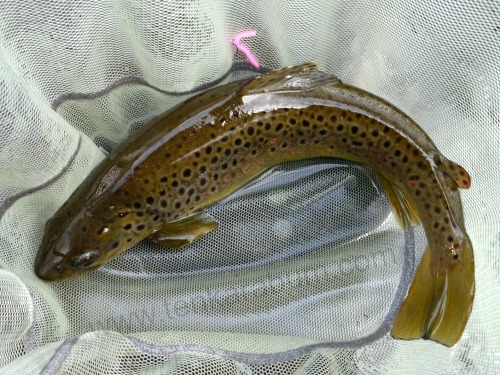 Photo showing the fly that took the trout

This photo, though, shows the fly that caught the fish - none other than the Overhand Worm. That's truly not a tenkara fly! However, on the streams I usually fish, bouncing along the bottom with a BB shot, it outfishes an unweighted kebari by a wide margin. 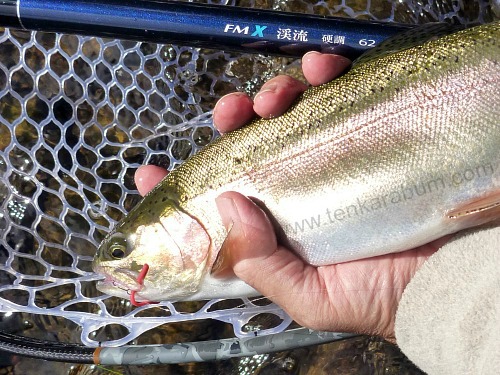 A Squirmito (Squirmie Wormie) works (whether purists like it or not).

And then, there's the Squirmito, which many people wouldn't even say is a fly, let alone a tenkara fly. Does it even matter?

No if you are more interested in catching fish than in fishing in a particular style. No if you truly believe the fly doesn't matter (to the fisherman as well as to the fish).

No if you agree with the concept presented by Go Ishii in the third Discovering Tenkara DVD. When commenting on bead head flies, he said that in the winter, when fishing for wild trout in wild streams is closed in Japan and tenkara anglers gather to fish for stocked rainbows, using bead head flies is OK. After all, it's not fishing for wild trout in wild streams, so the "rules" don't apply. In other words, it's not really tenkara so it doesn't matter if the fly has a bead head. By extension, if you are not fishing mountain streams it doesn't matter if you are have a rubber worm on your hook instead of a feather.

On the other hand, it does matter if you are fishing a small stream with lots of complex current seams, where the fish are always looking up because the stream is infertile and the fish can't afford to pass up what might be food, and if you truly enjoy the delicate casting and fly control that is possible only with tenkara.

For years I wrote that the essence of tenkara is keeping the line off the surface. I now believe that is only part of it (and maybe just a small part at that). What really separates tenkara from all other fishing styles is the delicacy of the presentation and the ability to control the drift of the fly through line control and fly manipulation. If you are not fishing a stream with complex current seams, there isn't the same need for pinpoint casting and short drifts. You do not need the same degree of fly control - fly control that you can only get with an unweighted wet fly!

Fishing a bead head black Killer Bugger, to some extent, but especially either an Overhand Worm or a squirmito with a BB shot really is quite a bit closer to keiryu fishing than tenkara. You clearly can make accurate casts and short drifts. You can manipulate the fly - Liesenring Lift style - but just the weight on the fly or on the line changes the dynamic. The casting is not the same, the drift control is not the same - the delicacy is not the same.

The following was written years ago, describing a rod I no longer carry. "What I also found interesting was that the rod is clearly best with an unweighted fly. Even the minimal weight of a Killer Bug affected the cast. To be clear, the Shimano with the size 4 level line will cast the Killer Bug, and would certainly cast a Czech nymph or woolly bugger or Dave's hopper. It's just that with an unweighted fly, the cast is a thing of beauty. With a weighted fly the cast works, but the beauty is gone."

Somehow over the years I got sidetracked. I find it very interesting that only after spending a lot of time keiryu fishing (with real worms, not just the chenille or rubber ones), and more recently spin fishing and fishing with ultralight baitcasting rods, I am coming back to the view that for tenkara, with a weighted fly the cast works, but the beauty is gone. 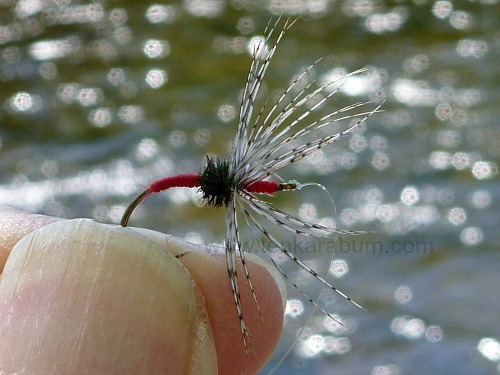 An unweighted wet fly will allow the most finesse.

What brought me back to that view was spending time with my Finesse-Fishing.com website, thinking about stream fishing with flies, live bait and lures - and particularly with ultralight baitcasters, which exist in Japan for fishing small mountain streams for trout, but which are unheard of here in the States. I really got to thinking about the finesse that is achievable with the ultralight Japanese trout rods compared to the American bass rods.

When thinking about finesse, though, after a while it became clear that the ultimate in finesse, certainly in a small mountain stream, is fishing an unweighted fly with a light level line and a tenkara rod. I guess the essence of tenkara, then, what really makes it unique, is the delicacy of the presentation and the control over the drift of the fly - and importantly, working with the eddies and seams and currents to get the drift you want. It's not the simplicity of the gear that makes tenkara interesting, it's the complexity of what you can do with it.

You can cast spoons or worms or bead head buggers (and almost certainly catch more fish) but it's just not the same.

Really enjoyed your article this morning. I think you nailed it.

I can present the fly delicately and get it to drift where I want it to, and my fish-catching has gone way up.

The other morning I fished a little urban stream that NO ONE else fishes, with my Suntech Keiryu Special 27 and an elk hair caddis, and caught gobs of fish. Those fish had never seen an artificial fly.

The rod and technique allowed me to land the fly like a whisper or a wish, and I could drift it under trees, near the bank, around rocks & roots . . . and that makes ALL the difference!

Great post, really captures some of the struggles I’ve had trying to explain Tenkara fishing to friends who are strong western fly style fishers. Using simple gear to delicately and with finesse complete a complex task...the struggle is real, the beauty is real. I love catching fish.