The Nissin Sasuke  has been discontinued. I cannot get them anymore.

One of the problems with the tanago rods I have carried previously is that they really were limited to pretty small fish. One customer broke two of the Shimotsuke tanago rods - one when he caught a much larger than expected sunfish and the other when the micro he caught was eaten by a much bigger fish as he was bringing it in.

In a moment of foolishness, I tried a Shimotsuke tanago rod in a brookie stream, expecting to catch a little 4 incher in a small bank eddy. I truly thought the 6-7" fish I actually did hook was going to break the rod. 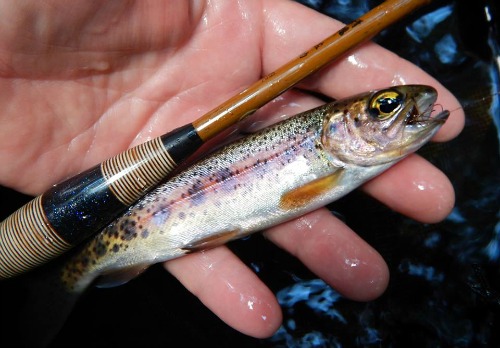 As JJ's photo above shows, the Sasuke is quite capable of handling the little wild rainbows found in the Smokies and the southern Appalachians.

One evening in Maine I had fun catching redbreast sunfish just outside the cabin with a Daiwa Hinata, using swatted black flies for bait. Luckily, those I caught were pretty small, but there were larger sunfish and smallmouth bass in the area as well. Even a small smallmouth would have been too much for the Hinata.

The Nissin Sasuke could have handled all those fish. It is a short rod but it packs a punch. It is rated for 6X tippet! I wouldn't go out looking for 12" fish with it, because after all, a 4 foot rod can only bend so far, but I wouldn't be afraid to fish for dace where I might end up catching a brookie instead - or actually fish for brookies in a stream so tight that you need a 4' rod to fish it! 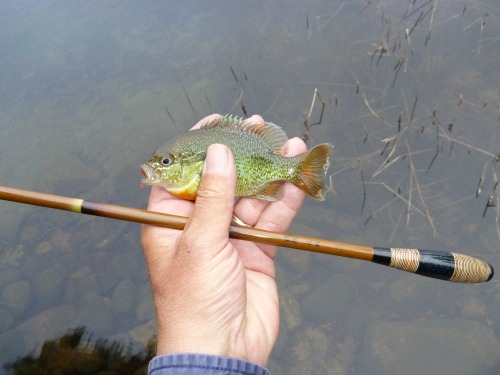 Small sunfish are a lot of fun on a Sasuke

That said, the rod is not too stiff for even pretty small fish. The redbreast sunfish above, caught outside the cabin on this year's Maine trip, was only about 3" long yet still put a satisfying bend in the rod.

The stiffness may actually be an advantage for trying to catch darters, though. Many darter species are found in riffles, and you have to pretty much anchor your bait on the bottom right in front of them with a split shot heavy enough to resist the current. This rod could handle that easily.

Another major difference between the Nissin Sasuke and other tanago rods is that it is much longer when collapsed. The Sasuke is almost 15" long when collapsed, compared to just over 10" for the tanago rods I've had previously. It still fits in a Small Rod Case, though, and I would definitely recommend getting the case for it

When the Japanese hear the name "Sasuke" they think Ninja.

Perhaps the most famous mythical ninja of all time is Sarutobi Sasuke. As is often the case, though, the myth has a basis in fact. The mythical Sasuke may be based on the real ninja, Kozuki Sasuke.

From 1999 through 2014 a very popular manga series, Naruto, featured a character Uchiha Sasuke (the sole survivor of a powerful ninja clan). There have been at least eight or nine other fictional ninja characters who were named Sasuke.

The name Sasuke for a fishing rod connotes small, quick and powerful. That's actually not a bad name for this rod.

The grip itself is a teardrop shape, as were those of the other tanago rods I've carried. The Nissin Sasuke, though, has a clear coat over rattan (or more likely, a synthetic painted to look like rattan) and over a center section that is black with sparkles.

Although the grip shape is nothing like the tenkara or keiryu rod grips you might be familiar with, for a rod this small it works quite well. Kids will hold it with the grip in their palm (and these could make great kids' rods). I hold it with the teardrop against the heel of my hand.

The lillian and tip section are much beefier than on the other tanago rods, reflecting the 6X tippet rating. I should note that the rod is also rated for tippets as thin as 10X, so if you wanted to give the micros a fighting chance, you could. 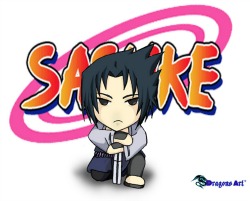 I'll say that the rod is quite firm and able to catch anything you'd fish for with a rod that small. It gets some decent flex with modest panfish. I wouldn't say it's a TON of fun for really little micros but for tight water with the possibility of catching something larger it's great. We've yet to see the rod's full capabilities. 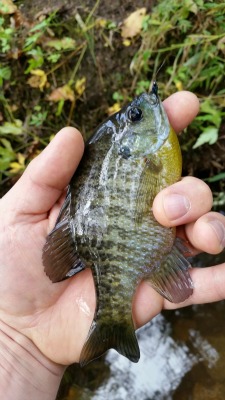 Ryan caught a fairly large bluegill today with her little Nissin. I think that little powerhouse could handle a fish twice that size.

Ryan does just love the rod, thanks again. 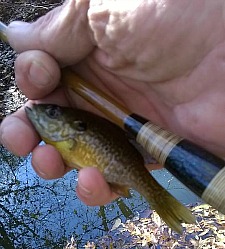