Last Sunday's outing was not an epic trip but not all fishing trips have to be epic. Sometimes, just getting out of the city on a hot summer's day is enough. I like the comment Jason Sparks makes about how, standing in the current, he can feel a whole week's worth of stress just wash away.

It's been quite a while since I've been trout fishing with Coach. The water's been low, the weather's been hot and it just hasn't happened. On Sunday, we went to two streams, the first a very well known stream that has nice fish but gets lots of pressure.

A few weeks ago I'd ordered a second Suntech Blue ZPRO 58 for a customer and decided to piggyback the order with one for myself. I'd fished the Blue ZPRO 63 a few times, both for smallmouth bass in Maine on my vacation and for trout after I'd gotten back. The 58 I'd just lawn cast when my customer's first rod had come in (he wanted me to compare it to the 63). I found it to be just enough lighter and just enough easier to cast (six meter rods have noticeable wind resistance from just the casting stroke) that I wanted one!

The first stream we went to is large enough to play with the long rods so I rigged up the Suntech Blue ZPRO 58 with the new Nissin size 2.5 fluorocarbon line and a size 20 black Killer Bugger.

Do you ever get to a spot that just looks so fishy you spend more time there than you should? That's what I did Sunday. There was this relatively small pool just below a riffle (which by itself should guarantee fish), with a very big rock on the far shore that the current flowed right to so it was almost certainly undercut (which should double down on the guarantee), and the pool was the deepest water for 100 yards in either direction. With low water in midsummer, that should be a trifecta! 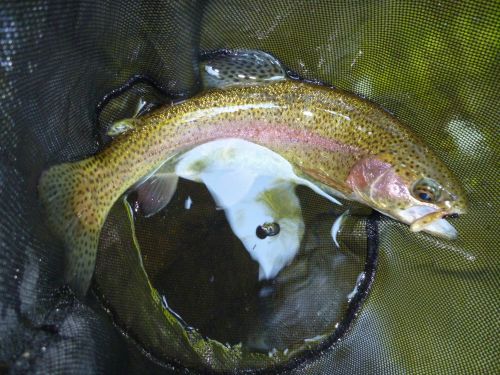 After too long a time, Coach and I moved to a different spot. The water there was wider, and slower, and to get a bit more reach I switched to the Blue ZPRO 63. I do like the 58, but for me, wanting more distance overshadows wanting a lighter rod. With the 58 you get great drifts, but with the 63 you get great drifts further away. When the water is low and clear, further away is a good thing. 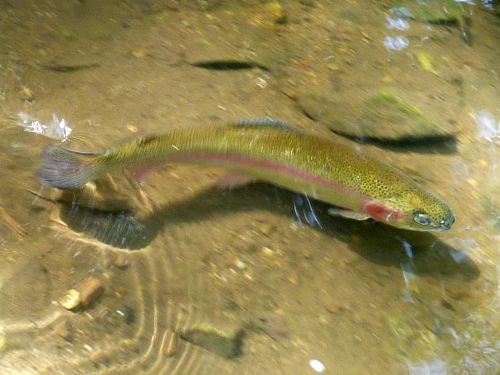 There, too, I caught just one fish but it was a nicer fish. At just a fraction under 16" it was the largest trout I've caught this year.

By then, though, the sun was on the water and the water was just getting to the temperature where we should no longer fish so we packed it in and headed to a smaller stream that always runs a bit colder. 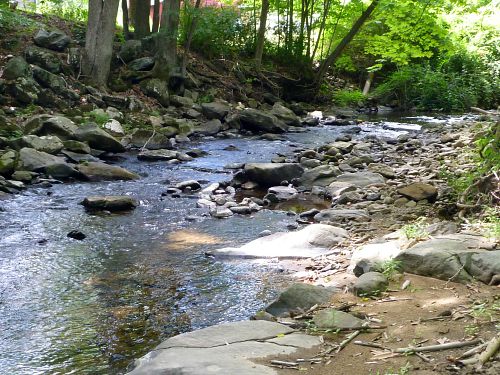 It was colder, alright, but it was lower too, much lower.

Many of the normal holding spots yielded no fish. Some were so low we didn't even fish them. Before long we both ended up at the largest, deepest pool on this stretch of the stream. Luckily, even at low water it is still wide and long enough for both of us to fish the same pool from opposite banks.

For this stream I chose a Nissin Air Stage Hakubai 390 (which I still think feels a lot like an Oni I when casting, although I seem to be the only one who feels that). The Nissin Air Stage Hakubai are seiryu rods that get a lot less press than the Suntech Kurenai HM series, but are very nice rods in their own right. They're more mid flex than the Kurenai and the penny ratings are a bit higher, but they fill the same niche (fishing for Oikawa in Japan and modest trout here). 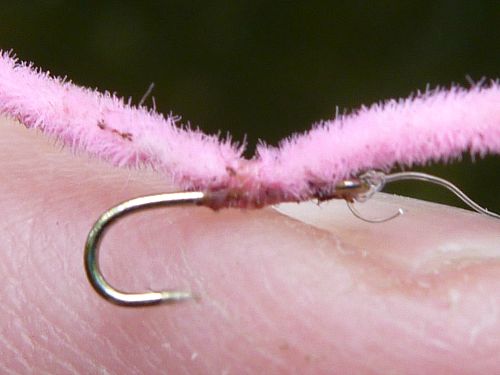 The "flies" for this stream were pink chenille worms, tied on the train on the way out using clamps and nippers. About half way out, after tying more than a few worms, I realized I have been making them unnecessarily elaborate.

Now you may think that it would be hard to simplify a fly that consists of just three things (two of which are hook and thread). I did, though. I eliminated the thread base, which makes the hook shank pink like the worm (the fish don't care). I eliminated the thread build up at the tie in point that kind of looks like that band that some worms have about 1/4 to 1/3 of the way down the worm (the fish don't care).

The photo above is not one of my last flies, but I ended up with just enough thread wraps to trap the thread, maybe four wraps about midshank. Then two wraps to hold the chenille on the hook. Then a four-wrap whip finish. Done. Ten wraps of thread for the complete fly. I'll lose it in a tree before it comes undone - and with that little invested in a fly, I don't mind throwing it into risky spots.

If you have not entered the TenkaraBum No Vise Challenge, and haven't even tried tying a few flies without your vise, I would urge you to try it. It has given me a whole new outlook on fly tying - and what it takes to fool that pea brain in a fish. Hints: it doesn't take much and neatness doesn't count. 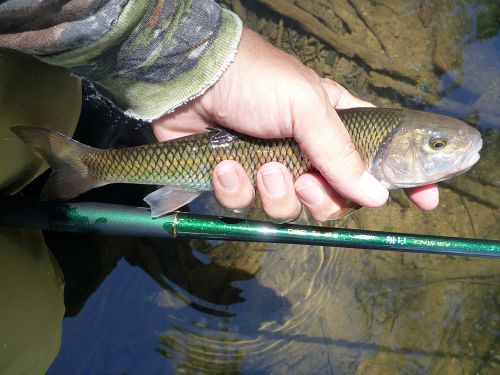 My first fish from the pool was a nice fallfish. I know a lot of fly fishermen would not consider any fallfish to be a nice fish. If they don't get pleasure from catching a fallfish, well that's its own punishment.

The pool yielded two more fish for me, both trout, with the larger of the two shown upper right.

Jason was right. The week's stress had washed away, and the fish slime applied directly to the palm had lowered my blood pressure. It was a good day.

Fly Tying With Clamps and Nippers 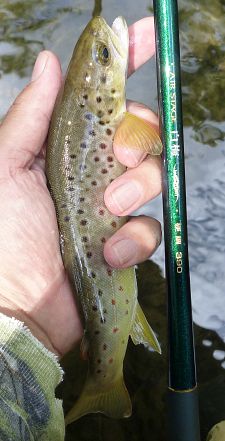