The Nissin Air Stage Hakubai are wonderfully light, extremely sensitive rods very well suited for tenkara fishing in smaller streams for smaller fish. They are actually seiryu rods. Seiryu is generally translated as "clear stream" and these rods are about as nice as you'll find for fishing the crystal clear headwaters in the Catskills, the Smokies, the Rockies or the Sierras.

For years now, US anglers have known that light, sensitive rods like the Suntech Kurenai HM30R are just ideal for modest trout in smaller streams. The only problem with the Kurenai rods is that there are lots and lots of streams that have trout but are too small, brushy and overgrown to fish with the 9'8" Kurenai HM30R. 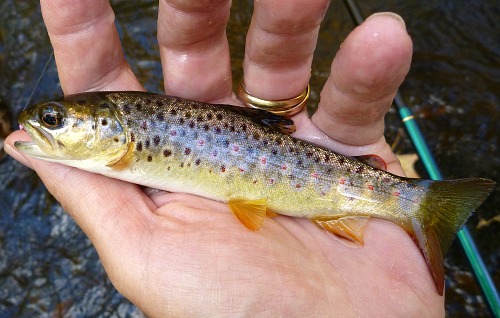 For most anglers, the 8' Nissin Air Stage Hakubai 240  is about as short a rod as they can use without spooking the fish they are trying to catch. The first thing you'll notice when you pick it up is that it is almost unbelievably light. The rod weighs just .6 ounce!

The Vermont PBS station had a nice program on tenkara not long ago. Although the host kept referring to the rod used in the show as a tenkara rod, it was actually a Nissin Air Stage Hakubai 240. The fishing was pure tenkara but the rod is a seiryu rod. Nonetheless, if you are fishing for little wild brookies, it would be hard to find a better rod.

Although these are wonderful headwaters rods, they're really not backpacking rods. The collapsed length on all of them is a relatively long 23 5/8". (Of course, generations of fly fishermen backpacked with three piece fly rods, which when broken down are quite a bit longer than that!). The longer sections mean fewer joints, and fewer joints make a smoother casting rod. 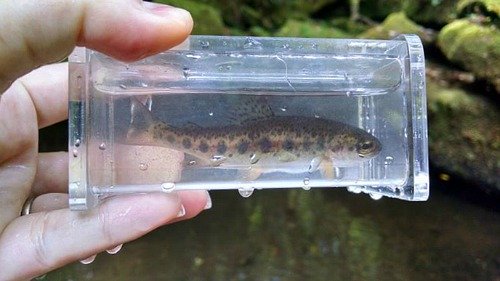 For smaller trout in small streams, it is hard to beat the Air Stage Hakubai medium. The medium is a 5 penny rod, which is the softest I have ever measured. It does not take a large fish to put a bend in the rod! 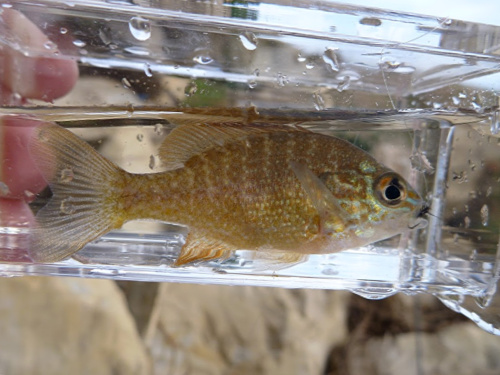 A sunfish this size will put a bend in the Hakubai medium! 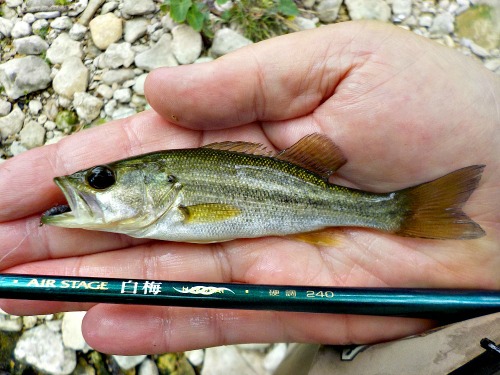 It seems like little fish are the new big thing. A recent NPR segment on micro fishing has generated a lot of interest. Perhaps the best thing about it is that it is so accessible. You don't have to travel far to go micro fishing. Many town parks have a lake or stream, and they all have fish. Most won't be wall hangers, but if you fish with equipment that is actually designed for catching small fish, it can be a lot of fun. 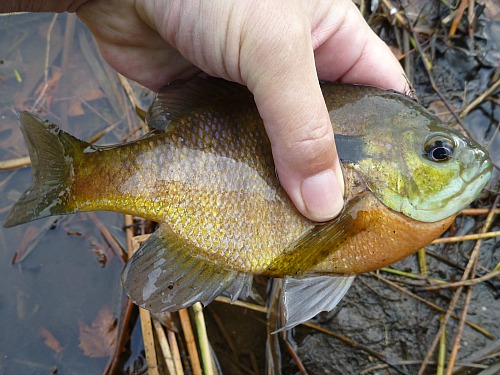 Sunfish are the just the start of an increasingly challenging pursuit.
Gotta catch 'em all!

Micro fishing can also get very interesting and challenging if you take it to the next level - seeking out and fishing for species in your area that you have not yet caught. It starts with sunfish and gets progressively more challenging.

That said, I know there are well respected people in the micro fishing community who will argue that not one of the fish pictured on this page, save the blacknose dace below, is really a micro. To be honest, I don't care. I am much more interested in providing equipment (and encouragement) that will make fishing for small fish fun.

If "Oh boy! I got it!" turns into "Oh crap, I already got this one!" or "Oh crap, its a bluegill sunfish (not micro) not a blue spotted sunfish (micro) that's not fun in my book and that's not why I offer the gear I do. If you enjoy the fishing, and the catching, and learning what you have caught doesn't disappoint you, then you and I are on the same page.

Blacknose Dace on the fly!

The rods are soft enough to cast a line that will twitch when a micro takes your fly. I would use size line no heavier than the Nissin Oni line size 2.5, and the YGK size 2 or 1.5 would be more sensitive for strike detection. The tippet rating for the Air Stage Hakubai 硬中硬 is 9X to 7X. I absolutely would not exceed 7X! For that matter, if you are fishing for small fish, there's really no reason to fish with tippet stronger than 8X. Pushing it to 7X only increases the risk to the rod if you hook a much larger fish, or if a much larger fish eats the micro you have hooked before you land it.

In addition to being light and responsive, the Nissin Air Stage Seiryu rods are really pretty. The finish is a clear coat over blue speckles and is unlike any other rod I've seen. In the sunlight, the rod changes from blue to green depending on the angle of the sun.

The color is carried into the grip section, which, as on all the other seiryu rods I've seen, is just a widened section of the rod blank, to which has been applied a very effective nonskid finish. The lack of cork between you and the blank gives you tremendous feel for what the fly is doing (and what the fish is doing).

I truly do not understand why some of the Japanese anglers, who do use seiryu rods like the Nissin Air Stage for tenkara fishing, cover the wonderfully sensitive grip with the rubber wrapping used on tennis racquets. You need it in tennis to cushion the shock from hitting line drive serves. In tenkara? I don't think so.

The tip plug is plastic and has minute ridges machined into the part that goes into the rod tip. It is a very snug fit - much more so than on the perhaps more common wood / rubber plugs. It is definitely not going to slip out by itself. However, they are small and easy to misplace. Do not lose the tip plug! Replacements are available, but they are expensive.

The grip screw is also plastic and seats securely in an aluminum insert in the end of the grip. The knurling on the screw cap allows you to tighten it securely or remove it easily.

Like a set of fine china, replacement pieces are available but there is no warranty. Handle with care and you'll be able to pass it on to your grandkids.

The Nissin Air Stage rods are made in Japan.

*Hakubai rods are used in Japan to catch fish that don't get much bigger than about 6". Japanese anglers do not break rods on 6" fish, so I am convinced that tippet ratings are no more than a rough guide, explaining what anglers generally use with the rod. I do not believe they are meant to state the strength of tippet that will break before the rod does.

Regrettably, TenkaraBum.com no longer exports to the UK. The sales volume does not justify the time and expense required to collect and remit the Value Added Tax.

The US Postal Service (USPS) has suspended all service to Australia. UPS will ship to Australia but the charge is roughly twice as much as that shown at checkout, which is based on the USPS charges. I will send an invoice for the additional shipping charge.

I took the rod out today on a small stream in eastern WV with mostly brookie natives.  The rod handled remarkably well for such a short length and is substantially fuller working than the Kiyotaki.

I am amazed at how close I can get to the fish in the faster sections of the stream.  I had numerous strikes and did manage to land about a dozen in 2.5 hours of fishing .

It does take a while to get used to such a short rod but it allows me to place some real tight casts.

I think this rod will be very nice when things get really overgrown.  The rod is so light and small one hardly knows you're holding anything and I can still get 6-36 inch drifts with it easily.

You were correct, this is one sweet rod. After hours of use all I can say is you can't make a bad cast with this rod.

I love the rod! It's the best rod I have ever fished! 8" Rainbow is a blast to hook and land (What a fight). 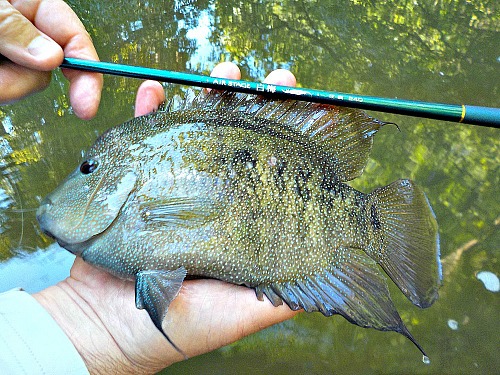 I think that seiryu fishing in the neighborhood creek may be one of the last "frontiers" in angling. One time I was fishing a little neighborhood creek that almost no one else fishes. A hiker came by and said, "You catch fish there? RIGHT THERE IN THAT LITTLE DAB OF WATER?" He couldn't believe someone could be so desperate, gullible, and naive as to fish that little creek that wasn't six feet wide. About that time, my Nissin Air Stage 240 almost bent double with a cichlid. I smiled, and he just looked

The Nissin Air Stage Hakubai remains the best small stream rod I have ever fished. Thanks for turning me onto it.  It’s been perfect for the mountains west of Boulder.

I just received the rod. Thank you very much and it’s a work of art! Thank you!

Just returned from casting it in the park with a #2 YGK line.

I was hoping it’d be the perfect Seiryu little brother to my Zerosum 320 6:4.

Hi Chris, what an amazing rod! I hit my favourite tiny creek which is loaded with Chubs and caught 56 of them on one of my size 18 flies.

The rod is really fun to play the little chubs, and then I hooked into a Rock Bass and had an epic battle getting it in on 7x tippet! The rod handled it bravely with the stouter sections coming into play while the softer sections absorbed every head shake, which was telegraphed to my hand!

I am super happy with this featherweight rod!

The Hakubai was amazing. Smooth, light, poised. The sunnies were a pure pleasure to catch on it as well as baby bass. All were caught on size 16 kebari.

It is the most fun I’ve had with tiny fish since I was a boy. In fact, it made me feel like a kid again. Thank you for your website and all of the info there as well as your reviews.