The goal for the day was to compare several 12' hollow-tipped rods. I have written more than once that I like hollow-tipped rods. My first experience with a hollow-tipped tenkara rod was in 2011. I had borrowed a Shimano LLS 36 NX, which had a hollow tip, and was a bit surprised at how easy it was to make nice, tight loop casts with it. That day I also had a Tenkara USA Iwana with me, which was the most popular solid tipped rod in the US at the time. Both rods could produce tight loop casts, but with the Shimano it was almost automatic. With the Iwana it took careful concentration.

On my first trip to Japan, I bought a Shimano LLS 36 NB, which was similar to the LLS 36 NX but had a slightly higher glass percentage, was a little heavier and a little less expensive. I eventually sold the rod. I don't remember why I sold it, and now I kind of wish I hadn't. The LLS 36 NX was discontinued years ago but the LLS 36 NB is still in production. It has crossed my mind more than once to buy another. It is Shimano's "starter rod." It is the only starter rod with a hollow tip!

The rods I fished on Sunday were at the opposite end of the scale - premium rods by any measure. The rods I had with me were the Shimano Maystone 36 NW, the Daiwa Expert Tenkara L LL36 and the Daiwa Master Tenkara L LL36.

I expected the Master to blow the others away. It didn't quite work out that way.

I fished a nearby tailwater, the only convenient water that was cold enough to fish in the August heat and large enough to fish longer lines with the 12' rods. To keep things consistent, I made up one line, which measured 19' from rod tip to fly. I've experimented with longer lines ever since I fished with Adam K in Colorado last fall. 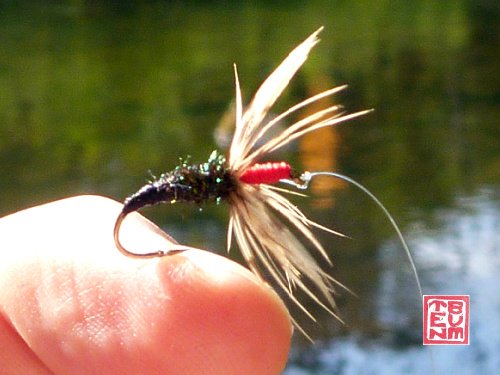 I started the day with a Tenryu Kebari but later switched to an unnamed Japanese Kebari that looked a bit like a thin-bodied Utah Killer Bug with a sakasa-style hackle and a bright pink head. I should have taken a picture of it but I didn't.

The first rod of the day was the Daiwa Master Tenkara L LL36. It cast the 19' line like a, well, like a master. Perfect turnover. I actually had to scale back the force I put into the cast to keep from having too much energy remaining in the line, which would slap the fly down with a splat. 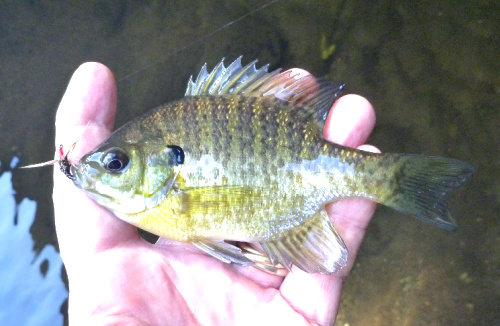 The first fish of the day was a bluegill. The stream flows into a reservoir, and although the water in August is cold enough for trout, it is not too cold for bluegills. 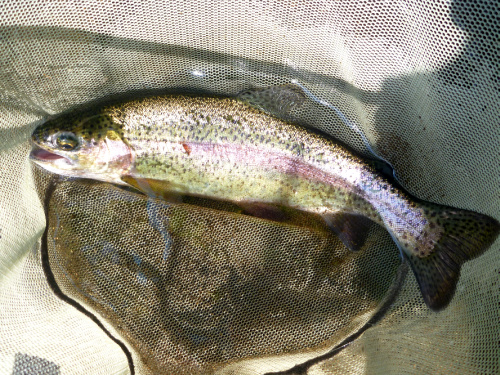 The day was not a "many" day, but I did manage to catch a couple trout. The first was a nondescript 10" stocked rainbow.

After catching the rainbow I switched to the second rod of the day: a Daiwa Expert Tenkara L LL36. It's collapsed length is 28 1/4", a bit longer than a standard tenkara rod but quite a bit shorter than the Master Tenkara L LL36, which collapses to 39 3/4". Although the longer collapsed length does make the rods a bit less convenient than most tenkara rods, the longer sections do give you a very smooth bend profile and casting stroke.

The biggest difference I noticed between casting the Expert compared to the Master was that the Expert was a bit softer. With a softer rod you need a softer casting stroke or you will overpower the cast. When that happens, the rod tip bends too far (too low) when you stop your forward cast, resulting in a loop with a big dip in it. That makes it harder to get the fly to land first.

The solution is really pretty simple, though. Just scale back on the force a bit more and make absolutely sure to stop the forward cast with the rod still high. After a little time making adjustments, I got to the point where the casts were just as beautiful as with the Master Tenkara L LL 36. Understand that the adjustments only have to be made once. If you own the rod, you pretty quickly learn how to cast it and from then on you're golden.

I finished that stretch of stream without catching another fish, but I had previously decided that when I moved to the next stretch I would switch to the next rod. The third rod of the day was the Shimano Maystone 36 NW. 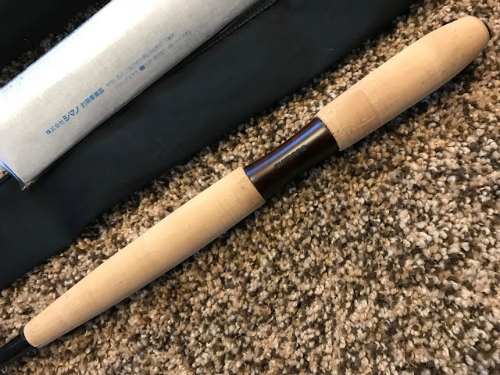 It is hard to describe what it felt like - at least it's hard to describe without sounding like an absolute fool. First a little physics. Disclaimer - I haven't studied physics since high school, and for me high school was a long, long time ago. A rod is basically a spring. When you start your forward cast the combined inertia of the rod itself and the line forces the rod to bend. When you stop the forward cast, the rod returns to its original shape (which is pretty much the definition of a spring). Because of the rod's momentum, the rod tip actually overshoots.

So here's where I sound like a fool. In casting the Maystone 36 NW, when you stop the forward motion, the rod really does feel like a spring. You can feel the energy as the rod whips back to straight. It actually felt like the rod had more energy than I put into the cast. It didn't, but that's how it felt. It was a strange feeling, but the casting was amazing. I'm a little surprised that I didn't notice it the first time I fished with a Maystone 36 NW, but I would guess the difference was the line weight. I am certain that the first time I fished the Maystone I used a line that was both shorter and lighter, which could not have loaded the rod as much as the longer, heavier line did on Sunday. 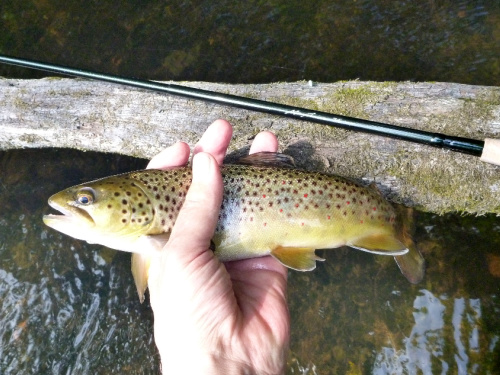 Last trout of the day.

I caught only one fish with the Maystone 36 NW, but the high point was the casting, not the catching.

Comparing the three rods, the Daiwa Master L LL36 felt like it had the most power. It felt like it could handle a much longer line, or a much heavier line if I'd had to fight a 40 MPH wind like we did one year at the Oni School in Utah. I am sure the Master would have had absolutely no problem with the size 4.5 line I borrowed from Oni himself. I like the Master - a lot!

The Daiwa Expert L LL36 was the softest rod. It would be the one to fish if you prefer a lighter line and a more delicate presentation. It handled the line I cast on Sunday without issue, once I adjusted my casting stroke from what I had used with the more powerful Master.

The Shimano Maystone 36 NW just felt amazing. I like the way it cast better than the two Daiwas, but I admit that I prefer the more standard Daiwa grip over the Shimano grip with the wooden insert.

The day held two huge surprises for me. The first was that after fishing with the three premium hollow-tipped rods, I pulled out my TenkaraBum 36. I was shocked that the casting was just as smooth, just as accurate. I had truly expected that the Daiwas and Shimano would be head and shoulders better - but they weren't. I have said it before and I will say it again, the professionals at Suntech created a much better rod than I could have hoped for.

The second surprise was that using a hand-tied tapered leader between my level size 3.5 line and my 5X tippet gave me the best, most consistent turnover I have ever achieved with a tenkara rod. Fly-first casts were easy. Keeping the hi-vis tenkara line off the surface at all times was easy. I doubt I will ever again fish tenkara without a hand tied tapered leader. Read more about it here: Tenkara Tapered Leader.