An abriged version of this trip report was first published in the Summer issue of Tenkara Angler.

I suppose regular readers of TenkaraBum.com know that I don't always play according to Hoyle. Getting in carp rods is an excellent example. I do think that fixed line fly fishing for carp will be a big thing, but I also got them in for steelhead and stripers.

Several years ago, not long after tenkara started to become popular in the US, people started linking forum and Facebook comments to a Shimano video featuring a Japanese angler catching steelhead in Canada. It wasn't tenkara but to anyone other than the purists, it didn't matter. It looked like a real kick! The guy was using a rod designed for catching salmon, and it looked like it took every ounce of his strength to keep from being pulled in by the fish.

Over the years, I have had lots of inquiries from people who wanted a rod to catch steelhead. To date, none of them have wanted to pony up the $600-700 required for a rod like Daiwa's Salmon Hunter that is actually designed to catch salmon or steelhead. The new Shimano salmon rod is even more expensive - much more.


I thought then (and still think now) that a carp rod might be sufficient for the average 4-7 lb steelhead generally caught in the Great Lakes tributaries.  I haven't yet had a chance to try it for myself, though.

The other fish that I thought would be reasonable game for the carp rods were schoolie stripers.  Granted, striper fishing is even more of a regional thing than steelhead fishing, but where it is done there are fanatics.


George Roberts, friend, fellow tenkara angler and fly casting instructor, knowing my interest in catching a striper on a fixed line rod, organized a striper weekend for me. We were joined by Brad Clark, and from the way Brad and George heckle each other, you can tell that they fish together often. The plan was to fish the Bass River on Cape Cod and both the South River and Cohasset Harbor on the South Shore (the shore south of Boston). 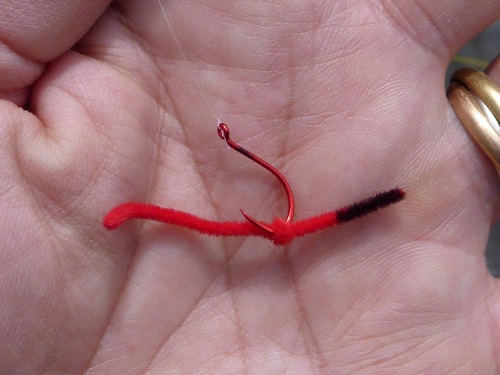 In addition to having the chance to catch a striper with a fixed line rod, this would be my first chance to "match the hatch" with an Overhand Worm! I guess technically it is called a worm swarm rather than a worm hatch, but there are aquatic worms that have a mating swarm on late spring evenings.  They are red with black heads and although they are bigger around than my pink chenille Overhand Worm, I thought a red chenille Overhand Worm with a black Sharpie-colored head just might work.

Well, as it turned out, the worm swarm that had occurred when George had taken a scouting trip to Bass River the week before did not happen the evening we fished there. I did try the red Overhand Worm but got no takers.

What did work were some Tabory snake flies that George had tied. A Tabory snake fly has a stacked deer hair head and collar,  marabou body and ostrich herl tail with a few strands of flash. The flies George tied were over 5" long. The one shown above has a body of arctic fox as a substitute for marabou.

Although a 5" long fly is not what one would normally cast with a tenkara rod, with one of the carp rods and a  6m Nissin PALS SP Pro line it was really pretty easy.  The casting stroke with a 5.4 or 6.3m rod is long enough and the SP Pro line is just heavy enough that the big bulky fly turned over well. Truth be told, I think the deer hair head (especially when wet) makes the fly dense enough that you could probably cast it pretty easily with a size 4 fluorocarbon tenkara line. I didn't try it but I bet I could cast one with a TenkaraBum 36. 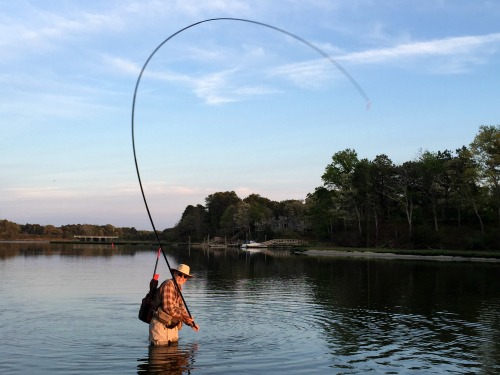 While the Bass River was not a blow-out, it wasn't a skunking, either. I would guess I caught five or six stripers, but they were all small.  They were big enough to put a bend in my Suntech Field Master Honryu 81 but not big enough to really answer the question of whether a carp rod was sufficient for schoolie stripers, which I would guess are roughly in the 16-20" inch range.

The following day we fished the South River and did get skunked. We didn't even get a swirl, let alone a take. After the South River, we went to a place I probably shouldn't name. George said it wasn't a particularly interesting place to fish but it is one where he has never been skunked (for fear of jinxing it - or perhaps thinking that I would feel too much pressure, he didn't tell me until afterwards that his perfect record was riding on me catching a decent fish). 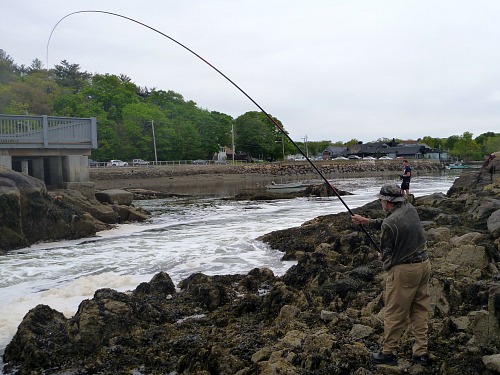 I fairly quickly missed two light hits. Finally getting the fly in just the right spot, I got a solid take and was into a fish that was nothing at all like the fish we caught in the Bass River the previous evening. George had warned me to use the rod rated for the strongest possible tippet. That was the Nissin Red Dragon, with a 2X tippet rating.  I had planned to bring a Nissin Kyogi, which has a rating of 0X but the last one I had got sold just two days before the trip!

The fish tried to turn downstream but I was able to prevent it from making the turn. Between the fish and the current, the Red Dragon 620 had a deep bend but never felt like it was at its limit.

I could feel the line scraping on the rocks and was afraid of losing the fish. After a few minutes, though, it started to tire and I was able to slide it into some shallow water and then lip it. I wish now I had taken the time to measure it. George guessed it was about 24 inches. Comparing the length of the fish to a known length on the rod it was actually just over 25 inches. 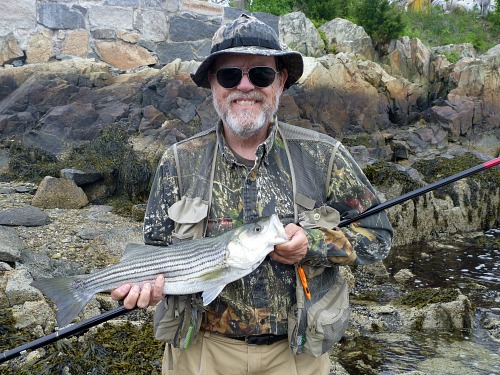 We did fish one other spot, but that one fish had already made the trip and by then it was getting on towards dinner time (or at least cocktail hour).


The next morning, the plan was to get up at 4 AM to fish Cohasset harbor at low tide. When we got there, another guy was just suiting up. He got there first, and I was concerned that he would have the best spot. I needn't have worried. Before too long, stripers were busting the surface all around us. We had waded out no more than about knee deep, and not only were they within easy reach of the Nissin 2-Way 620ZX, at times I was casting parallel to the shore and hooking up. Before we left, Brad caught a striper while standing on shore. 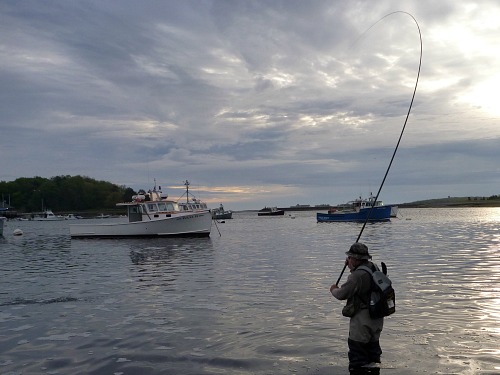 I lost count of the stripers I caught, and before long didn't even think of the numbers. I was much more concerned with the number of fish I was missing. I think at times I was too fast with my hook set and pulled the snake fly right out of their mouths, and at times was too slow and they spit it out before I reacted. They were persistent, though! An immediate cast back to the swirl or splash of a missed hook set was usually met with another take. I have no way of knowing if it was the same fish, but it didn't matter.

After enough fish to make it well more than a many day, I decided to see if one of the flies I had tied back in my Blue Fly contest would work.  It was a royal blue and white deceiver, and was much more sparse than George's snake fly. It worked, probably almost as well as the snake fly. I think, though, that there were so many fish and they were so intent on eating that just about any streamer pattern would have worked. 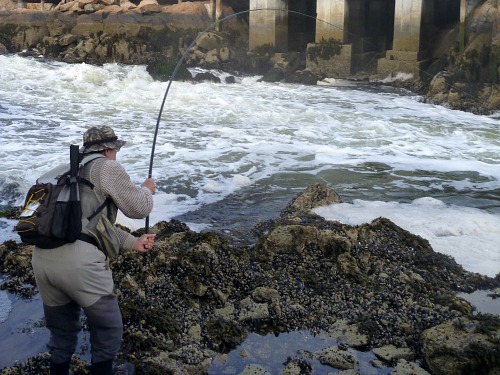 We then went back to the spot where I had caught the nice striper the previous evening. Using a Flying Dragon 530 this time and the same PALS SP Pro line (which I had not checked for abrasion after feeling it scraping on the rocks the night before), I quickly got an aggressive take. This fish felt bigger than the one from the previous evening. It also tried to head downstream but this time I couldn't keep it from making the turn. 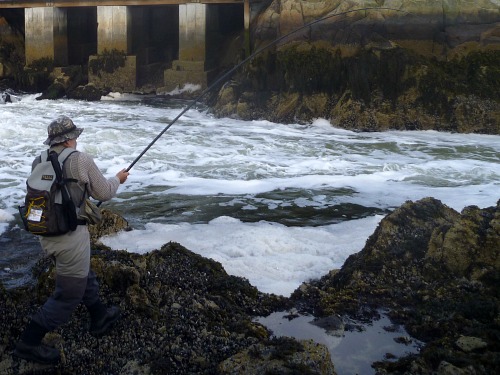 You can tell from the photo that the rod is already too low. With the slippery seaweed covering the rocks, I couldn't follow nearly quickly enough. Whether the line got cut on a rock or was just weakened by abrasion from the large fish the previous evening, after a short fight the fish was just gone.

George said that hooking a large fish in the rocks, and having to fight the current as well, and then having it break the line (not the tippet, the line itself!) did not count as a skunking. I have to agree. After a skunking you are not pumping adrenaline!

It was a weekend of firsts for me. First striper on a fly, first striper on a fixed line rod, first many day with stripers, first time I ever made an 80+ foot cast with a western fly rod - heck, first time I picked one up in nearly 9 years (like I said, George is a casting instructor, although actually it was Brad who pointed out my initial fault), and last but certainly not least, the first time I saw a snake fly.

I am definitely intrigued by the snake flies, and I am excited by the prospect of using them for smallmouth bass on my upcoming Maine vacation. I've done very well with the Keeper Kabari there, but I can just see the smallies slamming that snake fly, which with the long rod you can swim back just under the surface, slide or pop it on the surface, or even bounce out of the water in short hops. The ostrich herl tails are so mobile that they undulate with the slightest twitch of the rod tip (and in moving water with the slightest current). I just know they're going to be absolutely irresistible.


Before this past weekend, I have fished streamers and bucktails only a few times with tenkara gear. That's going to change. Having a many, many day with stripers on a fixed line rod is definitely an eye opener!