First, a bit of background information. The path that eventually led me to discovering tenkara started with a photo of a North Country wet fly. The simple, slim body and ultra sparse hackle that looked for all the world like the ribs of a super small umbrella were magical, and I am still under their spell.

Early in my tenkara journey, though, I fell into the "tenkara flies are sakasa kebari" trap, so nearly all my photos show flies with forward slanting hackle. I also fell into the Killer Bug trap because it is just so effective where I normally fish.

Henry David Thoreau, who famously spent two years in a small cabin he built on Walden Pond in Massachusetts, wrote "Many men go fishing all of their lives without knowing that it is not fish they are after." Christopher Thomas Knight, aka The North Pond Hermit, who spent 27 years living undetected in a crude camp he built near North Pond in Maine said Thoreau was a "dilletante." When I go fishing, I go to catch fish -- and Killer Bugs catch fish.

Combining the hackle of a North Country wet fly with the body of a Killer Bug produces a Killer Kebari. 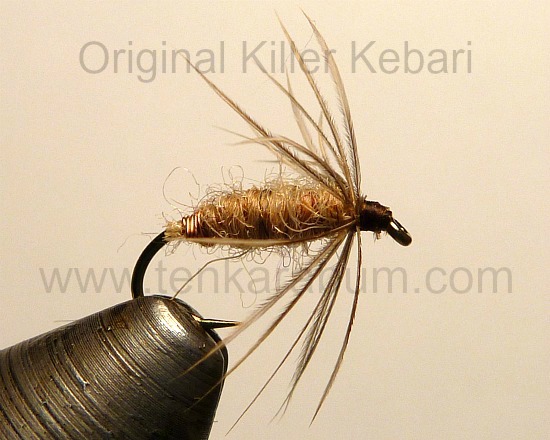 I now post only the photo that has the watermark because over the years I have seen photos of so many flies labelled Killer Kebari that look absolutely nothing like the original. It is a little disheartening.

Of course, a connoisseur of North Country wet flies would say my Killer Kebari looks nothing like a North Counry wet fly. Touché.

It does catch fish, though!

Enough with the background information! After experimenting the last couple trips with using ultra-light lines to fish micro nymphs, the purpose of this trip was to see if a North Country wet fly, which offers virtually no resistance to being pulled through the water by line sag, could be fished effectively with a size 1.5 or size 2 line.

My experiment faced two significant hurdles: 1) It was late November and I never do well fishing in the winter, and 2) It was a very nice day for late November and the stream (which is the only even reasonably good trout stream in southern New York that is open for fishing in late November) was packed. I saw three other anglers fish the one stretch in which I usually do best before I had a chance at it. In other words, I got skunked.

I did hook one fish (in my fourth favorite spot). In savoring the fight, I did not land the fish at the earliest possible moment. The fish then got under a log, where it was able to dislodge the hook.

On other trips and in other locales I have caught fish while tenkara fishing using extremely sparse flies - and with lines heavier than 1.5 and 2. Thus, I know it can be done. Two flies in particular stand out. 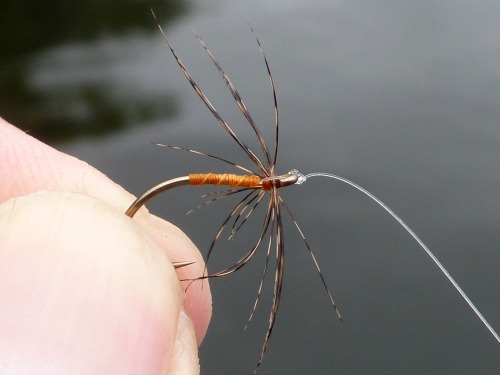 Partridge and Orange, tied in hand.

One was a fly I tied on my Maine vacation when I was running the No Vise challenge for tying flies in hand. It wasn't beautiful, but it was very sparse and it did catch fish. On the other hand, it was fished in still water and I always pull my flies when fishing still water. Thus, line sag was irrelevant. 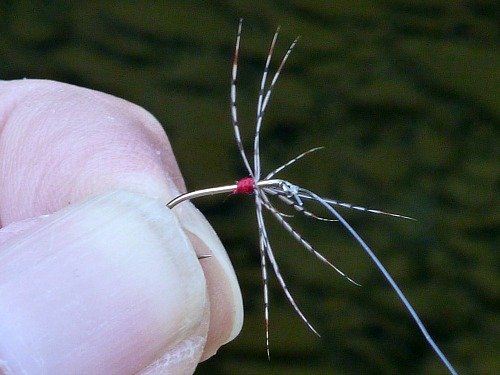 The other was a fly tied when I was playing around with how little I could tie on a hook and still catch fish. I was able to catch fish with that fly, so the answer is "very little."

I did not keep notes, but I would bet that both of those flies were fished with a size 3 line when I caught fish with them. I think the red one, which was fished in a stream, would have been a bit more effective if fished with a size 1.5 or 2 line.

On this trip, after cycling through a number of flies that could reasonably be called "in the North Country style" with nary a tap, I tied on a fly that was another of the "how little can I tie on a hook" flies. 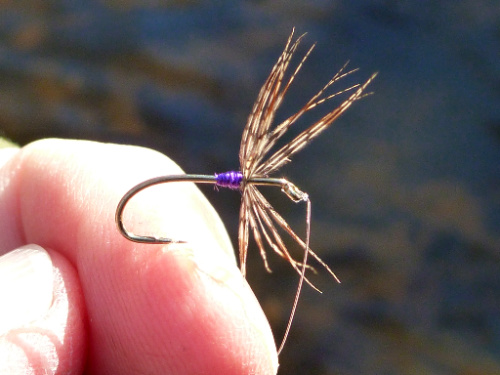 They say purple is a good color in winter.

It's not quite as sparse as the red one above, but it is the fly with which I hooked the fish on this trip. Fished with a size 2 line on a very soft rod (Nissin Pro Square Level Line 390), it cast well and must not have had too much drag caused by line sag.

I am still drawn to North Country wets. I have not fished them much with tenkara rods, as I had gotten side-tracked with sakasa kabari and Killer Bugs. I had also fallen into the trap of thinking they are not proper tenkara flies, somehow forgetting that they were originally developed when people fished long rods with horsehair lines tied to the rod tip. I suspect I will fish them more next year, very likely with a horsehair line tied to my rod tip.

I enjoyed your article about North Country flies. This last year I have been thoroughly obsessed with sparsely tied soft hackles. I didn’t experience the same “tenkara fly” contradiction and I’m glad I didn’t.

They have worked extremely well for me in smaller streams and I absolutely love tying them. There is something about the elegance and simplicity that I find completely mesmerizing....not to mention they are fast ties and fill up a box quickly.

I have had great success fishing with them in a typical upstream tenkara fashion, but when I finish with the dead drifts and manipulations, or when I just get sloppy and tired heading back downstream to the car, I like casting them quartering downstream in a simple wet fly swing, keeping a high rod tip to raise the hi vis line off the water and to allow a good rod bend after the strike.

It has turned out to be VERY effective and exciting for me. Perhaps I don’t always fish thoroughly enough on the way up, but I usually end up picking up numerous “bonus” fish. The takes are much more exciting to me, as well. Even a juvenile fish will leave me grinning ear to ear.