The Killer Kebari is the fly I tied for the first tenkara fly swap held in the US, which requested each participant's best tenkara fly. I had created the pattern in 2011 by adding a sparse soft hackle to Sawyer's Killer Bug. The hackle is taken from the neck of a hen pheasant. Unfortunately, many hen pheasant skins do not include the neck, so the proper feather can be pretty hard to find.

I have tied the fly with partridge, but the hackle isn't quite the same. I would suggest continuing to look for a hen pheasant skin that has the neck attached.

I have now seen photos and even "how to" videos that purport to show a Killer Kebari. Many are so far off that they should carry a different name. I do not believe in trademarking fly names, so I have no recourse other than to suggest that if you can't trust the website on that, perhaps you cannot trust them on other things as well. A Killer Kebari, first and foremost, is NOT a sakasa kebari!

Most American anglers, when they think of tenkara flies, probably think of the reverse hackled sakasa kebari. However, the excellent work that Yoshikazu Fujioka has done in cataloging the various tenkara patterns (Tenkara Fly Patterns), indicates that not all tenkara fly patterns used in Japan have reversed hackles.

One of the Hida Takayama flies is just a fairly thick wool body with a soft hackle of hen or hen pheasant.

There is a lot to be said for fishing a hackled fly - particularly when fishing a tenkara rod. One of the central themes of tenkara fishing is that the presentation is more important than the fly choice, and a hackled fly can give you just a little bit more flexibility with respect to presentation.

A scud or nymph imitation can be fished dead drift, pulsed to mimic the swimming action of a scud, or manipulated with a Leisenring lift or other induced take method to mimic a mayfly nymph or caddis pupa rising to the surface to hatch. With a bit of soft hackle, though, pulsing the fly causes the hackle to open and closes and give additional evidence of life. Also, a hackled fly kept on or near the surface can also mimic an emerger.

I once saw a slide presentation on soft hackles given by a relatively well known figure in fly fishing and fly tying circles. One of his slides was an illustration of what he called a common mistake - making the body too fat. It looked just like my Killer Kebari! I am sure he was thinking of the thin bodied, ultra sparse North Country spiders, but I didn't have the heart to tell him that his "mistake" catches fish like crazy! 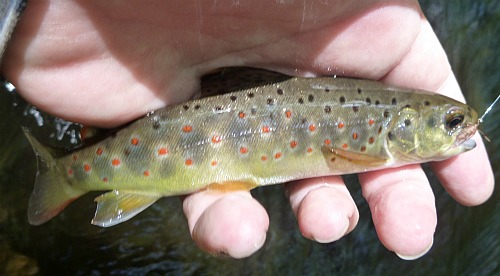 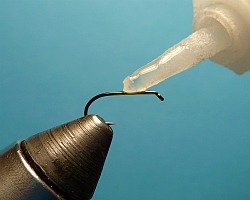 1. I generally use a Daiichi 1550, size 14 hook. Because copper wire wrapped around a bare hook shank will slip pretty easily, put a drop of super glue on the hook shank. I find a brush applicator works a little better but the more common tube applicator works, too. 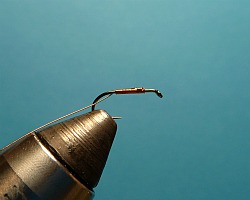 2. Start wrapping the wire a little further back from where you'll want the hackle to be - maybe a third of the way down the shank. Wrap in touching turns towards the bend, stopping opposite a point about halfway between the hook point and the barb. 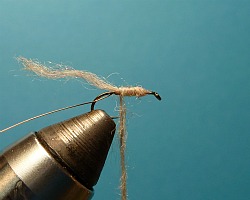 3. The yarn I use is Jamieson's Shetland Spindrift (the color is Sand #183), which is a two-ply yarn. This fly is a bit small to use both plies, so separate the two plies and just use one. I generally cut a couple feet at a time to separate. Start the yarn (just like you would tying thread) just behind where the hackle will go. After about 5 tight wraps, cut off the tag end. The photo shows just before it was cut. 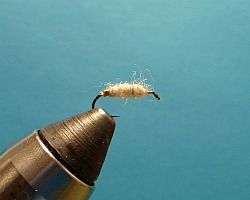 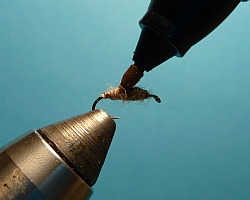 5. Color the yarn lightly with a Sand (#70) Prismacolor marker. At first, the yarn will look too dark, but the color sinks in and also fades a bit after your first cast. When wet, the fly will have nice pinkish tan hue. After you've colored the yarn, you can touch the copper wraps with head cement. Even though I never used to use "head" cement and I've never had either a killer bug or killer kebari come apart, it's probably not a bad idea. 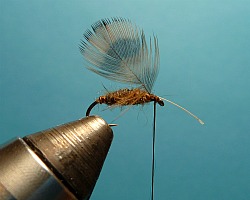 6. Tie in a small feather from a hen pheasant neck and make one wrap of hackle. For this fly, I prefer tying in the feather by the stem.


7. Tie off the hackle, trim, form a neat head and whip finish. I use a dark brown thread, which complements the body color nicely.

The same fly can be tied with a black or charcoal gray yarn, a starling feather and black thread. In black it makes a nice winter fly. 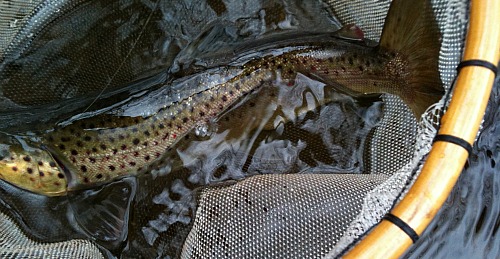 Thanks for the Killer Bugs but the real winner in Yosemite backcountry was the Killer Kebari you sent. They could not resist it! I will be getting more of those. Unfortunately I lost it in a tree but not before feeding it to quite a few fish. Thanks again!

Your Killer Kebari pattern was deadly on the North Carolina Nantahala yesterday. Water 40 degrees and after one day of bamboo rod and streamer with 2 fish, my Iwana and your pattern caught over 13 fish - in dead winter the next day. Just sent 2nd order!