The Little Dark Kebari is an adaptation of the Killer Kebari, which has proven to be both effective and popular. It is a bit smaller and darker, and may be taken by the trout to be a little black stone fly or little black caddis, or any one of the small, dark mayfly nymphs that make up a good percentage of a trout's diet.

It is tied in the Hida Takayama style, and is the same general type of tenkara fly as the Killer Kebari, with a thick yarn body and a soft hackle, although the LIttle Dark Kebari is tied with starling hackle rather than hen pheasant. The starling hackle is extremely mobile and will pulse with the slightest twitch of your line or smallest current variation.

The charcoal colored wool yarn body is a blend of light and dark fibers and looks much more lifelike than any uniformly colored body could. I tie the Little Dark Kebari with the Black Killer Bugger yarn.

Whatever the trout take it for, they do take it. 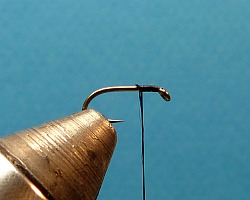 1. Start thread at hook eye and wrap back about 8 wraps with 6/0 thread. The photos show a Daiichi 1530 hook (1X short wet fly hook). You could also use a Daiichi 1550 hook, which is a standard shank wet fly hook. 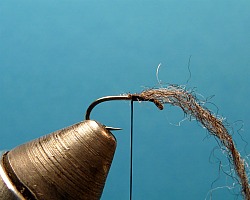 2. Separate the two plies of the yarn and tie one in with two tight thread wraps. Clip tag end. 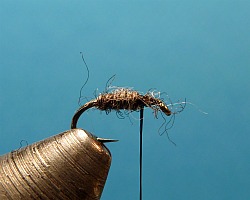 3. Wrap yarn in touching turns back to the bend, and then back to the tie in point. Tie off with two tight thread wraps and cut off tag end. 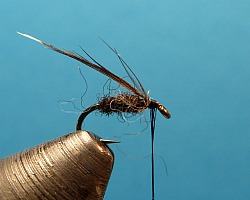 5. Make just one wrap with the starling feather, tie off with two thread wraps and clip excess. You should have room for a three or four wrap whip finish to make a small, neat head. 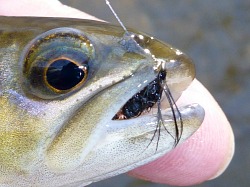 Of course, you could also follow the tying sequence for the Killer Kebari, using the copper wire underbody and substituting the Little Dark Kebari yarn for Killer Bug yarn, and starling hackle for partridge. The copper does give you a bit heavier fly, which should fish a bit deeper. The fish seem to like it just as well.