In my 10-18-20 trip report on fishing with the Nissin Pro Square 320 Level Line rod, I mentioned that I ordered the 360 and 390 versions. This past weekend I had a chance to fish with them.

The day was not a "many" day or even a particularly memorable day. That is actually one reason for writing this report. I find myself going back to read previous trip reports to refresh my memory of particular rods or methods. I tend to remember outstanding days, but days in which I catch a only a few fish tend to get forgotten.

Case in point: the day I first fished a Nissin Pro Square Level Line     320 was shortly after I had purchased three Pro Square 320 rods for evaluation, one Level Line, one 6:4 and one 7:3. I took the three rods to a tributary of the Beaverkill, hoping to find some of the brookies reported to be there. I got skunked and didn't write a report. I later learned that I hadn't hiked far enough in, and that the brookies were indeed in the stream but not where I was fishing. I remembered that the Level Line rod was more full flex than the 6:4, but that is all I remembered about it.

Much later, when I was thinking about rods specifically designed for level lines I wished I had written about that first day and why I chose to import the 6:4 and 7:3 but not the Level Line rod.

On Saturday, my goal was to fish the Nissin Pro Square Level Line 360 and 390 rods for the first time and also to fish some small bead head Killer Buggers as a follow-up to my Micro Nymphing article.

After posting the article, I had gotten a question about which rod is best at casting the lightest possible line. In my view, that would be the Nissin Air Stage Hakubai 240 medium, although it is a bit short for all but the smallest streams. The rod I had suggested in answer to the question was the Nissin Fine Mode Nagare 330 硬調, which is long enough for most small streams. The 硬調 action is what I normally call "stiff" but there is nothing stiff about the Nagare 330 硬調. It is a full flex 7.5 penny rod.

The Nissin Pro Square Level Line 320 is one of the softest tenkara rods I have ever measured, at just 10 pennies. I thought there was a reasonable chance that it would also do nicely with a very light level line.

As it turns out, even though I had the Pro Square Level Line 320 with me on Saturday, I didn't even fish it. I spent the day fishing the 360 and 390. I started out with the 390 in deep, slow pool. I had to accept that the bead heads on my micro nymphs (size 26 on point and a size 20 on a dropper) were not heavy enough to get down to where the fish were.

Before changing flies, though, I had cast enough to decide that the 390 does just fine with a size 2 YGK line. I did not try the 1.5. 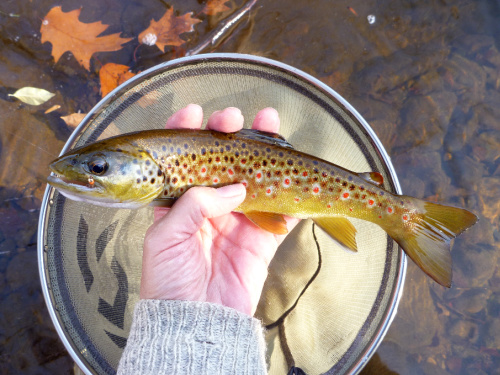 I switched to a size 16 that had a significantly larger bead, and was finally able to entice a trout to take it. The 390 Level Line rod is very soft and is not the rod I would choose for fishing heavy nymphs in deep water. For this particular fish, the take was not subtle. I was just starting to pick up for another cast when he hit, so the line was already perfectly tight. For small bead heads in shallow water the rod would do just fine.

After catching that fish I switched to the 360 and started working my way upstream. At least in this particular stream, most of the fish seem to migrate to the pools as the weather gets colder. In the long stretches between pools I was able to concentrate on my casting without being interrupted by pesky fish. (One of my nieces once complained that her casting practice kept getting interrupted by pesky fish).

Unfortunately, that's about when the breeze kicked up. Doubly unfortunate, it was blowing directly downstream. With low, clear water in a narrow Eastern stream, there's no point hiking upstream and fishing back down. The fish will see you before you can get a fly to them. As with most Eastern streams, there were trees and bushes right up to the banks. If you are not in the water, you can't cast.

As you can imagine, casting a size 1.5 line into a breeze with a soft rod proved to be impossible. With a stiff rod, you can generate more line speed, which helps overcome wind resistance. With a soft rod, though, if you try to put more power into the cast the rod tip extends too for forward and down when you stop the forward cast. That creates a huge loop that cannot cut through the breeze.

Whenever the breeze died down a bit, casting a size 2 line actually worked better than I had expected. It turned out that the weight of the fly, even a size 20 bead head, was sufficient to help achieve complete turnover. On a still day, I am pretty sure the Nissin Pro Square Level Line rods would have no problem casting a size 20 bead head nymph with a size 1.5 line. The 1.5 line is light enough to twitch when a 2.5 - 3 inch micro hits your fly. 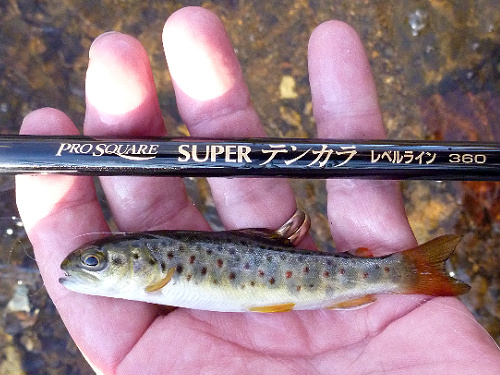 I didn't catch any micros on Saturday, but I did catch a couple pretty small trout. You can just barely see the bead from the size 20 bead head Killer Bugger in this one's mouth. The take was pretty subtle, but the size 2 line did show it. 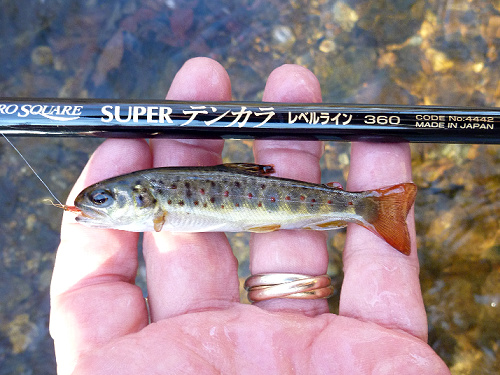 When the breeze died down (unfortunately, only for a while) I switched to a Hare & Hound kebari and managed to catch another small trout. The small trout were not in the pools (where the large trout probably would have eaten them). They were in isolated slightly deeper spots where there was plenty of cover.

The weight of the size 12 wet fly was very nearly the same as the size 20 bead head I had been fishing. It was enough for complete turnover and fly-first presentations. 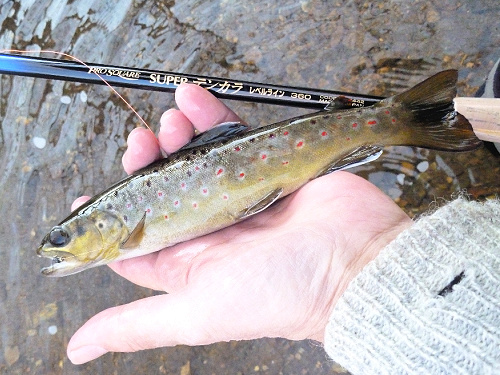 The last fish of the day came from the largest pool. The size 20 bead head Killer Bugger was not heavy enough to get to the bottom of the pool itself, but was effective at the very head of the pool where one of the two small streams that feed the pool dumped in.

Coming back to the idea of micro nymphing - nymph fishing for micros, either as an end in itself or to hone one's skills for Euro nymphing for trout - I think the Nissin Pro Square Level Line rods are perfectly suitable. All three of them will cast a YGK size 2 line nicely. I am pretty sure they could cast the YGK size 1.5 line on a still day.

The rod I have generally recommend for fishing with the lightest possible lines is the Nissin Fine Mode Nagare 330. I think the Pro Square Level Line 320 will give it a run for its money. I need to take them both out on a still day to compare them back to back.

When I fished the Pro Square 320 Level Line rod for my 10-18-20 trip report, I spent most of the day fishing with a size 3 line. I also tried a size 2.5 but felt the 3 loaded the rod better. Perhaps I should rephrase that to read "loaded the rod more deeply." The rod casts a size 2.5 line just fine. I am now kicking myself for not having fished the 320 on Saturday. I just got carried away with the 360 and trying to cast the size 2 line into a breeze.

Given that the 360 cast the size 2 line nicely (when the breeze died down) I am sure the 320 would also. I suspect both would cast the size 1.5 on a still day.

If you wanted a small stream trout rod that would also do well for micros, and if you really wanted a rod with a grip rather than a seiryu rod, the Pro Square 320 Level Line would be an excellent choice. I've almost talked myself into importing it for the shop.