At first glance, the Fujino Tenkara Line appears to be essentially the same as the Fujino Midi and Soft Tenkara lines. I think the Tenkara Line is made from a harder nylon, though. Back in the old days, not as far back as gut leaders but before knotless leaders became popular, fishermen tied their own leaders using different diameters of nylon leader material to create the taper. The butt and mid sections were tied with a hard nylon and the tippet section was tied with soft nylon.

The theory was that the hard nylon would turn over more easily and would be better at transferring the energy of the cast to the light tippet and fly. These days, most people do not tie their own leaders, but the same principle still does apply. The laws of physics haven't changed and a line that doesn't bend as easily (hard nylon) does transfer the energy of the cast better than a limp line. 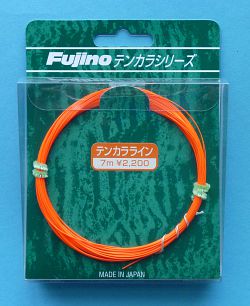 The Fujino Tenkara Line is really quite easy to cast for a nylon line. I have often pointed to nylon's lack of density relative to fluorocarbon, which does make it harder to cast, particularly into any breeze at all. The Fujino line, though, does seem to be considerably easier to cast than any nylon level line I have tried, and is also easier than the MIDI and Soft Tenkara Lines. That is evidenced by the fact that the Tenkara Line is available in a 7m length while the Midi and Soft lines only come in lengths to 4.5 and 5m, respectively.  I think the hard nylon really makes a difference.

One downside of the hard nylon, though, is that it was much harder to stretch out the coil memory, particularly on a cold day. Those two characteristics, beautiful turnover but persistent memory describe the Fujino Tenkara Line pretty accurately.

Aside from the coil memory, which a good stretching minimizes, the only thing I don't like about the Fujino Tenkara Line is the long tag end where the loop for the girth hitch is attached. I would cut it short and apply a drop of superglue, which will hold the girth hitch loop but eliminate the tendency for the long tag end to get caught on everything.

One side note that may interest those who film their fishing adventures is that the Fujino Tenkara lines are much more visible to the camera than ordinary tenkara lines. One of the biggest complaints I have always had with respect to tenkara videos has been that you couldn't see the line. Seeing the line in tenkara is critical. The Soft Tenkara and Midi lines are visible on camera. I am sure the bright orange Tenkara Line would be even more visible. 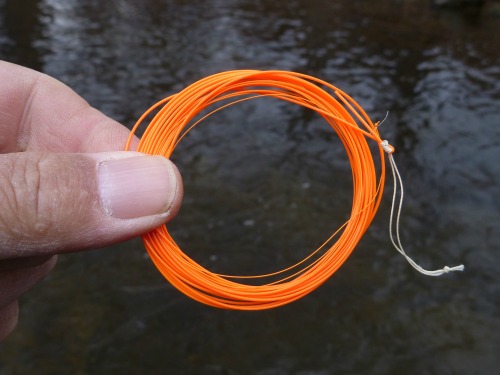 The line is extremely visible and would be an excellent choice for people who fish into the twilight, when even the hi-vis fluorocarbon lines are hard to see. It is also a good choices for the people who prefer a tapered line or who want to fish with a line that doesn't sink as readily as fluorocarbon. It casts well and lands softly.

Overall, this is one of the easiest lines I’ve ever cast and I was impressed with its visibility. I got the 3.3 meter version but would love to try out some longer ones (they supposedly make them up to 7 meters). I think beginners would find it easier to cast than level fluorocarbon lines and experienced anglers who just need an extra punch in the wind or with weighted flies would appreciate its turnover.