Conceptually, the Fujino tapered lines are similar to the knotless tapered nylon leaders that fly fishermen have used for decades. There are a few significant differences, though. The most obvious is the color. The Midi lines are fluorescent green. They are produced in lengths ranging from 3.5 to 4.5 meters and they are formulated to turn over well when cast with a tenkara rod. 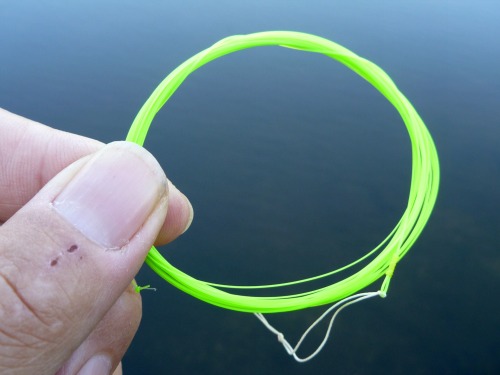 I've written a lot about nylon's big disadvantage, which is it's low density relative to fluorocarbon. It's big advantage, though, is that it takes dye really well so you can get bright colors. The Tenkara Midi,  lines are BRIGHT. I mean they are REALLY BRIGHT. They just pop.

I would highly recommend the Fujino tapered lines to anyone who takes video of tenkara fishing. In most YouTube videos, the tenkara line is invisible. Some people edit an arrow or circle into the video to show where the strike will be. If they used a Fujino Midi line, the viewer could see the line and the strike without the need for editing. 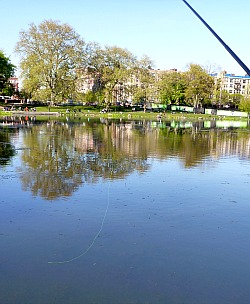 I have to say that the green Midi can get lost against a green background, as indicated in the top part of the photo to the left. Against the water, though, it is extremely visible.

While brighter color is a definite advantage that nylon has over fluorocarbon, its lower density is a definite disadvantage. Nylon just doesn't cast as well as fluorocarbon if you have to cast into any breeze at all.

The taper that is built into the Fujino lines definitely helps their casting qualities, though. The lines taper from Japanese line size 10 at the rod end down to size 3 at the tippet end.

The lower density actually does have redeeming features, though. The lighter weight of nylon makes it easier to hold off the water than fluorocarbon. Some of the tenkara anglers moving to longer lines are using the 4.5m Midi line  with their 3.6 and 4m rods.

Despite being tapered lines, I found them to cast better with softer rods than with the stiffer rods. For most tenkara rods they will be fine.

The lines come pretty much just like a knotless tapered leader. The tippet end of the line is just a plain end, and the first thing I would do is tie a figure 8 knot in the end of it so that the tippet can be attached the same way it is attached to a level line.

I've been doing a lot of on demand/spontaneous teaching this year during events at Sundance Mountain Resort. (Our new home base for Oni School).  And the Fujino lines make it so easy for me to teach a basic cast in 5 min or less to people ranging from kids as young as 5 to experienced fly fishers with many decades of fly fishing experience.