The Fly Fishers International organization holds an annual Fly Fishing Fair, which this year was in Livingston, MT. Although Montana is known much more for fly fishing than for spin fishing, the water is the same, the fish are same and the spin fishing is very, very good.

I was there to give a presentation on tenkara fishing. (Miyoshi Shiozawa, the Chairman of Tenryu, was initially scheduled to give the presentation but was unable to attend and asked me to give a talk in his place.) The presentation seemed to go well and the feedback was pretty positive.

As long as I was attending the fair, it seemed only natural to have a booth at the show. Sales were painfully slow, but I guess that is to be expected at a fly fishing event that seems geared primarily to people who love fly casting. Tenkara involves casting but it's just not the same. 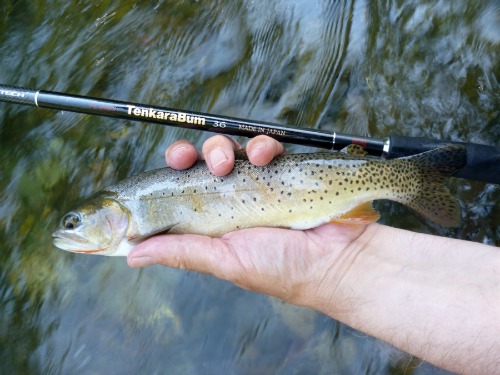 I actually did some tenkara fishing, but I must admit most of the fishing I did was with spinning rods. Tenkara is now pretty well established in the US. Ultralight spin fishing for trout in mountain streams with premium Japanese equipment, while wading, is so new it isn't even on most people's radar. I aim to change that. 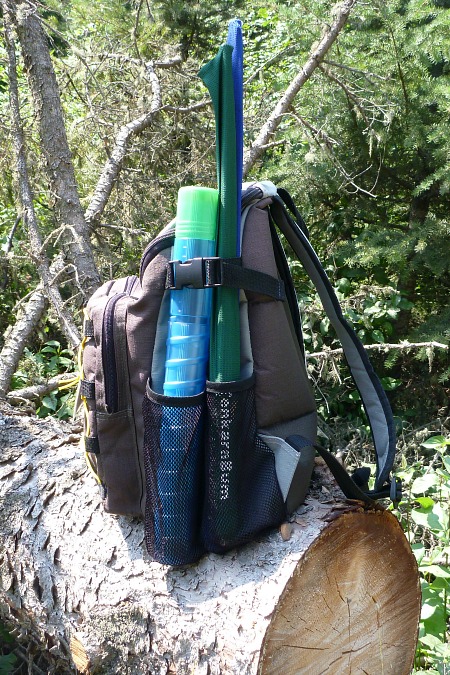 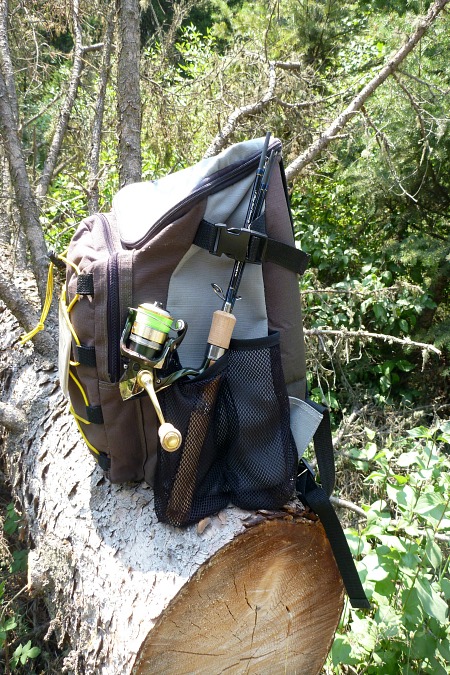 Most of my fishing on this trip was with the Tenryu Rayz Integral RZI50UL-4. The RZI50UL-4 is a 4-piece rod that is ideal for travel but do not think of it as just a "travel" rod. It is probably the highest quality spinning rod you could find for backpacking. It easily fits in the Medium Rod Case, left photo above, and doesn't even extend above the top of a backpack, as do the TenkaraBum 36 and 40, which are in the pocket beside it. If your backpack has rod pockets, the rod will fit easily, broken down with the reel still attached. If you have quite a ways to go between fishing opportunities, the rod will fit entirely within most backpacks. 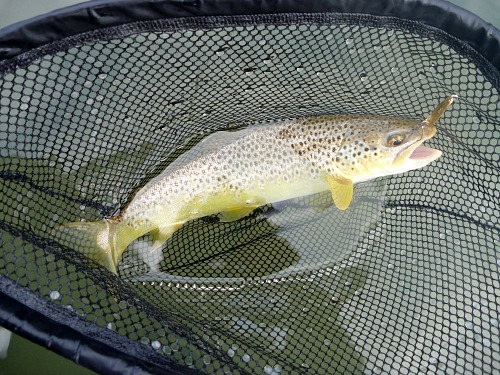 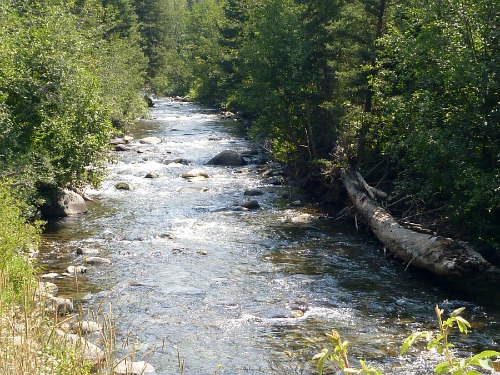 As good as the fishing was in the Yellowstone River right by town (generally 5-6 fish in each 1.5 to 2 hour session), it was much better in a much smaller stream south of town. I don't know how well known the stream is so I won't name it here. Realistically, there are no secret streams, but many do not need national attention. (Equally realistically, my mentioning the name probably wouldn't significantly increase the fishing pressure, but still...) 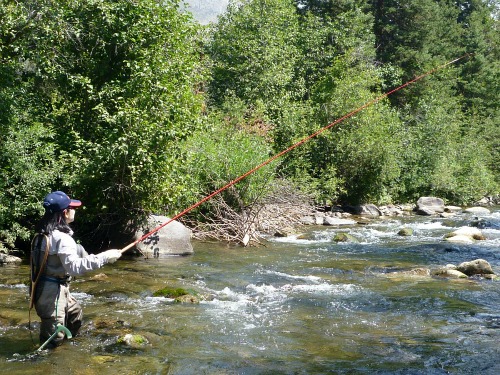 The stream is fairly small and could be described as perfect tenkara water. It is a relatively high gradient mountain stream with lots of seams, eddies and plunge pools - and lots of Yellowstone cutthroat trout. It is just tight enough that you have to watch your back cast and your forward cast carefully. There are spots that are tight enough that a 3.3m rod would be ideal (and that is what Luong Tam recommended when he told Misako and me about it), but there also are spots where a 3.9m rod is not too long. 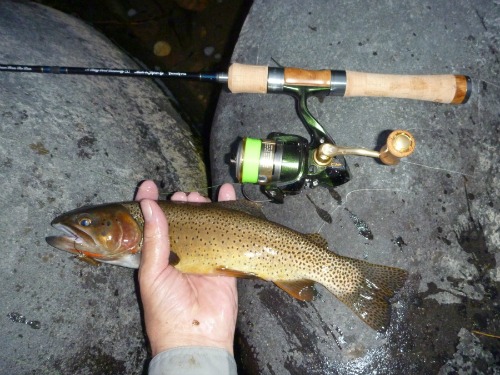 Although I have now fished with several Tenryu Rayz spinning rods in streams large and small, for wild and stocked fish, I have to say I was a little surprised at how well spin fishing worked on the stream we fished. I used the Daiwa Crusader 2.5g spoons exclusively, and boy, did they produce.

Just a few days ago I read a comment on Facebook about a place that was said to be great for fly fishermen because bait fishers and spin fishers couldn't fish there - they were allowed to but for some reason the guy who posted the comment thought it wouldn't be possible. I haven't seen the place, but I bet he hasn't seen a skilled keiryu or spin fisherman! Small, tight streams? No problem! 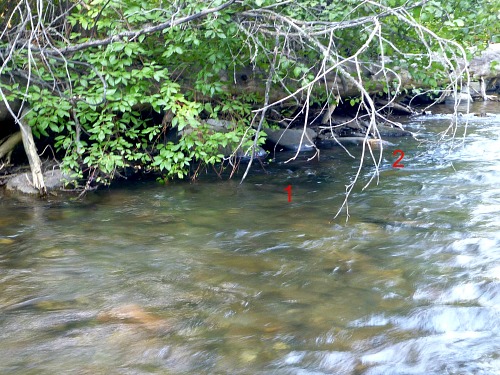 As much as you hear about the pinpoint casting that is possible with tenkara rods, it is just as possible and just as important when spin fishing in a mountain stream. I have read a couple times of mountain stream lure fishing in Japan described as the "casting game." Casting accuracy truly is critical. The photo above shows a location that yielded two fish, one just between the two small branches that extend down to the water (1) and one just a couple feet upstream between another two branches (2).

The second one was the more interesting of the two. The first fish chased the spoon for at least 10-15 feet before catching it. The second fish was tight to the rocks. I had waded upstream after catching the first fish, and noticed there was a small opening in the branches that might yield another fish. I could not have been 10 feet away at the time and almost lazily flipped the spoon just past the (2) location (closer to the bank). I hadn't retrieved the spoon more than 6" before the fish darted out from the rocks and nailed it.

Under low branches are prime locations for trout. There may be ants and beetles that fall from the branches, and the branches also shield the trout from Ospreys. Don't pass them up if you can get a cast in there. 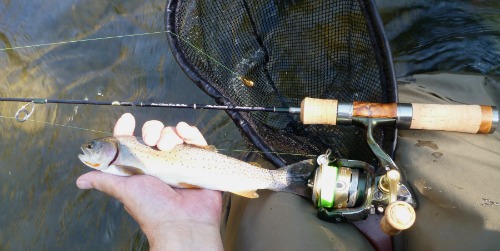 One of my biggest surprises came after I had gotten a snag and had to break the line (which unfortunately broke at the tippet/line knot). Up until then, I had always tied a length of 5X tippet about the length of the rod to the end of my hi-vis line. It turned out that I had left my tippet spool in the car when I switched from tenkara to spin fishing, so my only choices were to go back to the car or tie the bright green line directly to the spoon. I chose the latter. The fish didn't care! It was towards the end of our day so I only caught another three fish, but the rate was about the same as I had enjoyed all day long with the clear tippet.

It seems that about once per trip I hook a fish near the end of the retrieve, with no more than about 4' of line left beyond the rod tip. This trip was no exception. On such a short line, the fish go crazy. Cutties don't jump much, but a rainbow hooked like that will be out of the water more than in it. Very exciting - and nothing like it exists in tenkara, keiryu or fly fishing.

I tend to finish the retrieve with the rod tip only a few inches above the water's surface. Twice now, a fish has made a swipe at my spoon almost right at the rod tip. Eventually one will connect. Now THAT would be exciting. I may have to stop doing that because I don't know if the rod would survive.