Seeing that it is already the 26th, it is a bit late to file a trip report for the 21st but I had almost decided not to file one at all. Most of my fishing trips are in truth gear evaluation sessions as much as they are fishing trips. Last Sunday was the only trip I can remember in the last couple years in which I fished the entire day with only one rod. 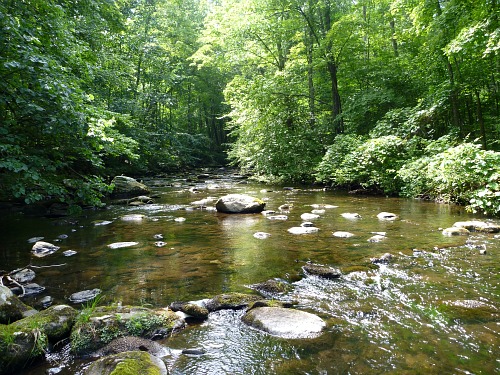 The water was low and clear. I had chosen a seiryu rod, which turned out to be appropriate because "seiryu" means "clear stream" and seiryu rods are also well suited to the size of fish I caught. I think the largest may have been about 7", but most were smaller. 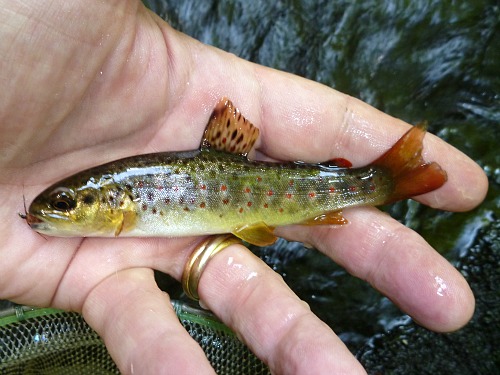 The rod I chose, a 9'8" Shimotsuke Oikawa III, was considerably shorter than I could have gotten away with. I just love the rod because it weighs next to nothing and a 6" fish puts up a good fight on it. Despite the water being low and clear, and the sky being cloudless for much of the day, and the rod being too short for anyone who cares about such things to call a tenkara rod, I had a pretty respectable day with 14 wild trout brought to hand (if they're this size in NY, you know they're wild). 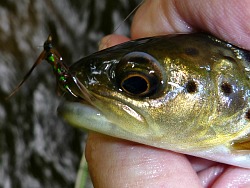 I did fish a couple different lines and a few different flies. For me the flies are a big part of the fishing, and playing around with different flies  keeps it interesting.

If I had to fish with just one fly, fishing would lose a lot of its appeal. I do not in any way attempt to match the hatch, I just like trying different things - and I don't mean changing flies until I find one that catches fish. I'm just as likely to take a fly off after catching a fish or two, in order to try something else and see if I can fool a fish with it. 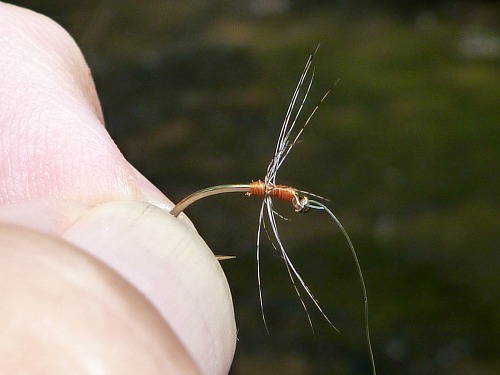 One of the things that interests me is how little I can put on a hook and still fool a fish into taking it. Upon seeing the close-up photo of the fly above, I now think the fly was overdressed. The next iteration will have a shorter head, begun a little further back and leaving a bit of bare shank directly behind the eye. I understand early Catskill school fly tyers left a bit of bare shank to leave room for the Turle knot, which was in fashion at the time. (I use the Turle knot when I fish with a horsehair tippet.) The above fly did catch a fish, although the photo did not come out well enough to publish.

I spent the day fishing with a guy who has had a tenkara rod and a seiryu rod for months now but hadn't yet fished with them. Seeing that it was a fishing trip rather than a guided trip (I'm not a licensed guide), after a short casting class to be sure he could get his fly where he wanted it, we separated and just fished.

One comment he made stood out like a beacon. He mentioned that his fly kept hitting rocks. The water was indeed low, but I fished in front of him and behind him, and I'm sure at least part of the time in the same water he had just fished. At least part of the time we both fished the same flies (I had given him a Killer Kebari to start with). My flies weren't hitting rocks - at least not enough to mention. After a while it became clear, the rocks were actually fish. Instead of his fly hitting rocks, fish were hitting his fly.

He felt the hits but misinterpreted them as being rocks. (He was fishing a Suntech Kurenai HM30, which is just as sensitive as my Oikawa III, so I can well imagine exactly what he felt). Understand that we were fishing for small wild trout in a fairly placid stream - they didn't hit the flies hard and they certainly didn't hook themselves (which probably happens more than we realize on the fish we actually do catch, as the hook point catches on the way out as they try to eject it).

When fishing a wet fly upstream or up and across, if you are waiting to feel the take you are waiting too long. That is why I am so adamant about fishing a Hi-Vis line. You have to see the take to be able to tighten the line fast enough to hook the fish. If you are fishing in the gin-clear water of Japanese mountain streams, you can often see your fly under water and see the fish take it (or at least see the flash of it's side as it turns). If the water you fish isn't that clear, you'll have to watch your line.

If you keep the end of your line at or just above the water's surface, it is easy to see it twitch or hesitate. If you have two or three feet of line in the water, you no longer have an obvious point (the junction between orange or chartreuse line and clear tippet) to watch, so it is much harder to notice a subtle twitch or hesitation.

What I should have told him, after the casting class and before setting him loose, was that if the end of the line moved - at all - in any way that he himself didn't cause, immediately tighten up. You might tighten up on rocks, and you'll definitely hook a few sticks, but you'll be surprised how many of those sticks and stones have fins and will pull back.