The Sowbug Roundup is held each year on the third weekend of March in Mountain Home, Arkansas. It brings fly tyers from around the world to sit and tie, and to visit with people who come to watch them tie, ask questions and talk fishing for a bit. It is a very low key and very enjoyable weekend.

Although the Ozark Regional Airport is nearby, I was advised to fly into the much larger Springfield, MO airport instead and drive down. That's what I did the first two years I attended the Sowbug Roundup, but this year I flew into Kansas City instead, planning to meet up with Alan L and Jimi H on the following Sunday for a little carp fishing. (I predict fixed line carp fishing is going to be hot).

I arrived a day early so I would have a chance to fish a bit on the way down from KC and Mt. Home. I'd gotten a suggestion from Alan about a stream in one of the Missouri Conservation Areas that might be worth fishing. According to the Missouri Department of Conservation, there were 36 species of fish in the stream the last time it was sampled, of which I'd only caught 6 before. That seemed to make it a pretty high likelihood that any fish I caught would be a new "lifer." I'm not really driven to catch new species, but I do find it fun to fish for fish I'd never fished for before.

As it turns out, I'm not really used to midwest low gradient streams, and at first glance, the stream seemed featureless (I realized later I did not take one photo of the stream all day). My day almost turned out to be featureless as well, and thoughts of catching a half dozen new species gradually gave way to thoughts of "are there really 36 kinds of fish here? Are there any fish here?"

When I finally slowed down enough (which takes a while for a New Yorker), I began to see darters. I could not get them to show any interest in my speck of worm, though. Well, that's not quite true. They'd come look at it, but they wouldn't take it.

It wasn't until I saw some fish taking flies on the surface that I started keying on the right location (a bit of a channel that seemed to be only modestly deeper than the surrounding relatively flat creek bottom). I still had on a bit of worm on a tanago hook but when put in the right place I started getting a few fish. 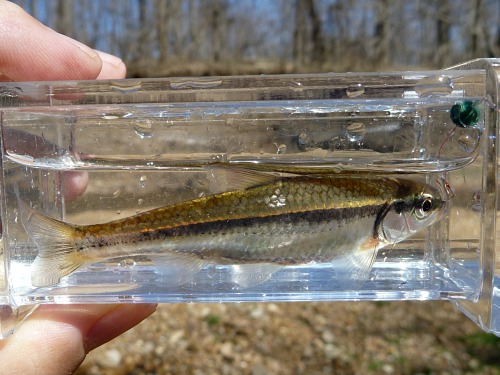 When I saw the first fish, I was a bit disappointed. I thought it was a Duskystripe Shiner, which I'd caught last year on my way down to the Sowbug Roundup. That evening, after checking the sampling report and realizing that the Duskystripe shiner was not found in that particular stream, and on further research, that it isn't even found in that part of the state, I did more digging and decided it was an Ozark Minnow. The two species do look similar, and at first I thought that last year's Duskystripe Shiners were Ozark Minnows (until I was corrected by a microfisherman with much more experience in fish identification). I was corrected this time as well, and the fish has been identified as a Bleeding Shiner. That is one of the three challenges in micro fishing (1. finding them, 2. catching them, and then 3. identifying what you've caught).

I caught several with a light line, a Unibobber, one #10 Dinsmore shot, a New Half Moon snelled tanago hook and a speck of worm. The fish kept hitting my Unibobber, though. It's not just trout that strike at strike indicators. (I've also had common shiners hit a very small pinch-on foam indicator.) I figured the fish hitting the indicator was indication to put on a fly instead. There was just a bit of a breeze, so I was able to keep on the same 4# test fluoro line and cast a fly. It wasn't quite Irish Lough-style dapping but I did get a bit of an assist from the breeze.

I actually hadn't planned on fly fishing, though, so my Altoids Smalls tin of micro flies was still in the car buried in my suitcase. The flybox that lives in my Tippet Fly pouch had only one really small fly, a little woven job that looked to be about a size 20, which I think I had been given at the Sowbug Roundup last year. I know several people who tie woven flies, but only one who ties them on a size 20 hook. 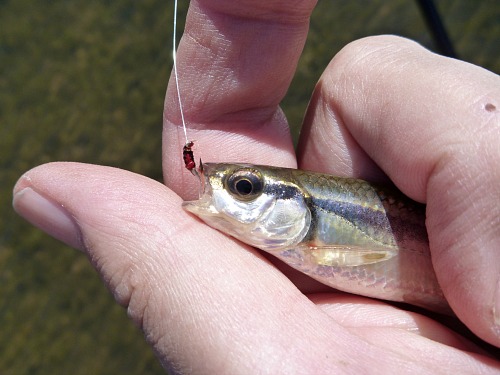 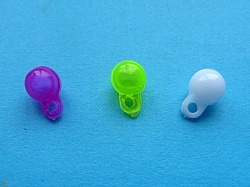 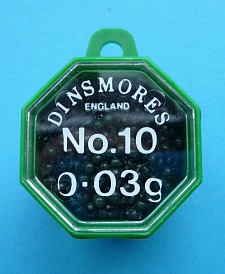 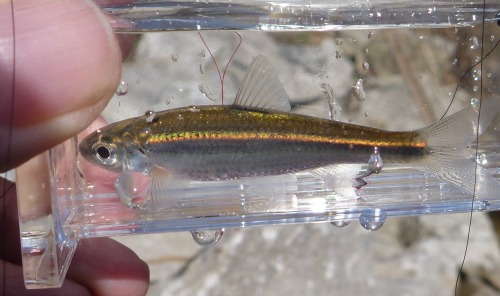