Last Sunday I finally got out for the first time this year. I had been looking forward to it for weeks but sometimes the fishing is much better sitting at the vise imagining than standing in the stream casting. I haven't yet cracked the code for winter fishing and it was not a stellar day. (In other words, I got skunked).

Almost every time I go fishing I evaluate new rods, or at least rod/line combinations, and take several rods with me. After almost two months without fishing, I had a lot of rods I wanted to fish. I think I took ten with me and left a couple more home for another day.

Of the rods I fished, two are available on the site now, one will be as soon as I can get a page written for it, four will be when they arrive from Japan (and I can get pages written) and one more probably will be at some point.

Of the two on the site, the one that surprised me was one I thought I knew - the Daiwa Kiyose 43MF. I guess it underscores how much of my fishing is actually rod evaluation and how little is just fishing. It had been more than a little while since I'd fished the 43MF even though I like the rod quite a lot.

What surprised me about it was that always before I had fished it with a size 4 line. After all, it is a big, beefy rod. When I switched to it Sunday, I had been fishing a lighter rod with a size 3 line and I just swapped rods, keeping the size 3 line. The Daiwa Kiyose 43MF does very nicely with a size 3 line! The rod is rated by Daiwa as a 7:3, but the last three or four sections are soft enough that it will cast a lighter line than you think. If you want to cast a very long line, you'll probably have to bump it up a bit, but for about 15' and under you can certainly fish a light line if you wish. 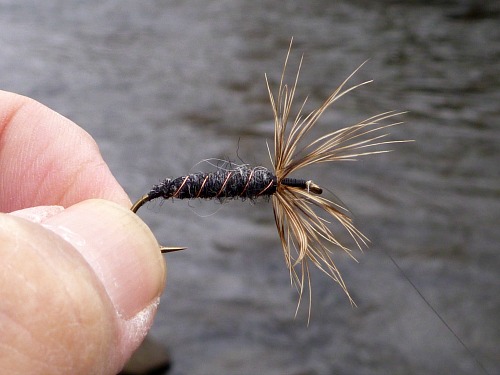 Of course, having a fly with just a bit of weight to it does help a light line turn over. The Keeper Kebari, tied with a yarn body on a size 6 Daiichi 1560 (1XL nymph hook) is plenty weighty enough when the yarn gets wet. The fish would have none of it, though. I tried much smaller flies as well, and they wouldn't have them either. The 43MF did fine with both, though.

The other rod that's already on the site is the Nissin Fine Mode Kosansui 320. It is an interesting mix of characteristics. On the one hand, it is an extremely light rod at just 1.6 ounces without the tip plug. I has a fast tip and casts a size 3 line with ease. That would be ho hum news if it were a seiryu rod, but it's not. It's a keiryu rod and measures in at 25 pennies.

Think of the penny rating as a rod's capability to fight fish. At the lowest rating I've seen, just 6 pennies, a rod is soft enough that a 5" brookie puts a significant bend in the rod. At the upper end, measuring 46 pennies, the Hane is stiff enough to put a lot of pressure on a fish. It would take a huge fish to bend it to the cork. Twenty five pennies is a bit more than the Iwana and is up with the Suntech Field Master. 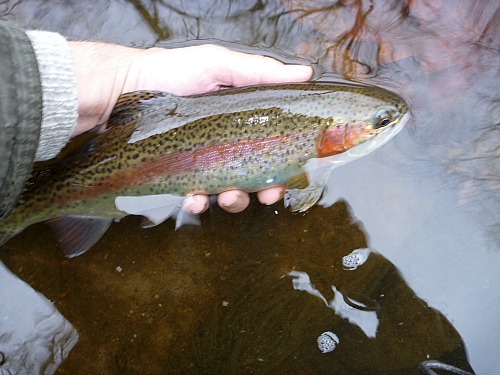 The fish above was caught with the Field Master, not with the Kosansui 320, but a 25 penny rod can handle a fish that size without a problem.

If I add a longer keiryu rod to the site, though, I think it is more likely to be the Nissin 2Way 540ZX and possibly the 620ZX. The Nissin 2Way ZX rods have been well received, do very nicely with large trout (and carp) and are very reasonably priced.

Tenkara was introduced into the US as an ideal method for fishing small mountain streams. And tenkara rods really are ideal for that purpose. However, soon after it got here people started pushing the envelope (hey, this is America - that's what we do). As I have long argued, the further you get away from unweighted wet flies in small, high gradient mountain streams, the less ideal tenkara rods are.

For fishing heavily weighted nymphs, some of the stiffer keiryu rods are really much better. They can overcome the resistance of pulling line through several feet of water to set a hook, and they have the muscle to guide a fish out of the current and into quiet water.

I think more and more people this year will look to keiryu rods for fishing bigger water. Tenkara rods pretty much max out at about 4.5 meters (14.5 feet). Longer than that and they'd be too tip heavy. Keiryu rods get up to twice that long. The difference is that they are two handed rods. You can hold - and cast - a much longer rod two handed than you can one handed. You use the larger muscles in your upper arms and back rather than the much weaker muscles in your forearm and wrist.

There's an awful lot of water in the US that is not small, high gradient mountain streams. (For that matter, there are an awful lot of fish that aren't the 8 to 12 inch trout that tenkara rods are really ideal for.) I really think there will be interest in fishing wieghted nymphs in bigger rivers, plus hoppers, sculpins, big ugly streamers, and even Tenkara no Oni's size 2 kebari. They'll all catch really nice fish but you're not going to want to fish them with a soft 6:4.

Beyond that, I would be willing to bet that there are people, perhaps mostly those who fish for species other than trout, who will fish keiryu rods as they are fished in Japan - with a very light line and a split shot or two; with a nymph caught from under a rock, or perhaps a red worm or meal worm or even a kernel of corn. No, it's not tenkara, but with the very long rod and very light line - and very, very good drifts - it's a far cry from cane pole fishing, too, and an even farther cry from a spinning rod and a forked stick. There are just too many rivers with too many fish to be caught (that aren't caught with flies). If that's not your thing, that's fine, but if it is - or even might be - I'll have some rods for you. 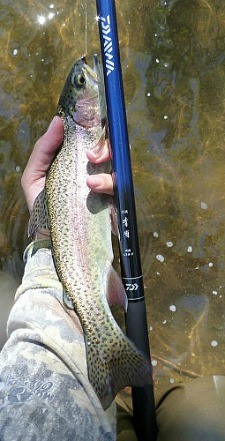 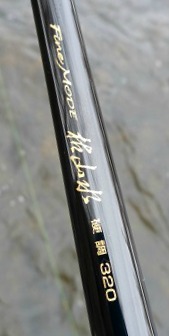