The deep pool where I'd caught my first fish last week did not yield another on this week's trip. It was quite a ways up the stream and into the day before I even had a hit. Just the slightest tightening of the line was all the indication I got. Luckily, I was paying close attention and that was sufficient. One fish in the net.

There is a somewhat common statement on the internet something along the lines of "post a photo or it didn't happen." I have a photo, but I won't post it - at least not today. Turns out I was fishing a rod that I will introduce on Black Friday - not really as a Black Friday Sale item, but it is a rod that I don't want to reveal now. (I mean, what's the fun of a surprise if you announce it days in advance?)

I will give a "thank you" and a tip of the fishing hat to Adam R for giving me some hound hair so I could tie some more Hen & Hound flies. That's what tricked the trout.

Won't show a photo of the fly, either. I can tie beautiful flies, but I don't. The fly that caught the fish wouldn't win any prizes. The hackle was a bit too long, the thorax a bit too large and stray hackle barbs and dog hair stuck out of the body at odd angles.

Not long after that first fish, the breeze freshened and the size 2 line I had been casting was too light to fully extend. Rather than making a modest adjustment, I went all the way to a size 4 line.

To say I was surprised would be an understatement. I never, ever fish a size 4 line with a soft, mid flex rod. I should! Or at least, in a breeze I should. If you are just starting out, perhaps you should, too, breeze or no breeze!

Casting was easier than I can ever remember. No force was required, no consideration of too much wrist flex or not enough wrist flex or whether my forearm chop was choppy enough. I just stopped the forward cast with the rod tip still high and the line rolled out and straightened all by itself. It was beautiful.

Size 4 line does sag more, and it is harder to keep the end of the line above the water's surface, but that problem is actually pretty easy to solve. Shorten the casting line a bit and lengthen the tippet a bit, keep the rod tip high and the end of the size 4 line will be above the surface.

With more experience, you can lengthen both the line and the tippet, but lengthening the tippet is the critical part. I now believe that the 3.5 feet of tippet I have suggested (for the last ten years) is too short. If you fish a yarn-bodied wet fly the yarn absorbs water, providing a bit of weight to help fully extend the tippet - a 5 foot tippet. Even without the yarn, a wet fly tied on a extra heavy hook should turn over pretty easily. 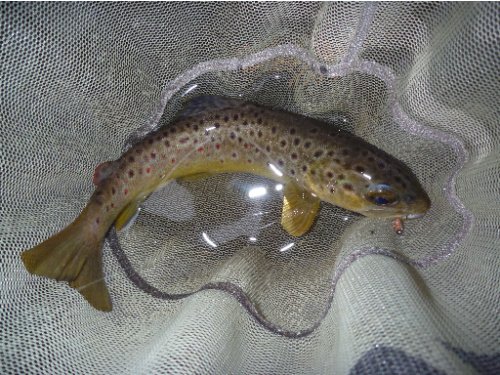 At the end of the stretch I usually fish on that particular stream there is a large, deep pool. It is deep enough that an unweighted wet fly rarely gets down to the fish. For the first time in a long time I tied on a bead head Killer Bug. Bang! First cast got bit!

I was fishing thin tippet (7X) to help the fly get down more quickly. A cast to the riffles at the head of the pool yielded a strike as soon as the fly hit the water. I was surprised and reacted too forcefully, breaking the tippet and losing my only bead head Killer Bug.

By then, the breeze had died down, so I switched to a size 1.5 line and a regular Killer Bug. The lighter line did not sag enough to ruin the Killer Bug's drift through the pool. It did sag enough to provide very sensitive strike indication, though. Within only a few minutes I caught two more trout and two fall fish.

I stopped fishing Killer Bugs over a year ago because a hackled fly has more resistance to being pulled through the water (Trip Report 8-25-19). However, having a rod that can cast size 1.5 line changes the equation. The weight of the copper underbody and wet wool helps the light line turn over, and the light line doesn't pull the fly through the water nearly as much. The rod, line and fly still work together as a system. A very soft rod, very light line and fly with just a bit of extra weight work together just fine. You don't fish a Killer Bug with a size 4 line, but with a 1.5? Oh yeah!

I think I'm going to tie some Killer Bugs and Killer Kebari!