Saturday was a very interesting day. I started the day fishing my Daiwa Enshou LL36SF, which I don't fish nearly often enough. For a little while now I have been experimenting with nylon lines, and I thought that perhaps the slow, full flex rod would cast them well. I also started with a line that years ago I had decided was absolutely too light to cast.

Not long after I started TenkaraBum.com back in 2010 I sold hand-tied  tapered fluorocarbon tenkara lines constructed from a salt water fishing line made by Suntech. When Suntech discontinued the line and I could no longer get hi-vis fluorocarbon line in sizes 1.5 and 2, I started making hand-tied tapered lines from nylon. One of the nylon lines I used was 10 lb test.  At about that time I tried to cast a line consisting of just the 10 lb test nylon and couldn't do it. 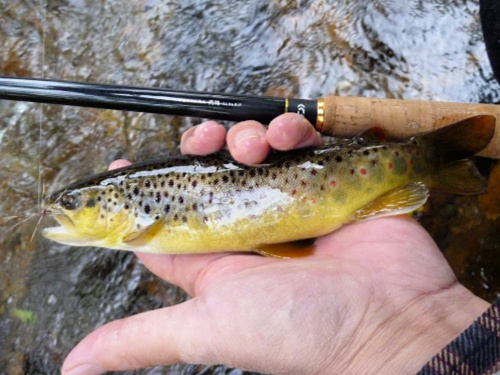 This trout's belly was almost the same color as the line!

Saturday was the first time since then that I tried to cast that 10 lb line. Lo and behold, I could cast it. And not just cast it, I caught fish with it.

The general rule of thumb when converting Japanese line size to a pound test rating is to multiply the Japanese size by 4, so a size 3 line would be equivalent to 12 pound test. Caution! That only works with Japanese lines! It doesn't work with US lines.

Either US spinning line is weaker for a given diameter than Japanese line, or the pound test rating US manufacturers print on the box is not accurate (or a bit of both). Case in point: the 10 lb test line I used on Saturday has a stated diameter of .30 mm. That is virtually identical to Japanese line size 3.5 (which for Japanese line would have a breaking strength of 14 lb).

When used as a tenkara line, the breaking strength is irrelevant, because the 5X or 6X tippet will break before the line does. The diameter, though, does allow one to compare the US line to Japanese on a more equal basis.

What all this is leading up to is that casting a 10 lb nylon line sounds like quite an achievement, but because that particular line is equivalent to size 3.5, it is not really that great a feat. Paul Gaskell and John Pearson of Discover Tenkara made quite a big thing last year about casting size 3 nylon lines. Last summer, I tried casting size 3 nylon with both the TenkaraBum 36 and TenkaraBum 40. Both rods could do it, but I preferred fluorocarbon.

What led me to try nylon again was fishing in the wind during the Oni school with a fluorocarbon line and nylon TenkaraBum Tactical Nymphing Sighter. The difference between how the fluorocarbon and how the nylon were affected by the wind has troubled me ever since. Two dissimilar materials are going to cause a degree of hinging even in the best of circumstances. The wind just made it painfully obvious.

To incorporate the benefits of the sighter in a line that had no hinging at all meant making the entire line out of the sighter material. Of course, a line made entirely of nylon would have been much worse in the wind that day, but just as having a "wind line" makes sense, having a line for dead calm days could make sense, too.

The first level lines I ever used with a tenkara rod were nylon. One particularly nice one was a size 4 nylon line my wife had gotten for me in Japan. It worked just fine - except in the wind. Not too long after that I learned of a hi-vis fluorocarbon line and essentially never looked back (other than the brief period of time when I sold the hi-vis hand-tied tapered nylon lines).

Size 3 nylon is tricky to cast. Your technique has to be very, very good. Size 3.5 is easier, and size 4 nylon is quite a bit easier - not as easy as fluorocarbon of course, but actually not too bad.

The TenkaraBum Tactical Nymphing Sighter .013" is Japanese line size 4. If you wanted to experiment with nylon line, you don't have to buy a whole spool from which you might use 4 yards and have no need for the rest. 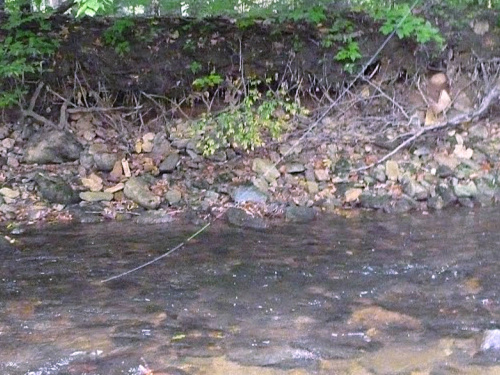 Of course, size 2.5 fluorocarbon has one huge advantage over size 4 nylon. It is significantly easier to cast.

The TenkaraBum Tactical Nymphing Sighter comes in lengths that are too short for a tenkara rod (other than the Nissin Air Stage 190 perhaps). It is no problem to tie two of them together, though, which yields a line of about 13 feet. That length works well with either the TenkaraBum 36 or the TenkaraBum 40. Blood knot, surgeon's not, back to back Uni-knots, they all work.

Tying two of the sighters together results in a line with 30 or 31 inches of white before it gets to the chartreuse and orange sections. The white is really quite visible, and is stealthier than having the bright chartreuse or orange close to the water. If you would prefer the line to start with the orange or chartreuse right next to the tippet, you are free to cut the line there and tie the cut part to the other end of the line, preserving a line of nearly 13 feet (with two knots instead of one). 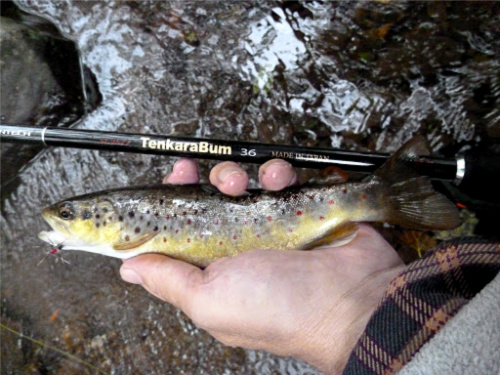 Although I started the day with a Daiwa Enshou LL36SF, after a couple fish I switched to a TenkaraBum 36. I was actually a little surprised that the tip-flex TenBum 36 cast the nylon line better than the full-flex Daiwa. The Daiwa worked, but I was able to get tighter loops with the TenkaraBum rod. Not on every cast, of course. As I said, the nylon is not as easy to cast as fluorocarbon and if you want to fish with nylon line, you will have to practice!

You will probably decide you prefer fluorocarbon to nylon. However, if you like to use a sighter, and want to eliminate any hinging you may get between the fluorocarbon tenkara line and the nylon sighter, you actually can fish with just the sighter material.

Plus, of course, it is good practice. With poor form, nylon is hard to cast. If you fish with nylon, your form will improve. 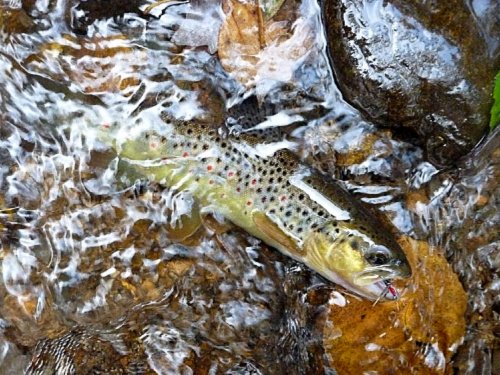 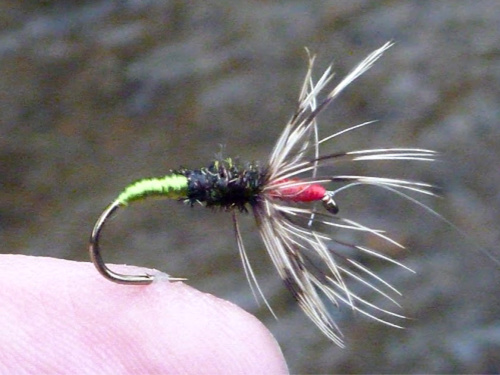 I used two variations of the same kebari, one with the green body shown above and the other with a black body (which I had also used a few weeks ago Trip Report 9-30-18). Both were tied on large hooks, which I would guess are a size 10 (although I had written size 8 in my 9-30-18 report). To tie the fly, divide the hook shank roughly into thirds. The front third is the head and hackle. The head is tapered slightly and is tied with bright red thread. The hackle is hen pheasant, tied sakasa style. The middle third of the hook shank is peacock herl, and the rear third is a tapered body of either black thread or green thread (which turned much darker when wet).

I have been more than a little surprised at how well the flies have worked, with no discernible difference in effectiveness between the black and the green bodies. 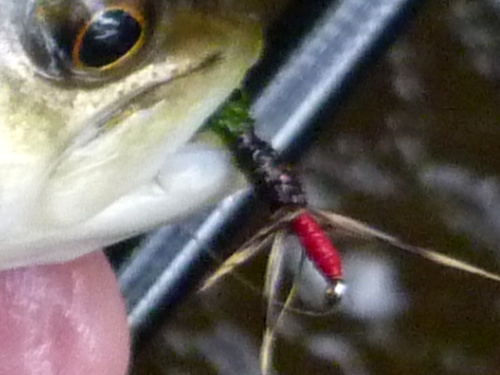 Over the years, I have been pretty vocal in my rejection of the whole one-fly idea. However, if you are not even attempting to match the hatch (there are no flies in nature that look like that) and if you are catching fish, there's really no reason to change flies. Most of the streams I fish do not have abundant hatches anyway.

This fly does have an advantage over a Killer Bug or Killer Bugger in that the sakasa hackle creates more resistance in the water, allowing you to keep the line tighter and thus off the water. It worked very nicely with the light nylon line, and much of the time I was able to prevent the casting line from touching the water's surface even temporarily. That resistance also allows more subtle movement when employing any manipulations.

I still have some of the flies the Chairman gave me, but pretty soon I'll have to start tying my own. If you tie flies because you love to tie, you'll never be a one-fly angler. If you tie flies because you're going fishing and you need flies, and you really don't have much free time, tying one pattern does take less time than tying multiple patterns. And if that one pattern has been working really well for you, well, what can I say? 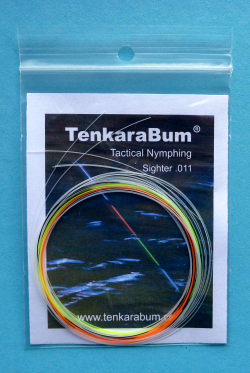 TenkaraBum Tactical Nymphing Sighter. If used for a tenkara line, I would suggest .013" instead of the .011" shown.