Not long ago, one of my customers said he was planning to start a keiryu fishing guide service and wanted to use Daiwa Sieryu X 64 rods instead of keiryu rods. Since I first heard the idea of using a 6.4m seiryu rod for keiryu fishing I haven't been able to get it out of my mind. Today was the first reasonably warm day since he first mentioned it to me, so I set out to try it with a Suntech Kurenai HM63R and a Daiwa Seiryu X 54 (he bought the last Seiryu X 64 I had in stock and the replacements have not yet arrived).

Winter fishing has never been very productive for me. A one-fish day is a good day and a two-fish day is reason to celebrate. I don't recall ever having a "many" day it the winter. Today I had high hopes but low expectations. 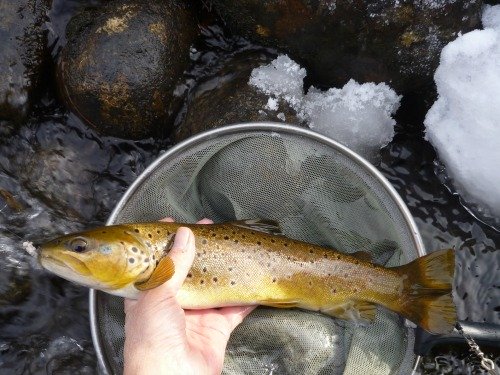 It turned out to be a one-fish day, but that one fish was enough! The net hoop is right at 12", putting the brown at about 14 3/4". That's a pretty good fish for a Kurenai, but the most encouraging things were that it was hooked and fought in reasonably fast current and landed with 8X tippet.

Once again, Coach has been proven right when he said I always underestimate the capability of the rods. The fish did get below me, but the rod is so long that when I held it straight up (perhaps not what you would want to do with a really large fish) it was not hard to get the trout's head to the surface and essentially slide it (surf it?) all the way back up to where I was standing. It still had some fight left in it, but we were fighting where getting it into the net was at least possible.

I guess I have thought of the Kurenai as modest fish rods because the tip sections are so soft. However, with a fish like today's (or even a bit smaller) the tip sections really do not come into play. They are soft enough that they are pointing directly at the fish. The battle is fought by the middle of the rod, and the longer Kurenai rods are firmer through the midsection than I had remembered. They're still not big fish rods, as they are limited to 6.5X tippets, but fish in the mid teens are fair game even with some current.

Being a one-fish day, I didn't get to put the Daiwa Seiryu X to the test. However, one thing was clear as soon as I started fishing with it: the future keiryu guide made the right choice with the 6.4m rods rather than 5.4m. He will not be on a tiny stream, and the added length is a big plus. Fishing with the 5.4m rod just felt like I was fishing too close to where I was standing.

With a light keiryu line, the split shot is going to want to hang straight down from the rod tip, so even if you do cast out (like you would with  a tenkara rod) it won't stay "out." The shot and the bait will be pulled back towards you by gravity.

The ability of the Suntech Kurenai HM63R to handle a 14+ inch fish in current as easily as it did was not the only surprise of the day. I rarely fish multiple flies, or in this case multiple hooks, but because winter fishing is not very productive I didn't expect many bites so I wanted to maximize my chances. I fished a red wiggler on point, with a split shot about 8" above the hook. A little above the split shot, on a relatively short dropper, I fished a mop crane fly larva. 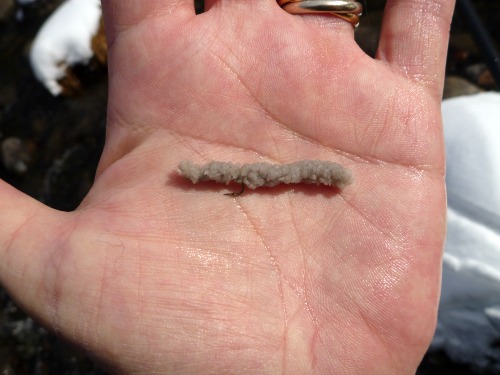 I had never fished a mop fly before because all the car washing mits and mops I found were either bright baby blue or equally bright fluorescent orange. (Unfortunately, there are no "Dollar" stores or WalMarts anywhere close to me. Most New Yorkers do not own cars, and like they say, no one washes a rental car.)

Tom Davis recently published a blog post on the mop fly. In it, Tom said he mainly sticks to gray or cream colors for his mop flies. He said it was because he is boring. For me it is because trout do see colors and there are things they eat that look a lot like a gray mop fly, but nothing do they eat that is Day-Glo Orange! Tom also mentioned that you could buy mop material in skeins, and in neutral colors, from JoAnne Fabrics. A few days later I had two skeins of yarn, one light gray and one light tan. 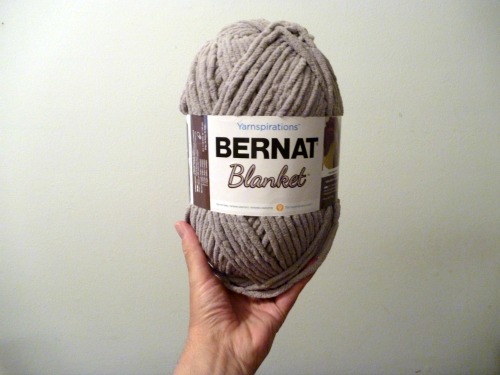 "Skein" gives the wrong impression. I have seen watermelons that were smaller. Each one is clearly more than a lifetime's supply of mop fly material!

I soon found there was a slight problem making mop flies from the yarn rather than the little fingers of the stuff you cut off a car washing mit. The micro fiber fuzz stuff unravels when you cut the yarn!

There is a general sense among many that anything that needs to be fixed can be with the proper application of either superglue or duct tape. This problem was clearly one for superglue, and a liberal brushing of superglue on the cut ends will indeed keep them from unraveling (at least until you lose the fly, which you are bound to do eventually anyway).

Getting back to the things trout eat that look like gray mop flies, I need to modify that statement a bit. There are things trout eat that would look a lot like gray mop flies if only people tied mop flies to look like the things trout eat. To me, a mop fly could look very, very much like a crane fly larva, but nearly all the mop flies I have seen had a black bead and black dubbing. Caddis larvae, perhaps? Crane fly larvae do not have black heads or anything that looks like black dubbing. They just look like little sausage shaped things, often but not always gray. They are also big, twice as long as the little mop fingers from a mit.

So, going for a super simple crane fly larva imitation, I cut about a little under 2" off the gray skein, tied it onto a size 12 nymph hook and painted both ends with superglue. I'll need to fish it more to see if it is worth a more detailed tying description (which would not be quite like any mop fly step-by-step I have seen to date). 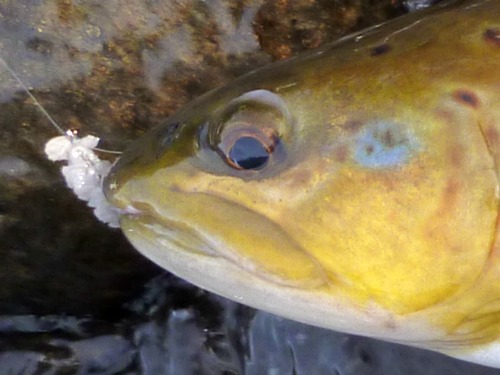 A fly that needs no bead and no dubbing, just a hook, some thread and some fluffy yarn that is about $9 for a lifetime supply, a couple drops of superglue and a couple minutes to tie, and oh, by the way, outfished live bait probably needs to be fished again (and again). I think you'll be reading about this one again (and again).