Replacement parts for the Seiryu X are not in stock but they are available.

The Daiwa Seiryu X rods are surprisingly nice and surprisingly inexpensive rods for trout, panfish and larger micros. As their name suggests, the rods are seiryu rods, which in Japan are generally used to catch several species of relatively small fish that living at elevations too low for trout. However, some Japanese anglers do use seiryu rods for tenkara fishing. 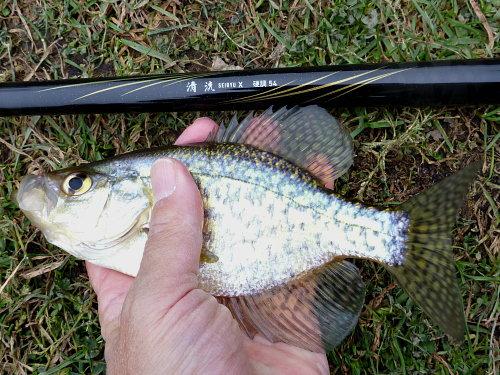 When casting, the Daiwa Seiryu X rods feel much more like Japanese mid flex tenkara rods than many other seiryu rods do. You get a similar action in a much lighter rod - and at a much lower price because all the money goes into the blank, not an expensive cork grip.

The Seiryu X rods come in four lengths - the 35, 45, 54 and 64. As with other seiryu rods, they are light weight, relatively soft rods (the 35 measures just 11 pennies). However, there is one big difference. The Daiwa Seiryu X rods are rated for 5X tippets - roughly 50% stronger than the 6.5X tippets that are the maximum recommended for either the Suntech Kurenai or the Nissin Air Stage Hakubai. Please see my note at the bottom of the page concerning tippet strength, though. 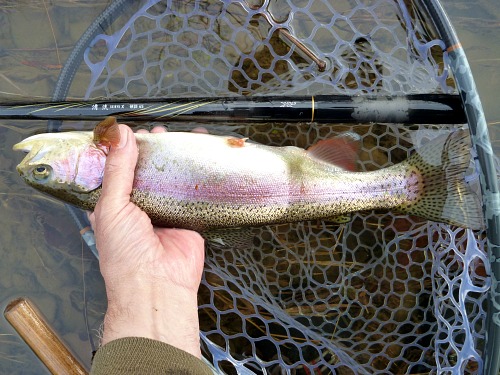 That doesn't make them big fish rods, but you can certainly catch bigger fish with 5X than you can with 6.5X. I know for a fact the rods are capable of catching fish larger than the chubs and dace that seiryu anglers catch in Japan. (That said, if you know a stream that has some nice creek chubs, these rods would be ideal.) Still, I wouldn't target large fish with any seiryu rod. 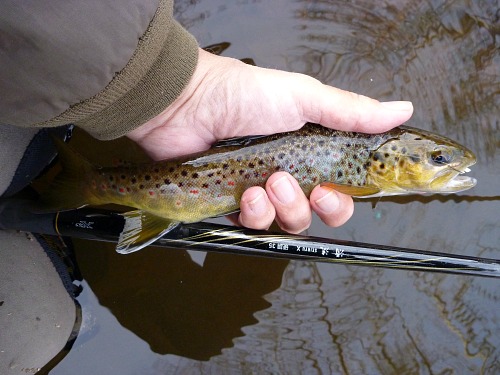 I think the Seiryu X 35 and 45 could prove to be excellent choices for tenkara anglers who like the added sensitivity of a corkless grip and the light weight of a seiryu rod, but who wish that seiryu rods were mid flex (like a tenkara rod) rather than tip flex (like most seiryu rods). The Seiryu X rods have much wider grips than the Suntech Kurenai or the Nissin Air Stage Hakubai, so even those people who generally add tennis racquet grip tape may not need to.

The Seiryu X 35 and 45 would also be excellent rods for Ultralight Worm Fishing. 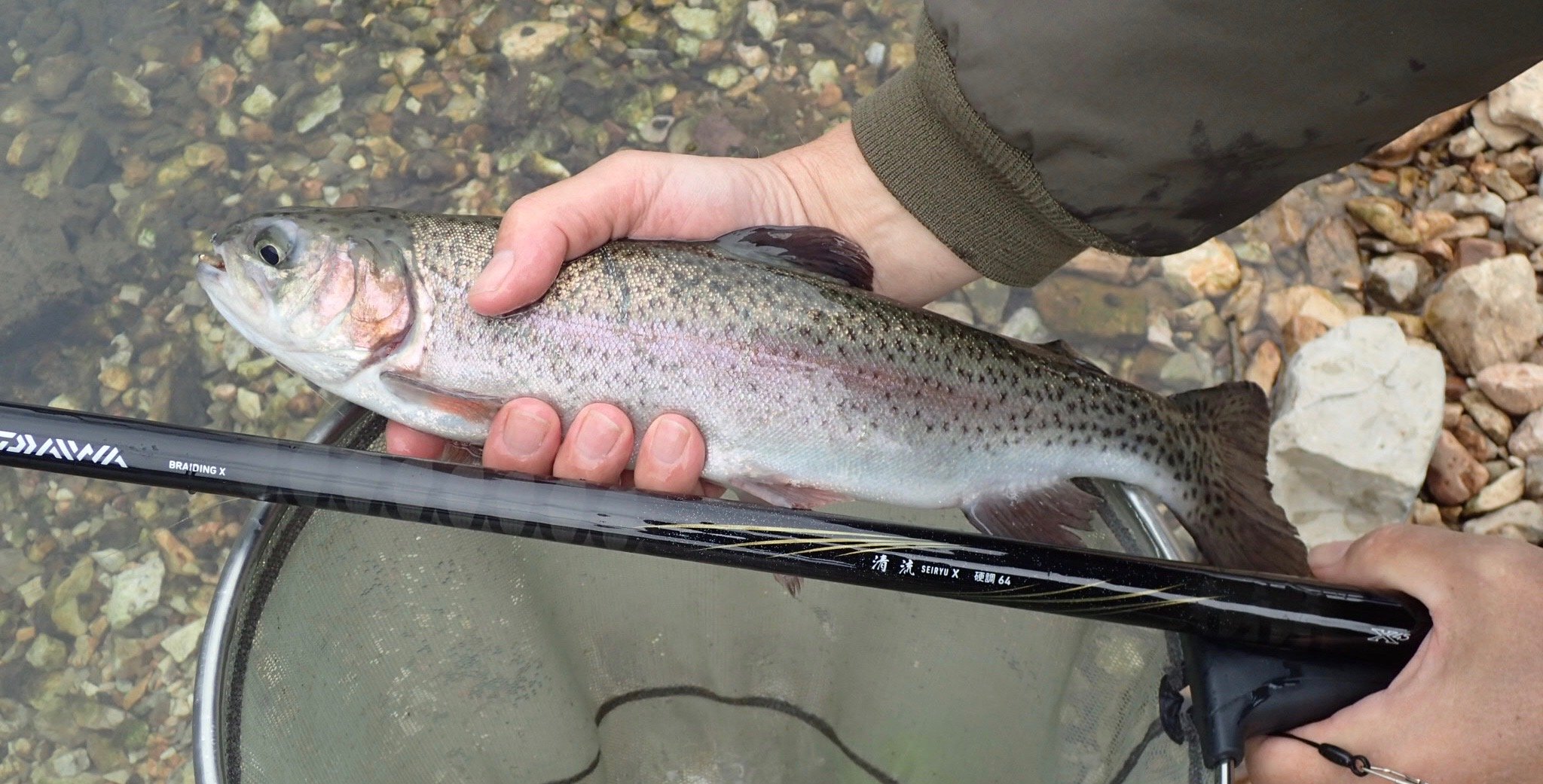 The Seiryu X 54 and 64 could bridge the gap between seiryu, keiryu and tenkara rods. They will offer a very inexpensive intro to fishing with the long rods - whether with a keiryu rig (very light line, yarn markers, split shot and bait) or with a tenkara line and either a weighted or an unweighted fly. A couple years ago, one of my customers considered starting a keiryu guiding service, and planned to use the Sieryu X in his business. It would have been a great choice but unfortunately his plans fell through.

For that matter, the 54 could bridge the gap between one-handed and two-handed casting. It is light enough to cast one handed, but it is a bit more comfortable (and easier on the wrist) to cast it with both hands. When you hook a big fish, you'll need to use both hands anyway.

If you are at all interested in keiryu fishing, particularly an extremely light line style approaching "zero" fishing, the Daiwa Seiryu X 54 and 64 merit serious consideration. Yes, they are seiryu rods rather than keiryu rods, but they will work just fine, they are rated for tippets down to 9X (1.6# test), which is as light as I feel is reasonable for anything more than minnows, and they provide a very inexpensive way to get started.

The Daiwa Seiryu X grip is corkless and has an effective nonslip finish. The X's formed by spiral-wrapped graphite tape are clearly visible on the grip area. 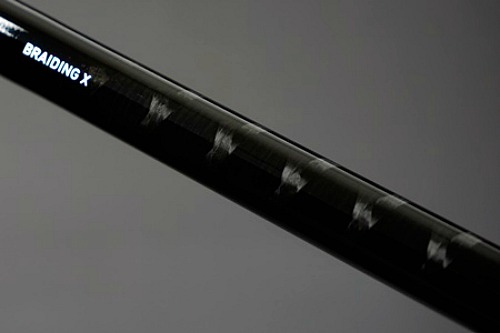 They are also visible on the rest of the grip section. The X-wraps, which Daiwa calls "Braiding X," stiffen the grip section and help prevent twisting. In addition to the Braiding X, Daiwa uses a proprietary 45 degree bias-weave cloth to further reduce rod twist and thereby improve power, stability and performance. 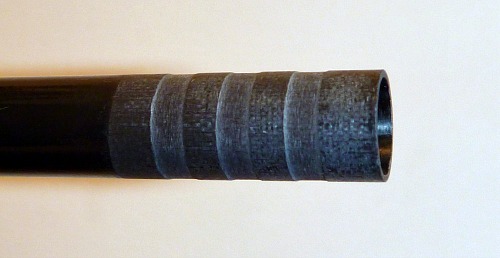 Daiwa also machines rings into the butt end of the rod sections. These rings greatly reduce the chance of getting a stuck section and are found only on Daiwa rods. 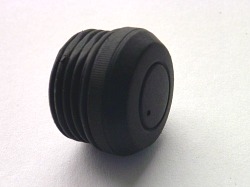 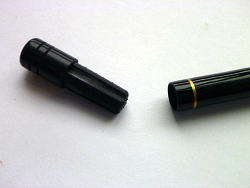 The grip screw cap is knurled for easy removal or tightening and has a hole for ventilation. The tip plug is wooden, with a hard rubber extension that is inserted into the rod tip. The rubber is fluted, which allows you to insert the plug and still keep the line attached. The plug fits extremely tightly - too tightly, really - so I would not force it all the way in or you may have a hard time removing it. If you would like to replace the tip plug with a Fuji KTC rod cap, the KTC-12 fits the Seiru X 35. The KTC-16 fits the Sieryu x 45 and the KTC-20 fits the Seiryu X 54 and 64.

These rods - and especially at these prices - are likely to shake up the US tenkara market a bit. Light weight, mid flex "tenkara" action, 5X tippet capability and low prices. Daiwa has a winner in this one!

**Seiryu rods are used in Japan to catch fish that don't get much bigger than 6". Japanese anglers do not break rods on 6" fish, so I am convinced that tippet ratings are no more than a rough guide, explaining what anglers generally use with the rod. I do not believe they are meant to state the strength of tippet that will break before the rod does.

Rods made in Vietnam

This is the most beautiful rod! And sooooooooooo light for a 3.5m!!! Anybody thinking about the new Seiryu X, DOOOOO IT!!!!

Very nice. Its actually pretty similar to a Japanese tenkara rod in action, so I think it makes a great rod for Tenkara fishing.

Thank you again for suggesting the Daiwa Seiryu X rods; they have been a blast! I am learning more about lines and how to fish these lightweight, nimble rods.

Got the Daiwa Seiryu X 35 out today for some line testing, cast long #2 fluoro and #3 nylon level lines with the best of em. The rod feels similar while casting to the Oni Itoshiro, maybe an inch or so longer and the penny rating is pretty close. Fit and finish is excellent as always.

I’m happy to report that the rod is more than capable of handling 14” largemouth bass. I’ve been catching largemouth on this rod since I purchased it, usually in the 9-10” range, and caught a 14” largemouth on it while fishing a tributary of the Potomac River earlier this month. When I was landing the fish, I didn’t have any concern about the rod breaking, maybe because I didn’t know better, haha. I have a lot confidence in this rod’s ability to handle all types of fish and have used it virtually everywhere I fish, including for saltwater micros.