I have rarely seen as many fishermen on a stream as I did today. Every spot I wanted to fish already had a fisherman in it - and that's not even counting the great blue heron who was there when I arrived. I suppose  the only open season trout stream in the area on the first reasonably warm day was bound to be crowded. (New Year's Resolution - more fishing, less trout fishing). I managed to catch only one fish, a rainbow of about 12", taken with a killer bug and a Nissin SP 390 (12-23-12 trip report).

The fish was the high point of the day, not only because it was the only one, but also because it was caught in a spot that had been pounded by an angler who was there when I showed up. After a quick "Catch any?...Me neither" I gave him some space and went a comfortable distance downstream to a place that looks fishy but has never produced for me. Far enough away to not crowd him, but close enough to see when he left - if he left.  After a while (after fishing gave way to casting practice) I decided to leave the stream and finally eat my lunch but still keep the other angler in sight. As soon as I left, he started working his way downstream. Had I known he was fishing down rather than fishing up I would have gone in above him.

When I was a kid and my dad was teaching me fly fishing (and stream etiquette) if we came upon another fisherman, my dad would ask if he was fishing up or fishing down. Dry fly anglers worked their way upstream, wet fly anglers worked their way downstream, but everybody moved. No one parked himself in a choice location and just stayed there. The first time I asked a couple guys (on the same stream I fished today) if they were fishing up or fishing down, one looked at me like I was crazy, or incredibly rude, or both, and said "we're fishing right here" (and right there they stayed). After that I pretty much stopped asking and just gave other fishermen as much space as I would want them to give me. I should start asking again.

By the time I finished my sandwich and had a bit of coffee, the guy who had been where I wanted to fish had moved far enough that I could enter the stream (where I had wanted to be to begin with) without crowding him. The rainbow didn't come right away but it didn't take too long. A killer bug helps. The presentation you get with a long rod and light line helps. Knowing there's almost always a fish there helps a lot.

The rainbow slipped out of my hand before I could take it's picture.

I didn't stay much longer. My feet were cold, the light was fading and I'd caught enough fish to make the day a success. 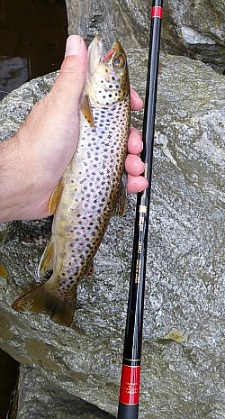 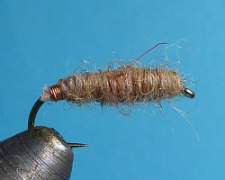