Suntech Genryu Sawanobori was not designed for Czech nymphing. However, it is very good at it!

Genryu is the Japanese word for headwaters. Picture narrow canyons, high gradient streams, no roads and often, no room to cast. The fishing style is often lantern fishing, which is a very short line technique. The style is called lantern fishing because the long rod and very short line are reminiscent of the way lanterns were carried hundreds of years ago (the lantern was tied to a short line, which in turn was tied to the end of a long bamboo pole).

Rather than using a very short rod for casting in the tight quarters, which we generally do in the US, the Japanese use a long rod and short line, essentially lowering their bait or fly directly into eddies or current seams or using underhanded "pendulum" casts to get a bit more distance.

Genryu rods tend to be pretty stiff. The line is short in relation to the rod and the fish are generally small. Anglers will often lift the fish out of the water and then collapse the rod to bring it in. You can't do that with a whippy 5:5 rod!

With a stiff rod, all the little "ticks" as the fly bounces off rocks or "taps" as a fish takes the fly are transmitted to your hand rather than being absorbed by the rod bending. The ticks and taps generally feel different, but you do need a rod that will transmit rather than absorb that information.

The stiffness also means you can get positive hook sets even when fishing in deep water or fast current.

Several years ago I was in Colorado giving a presentation on Long Rod, Short Line tenkara and lantern fishing. While there I used a 4.5m Suntech Genryu Sawanobori in a smaller stream with a 6' line and 3' tippet to catch a number of fish in a fusion of Czech Nymphing and lantern fishing styles. I had absolutely no problem with hook sets. I didn't lift the fish out of the water, but I did have to collapse the rod a bit to be able to net them. I'll tell you, having a leaping 12" rainbow at the end of a 9' line is exciting! 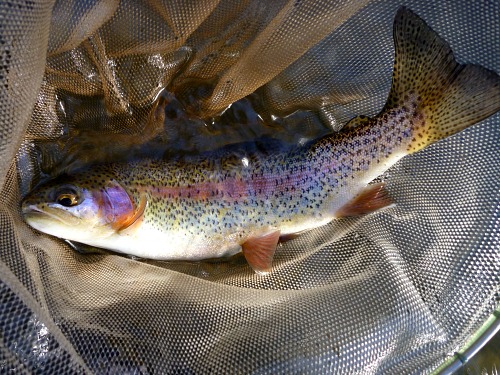 Although the 4.5 meter Genryu Sawanobori is considerably longer than the specially designed nymphing fly rods that most Euro-nymphers use, it is still light enough to use with one hand. It weighs only 2.8 ounces without the tip cap. That's less than many 3.6m tenkara rods.

The 5.4 meter and the 6.3 meter Genryu Sawanobori rods definitely are two-handers, though. Don't knock two-handed rods until you have tried one! You get the benefit of extra reach without the tip heaviness you feel if you try to hold a long rod with only one hand.

Not a Big Fish Rod

The Genryu Sawanobori is a stiff rod but it is not a big fish rod. One customer broke his 5.4m Genryu Sawanobori just as he was about to net a salmon in Alaska. When you are just about to net a fish, the rod is probably already at it's maximum bend. A rod that is very light and also very stiff is not designed to bend as much as the salmon forced his rod to bend. Despite having just broken his rod he promptly ordered replacement parts (and a second rod). He said the rod is by far his favorite for grayling. He just won't use it for salmon any more.

The rod is still an excellent rod for tight line nymphing. You can feel every tick as your nymph hits rocks and every tap as fish hit your nymph. The extreme light weight and extreme sensitivity come with a price. It is not a rod for really big fish.

Largemouth Bass caught bouncing a Bunny Sculpin along the bottom

The Suntech Genryu Sawanobori is an excellent choice for lobbing heavy nymphs (or heavy sculpin patterns) but not for fishing unweighted flies. It's just too stiff for a light (or even medium weight) line to load the rod. However, if the kind of fishing you want to do involves heavy metal, this rod will do it and do it very well. And if you want to feel it if a fish even looks at your fly, this rod is as sensitive as they come. By sensitive, I don't mean soft, I mean it will transmit the sensations of your fly hitting a rock or a fish hitting your fly. You'll be able to feel what's going on as well as see it.

Stiff or Soft Rod for Nymphing?

My views on what makes the best nymphing rod have changed over the past year or so. The trip that prompted my Ultralight Worm Fishing  report proved, at least to my satisfaction, that trout will spit out even live bait if they feel tension on the line. Last year I had an email conversation with a customer who did extensive testing of stiff rods and soft rods, and found he consistently caught more fish with his softer rods. With the stiff rods, he felt more strikes, but by the time he tried to set the hook the fish were gone. With the softer rods, he saw the strikes rather then felt them, and was able to hook many more trout.

I think the stiffer rods are better if you are fishing a heavy nymph (or nymphs) with a short, tight line in deeper water and faster current AND if you are essentially pulling the nymphs downstream with a tight line. If you pull them faster than the current they will look unnatural, so you you want to pull fast enough to keep the line tight but not so fast that they are faster than the current.

The goal is to keep the line tight enough that fish cannot spit the nymph back upstream while you are pulling the line downstream. Underwater video of fish taking nymphs shows that when they spit out flies they do so back upstream. You want the pull to be sufficient to prevent the nymph from going upstream, instead catching in the corner of the mouth as the line pulls the nymph downstream.

Alternatively, a line as heavy as the Nissin PALS SP Pro, which will be needed to load the rod well anyway, will have sufficient sag that you can fish by sight rather than by feel. What I found with the Ultralight Worm Fishing was that line sag provides sufficient slack in the system for you to see the line start to tighten before the fish feels the tension from the rod tip. You will know the fish is there before the fish knows you are there.

If you prefer level lines, I would suggest a size 4.5.

With the greater line sag caused by heavy line, you will need a longer tippet to keep the hi-vis line off the water's surface. Stop your forward cast with the rod high enough that the hi-vis line never even touches the water. 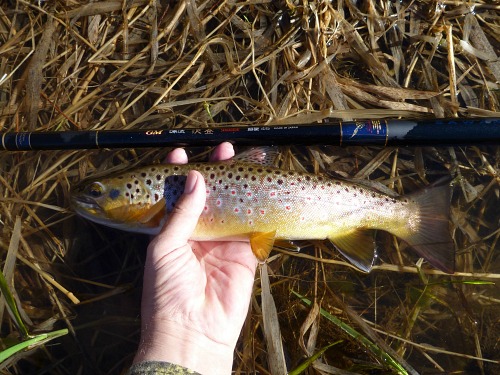 As with all keiryu rods I've seen, the grip is just a widened out section of the rod itself. It is coated with a smooth yet very effective non skid finish. "Sawanobori" is printed on the grip.

If you've only fished with cork gripped rods, you will be surprised at how much more you can feel with the corkless grip.

The grip diameter is considerably larger than on most keiryu rods. There'll be no need for tennis racquet grip on this rod - even for people with larger than average hands.

A feature I had not seen before on keiryu rods, but which makes a tremendous amount of sense, is a section of the same non skid finish at the front end of the grip section - where is where your upper hand would be when fishing two handed. Makes you wonder why all two handed rods aren't like that.

The Suntech Genryu Sawanobori 45 is light enough to fish one handed, but the two longer models would be two handed rods. For smaller streams, or the tighter spots on larger streams, you can always fish the 45 two handed as well. With the butt end of the rod at your waist or side, rather than out in front of you, it effectively does shorten the rod.

The tip is a bit beefier than on most keiryu rods - and even on most of the genryu rods I've seen.

Unlike most Japanese tenkara rods, the Suntech Genryu Sawanobori rods are covered by a one-year warranty.

With the stiffness for greater sensitivity and constant contact with your flies, the Suntech Genryu Sawanobori may be the best rod yet for "Japanese Nymphing."

*Suntech rates the rod for 4X tippets. I would not use anything over 5X.

International shipments are taking weeks longer than normal and tracking does not seem to be working.

The US Postal Service has suspended all shipments to Australia and New Zealand. There are two alternatives. One is the same price as the USPS had been (as calculated at checkout) but may take 3-4 weeks. The other is UPS, which is considerably faster (3-5 days), but also considerably more expensive. If you want the faster, UPS shipment, I will send an invoice for the required amount.