Friday was NOT a good day. I broke two rods, fell, hit my head on a rock and ended up in the emergency room. Hitting your head on a rock is not something to take lightly. I think that is how Datus Proper (author of What the Trout Said and Running Waters) met his end. In my case, I had a concussion but didn't lose consciousness and a CAT scan showed no intracranial bleeding. My headache is now gone and in a follow-up appointment my doctor gave me a few things to watch out for in the coming days. Other than that, I'm good to go.

My intention for the day was to use the size 26 black Killer Buggers, which had worked so well for small wild trout, on some larger stocked trout. The stream is much larger, so instead of fishing the soft short rods I'd fished before, I chose a soft long rod - the Suntech Suikei ZPRO 54.

The main thing that concerned me about the plan was the depth of the water and the speed of the current. I was not at all sure that the size 26 Killer Bugger, tungsten bead head or not, would get down to the strike zone. Perhaps it didn't get deep enough.

Perhaps I wasn't able to fish it slowly enough. The current near the bottom, impeded by rocks and the unevenness of the river bed, is considerably slower than at the surface. The faster surface current is pushing your line, though, and the small fly does not have the mass to resist.

After a while with no hits, I switched to a larger fly with a larger tungsten bead (Daiichi 1110 size 20 with a 5/64" bead). I guess one fish is an improvement over no fish, but one is all I was able to catch. 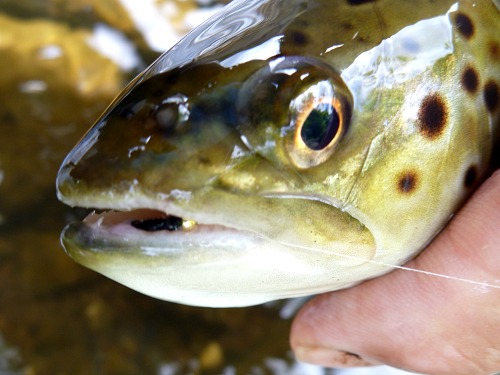 It turns out that trick of holding the fish with your arms outstretched so the fish is closer to the camera works with fish & rod shots, too. It wasn't intentional. The fish wasn't nearly as large as it looks in the following photo. 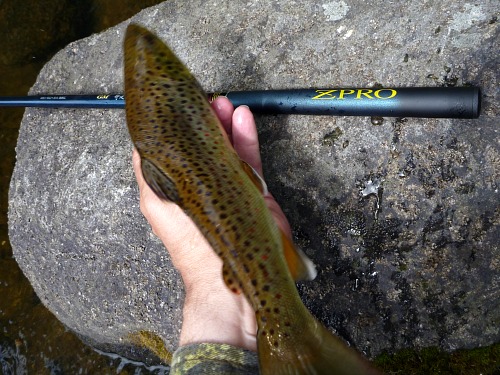 This is the same fish, this time in roughly the same plane as the rod. It's about 11" which is a good size for the ZPRO 54. I would not recommend the rod for 16" fish - but that's probably to be expected for a rod designed for 8X to 10X tippet. Still, I love the light weight of the rod and did decide to order a few for the TenkaraBum Store. 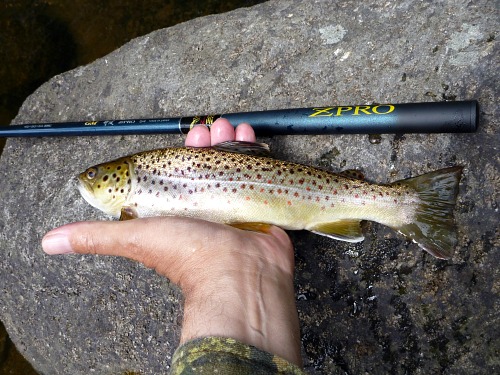 You often hear stories of people who catch a trout while reeling in a fly with the line just hanging in the current below them. Almost from the time I started tenkara fishing, I've been afraid I'd get a strike as I was collapsing the rod with the line streaming below me and just the tip or a couple sections out. It has never happened to me although something very similar did happen one of my customers. He had been fishing two flies, and the point fly had gotten snagged. He was collapsing the rod to pull on the line and break off the fly. When he was down to just the tip section, a good sized trout took the dropper fly. The fish turned downstream, broke off the snagged fly and very shortly thereafter broke his rod tip as well.

On Friday, as I was getting ready to move to another spot, I collapsed the rod, took the line off and was winding it around a Tenkara Line Holder when I felt a tap on the line and then felt a hooked fish. It turned out to be this little yellow perch (which, by the way, I needed for the TenkaraBum Challenge). I didn't even know there were yellow perch in that stream. Like the bluegill I'd caught there a few weeks ago, with a black Killer Bugger I'd caught fish I'd never before caught in that stream even though I've fished it for years. Coach has experienced the same thing in two streams he has fished for years. Do not dismiss the black Killer Bugger. It has turned out to be an excellent fly. 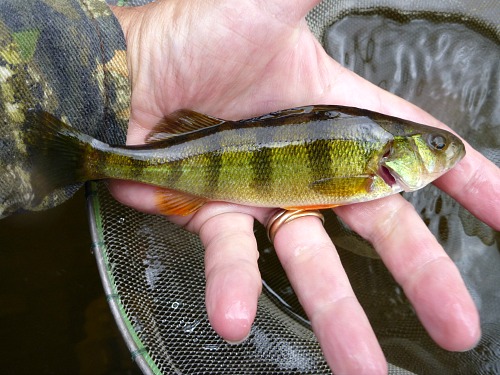 Not too long thereafter, winding the line on a Tenkara Line Holder is how I broke the first rod of the day, my beloved Suntech Suikei ZPRO 54. I had taken my backpack off and set on a rock in front of me. I collapsed the rod and was winding up the line when the line got caught on the backpack. My collapsed rod was tucked in my wader belt, and when I bent over to free the stuck line the rod tip must have slid out a bit. Bending down a bit further then broke it off. Ouch.

I packed up and went to a second stream, also one with mostly stocked trout. It is smaller, though, so I thought the small fly might get deep enough.

They say trout can't count, so there is no reason to limit nymph tails to just three feather barbs. I am sure it's true that trout can't count, but there is a huge difference in the overall impression given by a nymph with only two or three or four tail fibers and a nymph with a very full, bushy tail. You don't have to count to get a very different conceptual image (even if you do have a brain the size of a pea). 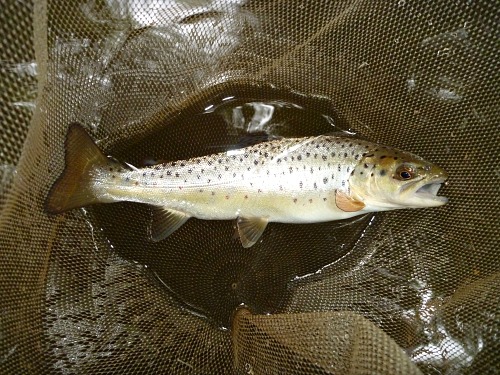 When I arrived at the second stream I found it to be low but discolored. My guess is that discolored water is perhaps not the best condition for fishing a small fly. I was only able to catch one fish, and that one hit as I was picking up the fly for a new cast. I suspect it passed right in front of the fish - otherwise I'm not sure it could have seen it. 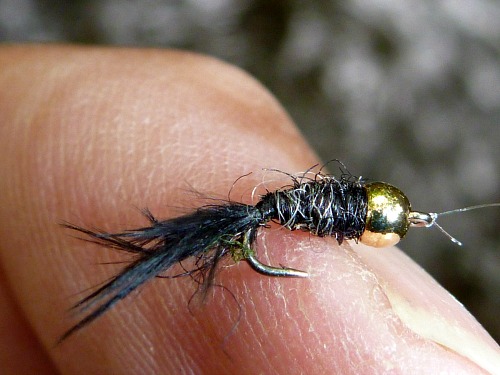 I then went to a third stream. It was getting late in the day and I planned to fish only a short stretch. The current was a bit faster so I chose a fly with a larger bead. The Daiichi 1110 size 20 can accommodate either a 5/64 or 3/32 bead. The fly pictured above is with the 3/32. It creates a much fatter profile. Also the much fuller tail could easily be seen as a longer body rather than a short body and a tail. Overall, it gives a very different impression than the fly with just three feather barb tails. 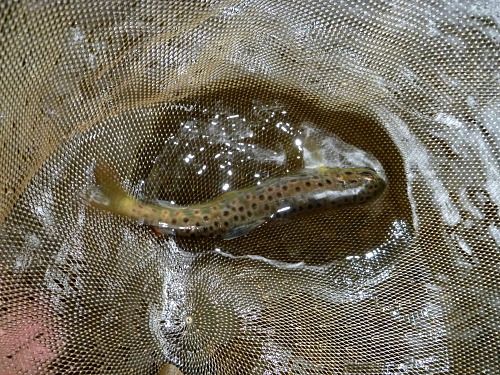 Here, too, I was only able to catch one fish, but my fishing was cut short by my fall. I was in roughly ankle deep water near the bank. I'd just stepped to the right, and immediately after I transferred my weight to my right foot it slid out from under me. There was no sense of "I'm losing my balance." It was instantaneous. One second I was vertical and the next I was horizontal. I let go of my rod but I went down so fast it never left my hand. When my hand hit a rock my Air Stage 390 was between the rock and the hand. I couldn't break my fall, but I did break my rod. I'm just lucky I didn't break my head - or hit quite hard enough to pass out. If you're unconscious, the six inches of water I was in is plenty deep enough to drown in. Datus Proper drowned in shallow water. I got up and drove home.

I already wade with a staff (in my left hand - I fell to my right). I wear felt soled boots. There is only one other thing I could think of. 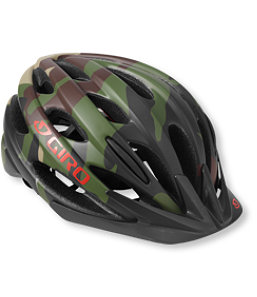 Laugh if you want. I can assure you my wife wasn't laughing.