On Sunday I tried the tapered leader concept with different rods and with tenkara lines of different sizes. In most cases, the results matched what I found the on my 8-23-20 trip: Excellent turnover and accuracy. 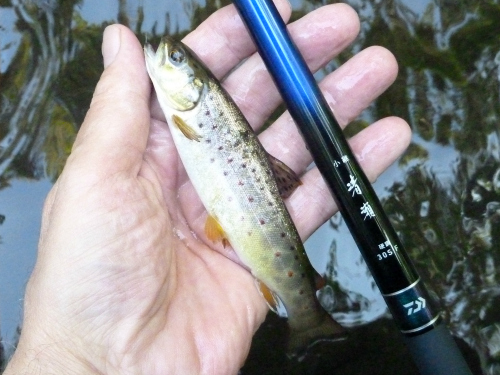 I started out with what I thought would be an extreme example - a size 4 line on a 10 foot rod. Extreme because I would have to taper from size 4 line down to 5X tippet, without the total line length being too long to handle with a 10 foot rod.

For this test, the total line length, rod tip to fly, was 14 feet, consisting of 6 feet of size 4 line, one foot each of sizes 3.5, 3, and 2.5 hi-vis line, and clear tippet material consisting of one foot each of 2X, 3X, and 4X, and then two feet of 5X. In this case, the hi-vis line was tapered from size 4 to size 2.5 in addition to having a tapered leader between the line and the tippet.

With a Daiwa Kiyose 30SF, I would normally fish a size 4 line equal to the rod length (10 feet). I wasn't at all sure that a 10 foot line with only six feet of size 4 line, tapering down to size 2, would cast at all well, but it did just fine.

If I'd used a full 10 feet of size 4 line and then started the taper from there, either the total line, rod tip to fly would have been 17 feet, which was longer than I wanted for the first test with a ten foot rod, or the length of each line segment of the tapered leader would have to be shorter than the one foot length I had used on my 8-23 trip. Eventually, I need to try both of those options.

The fish in the photo above hit a stiff hackled, yarn bodied fly that I should have photographed but didn't. Think of a futsu kebari that is essentially a killer bug without the copper wire underbody, but with three wraps of dry fly hackle, tied on a standard size 12 wet fly hook rather than a 1XL nymph hook. 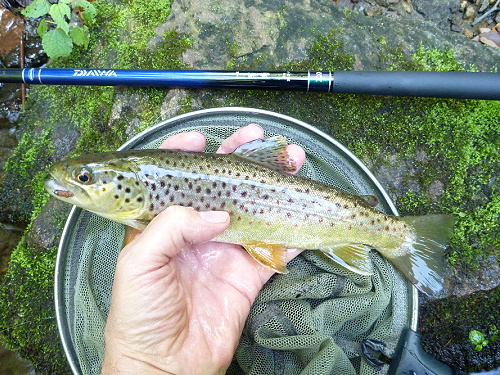 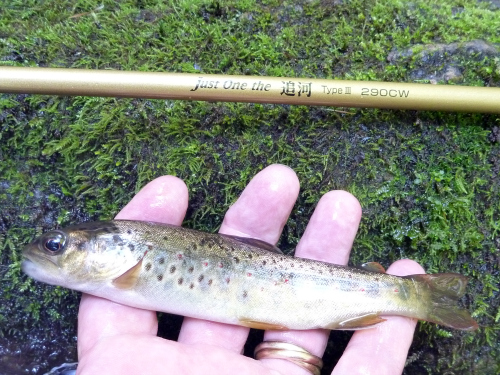 I then switched to a Shimotsuke Oikawa III 290, a discontinued seiryu rod that is somewhat similar to a Nissin Air Stage Hakubai. I wanted to try a tapered leader with a rod that used a size 2.5 line and a 7X tippet.

The same formula I had used for all the other tapered leaders did not work nearly as well in this case. Tapering the leader and tippet from 2X through 3x, 4X, 5X, 6X and finally 7X resulted in too much tippet material that was too light. It was too long and too light to turn over well. I think in the future I'd go from 5X to 7X directly, skipping the 6X altogether. 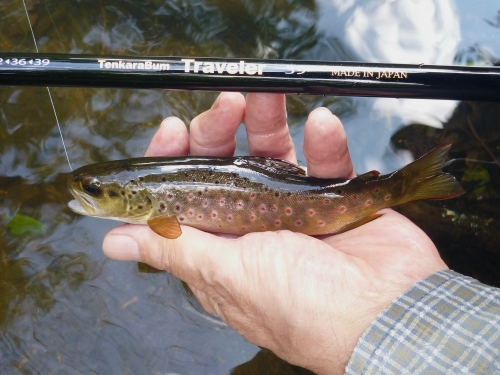 With the TenkaraBum Traveler, which is rated for 6X tippet, having one foot of 6X beyond the 5X worked just fine, although perhaps in part because the size 3 line I started with can transmit more energy than the size 2.5 line I used with the Oikawa III. Still, I think going from 5X to 7X would have worked well for the Oikawa III, and would work for a Suntech Kurenai also.

I fished the Traveler 39 at its shortest setting (10'6") with a line that started with 9'6" of size 3 line, then one foot of size 2.5 hi-vis. The tapered leader was one foot each of 2X, 3X, 4X, 5X and 6X.  It worked pretty well, but I think it would have been better if the size 2.5 hi-vis was 1X clear tippet material instead. The 1X is the same diameter, but one less foot of hi-vis line and one more foot of clear tippet material would have made it easier to keep the hi-vis line off the surface all the time. 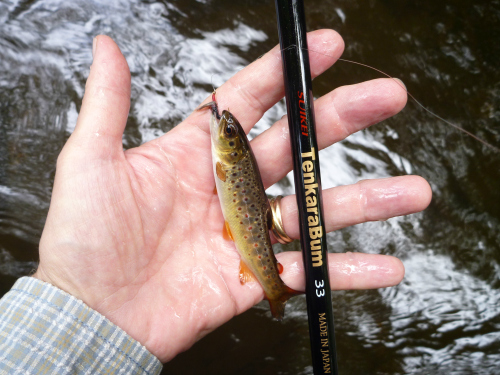 The final rod of the day was the TenkaraBum 33, fished with the same line I'd used with the Daiwa Kiyose 30SF. The TenkaraBum 33 is a foot longer, though, so the total line length, rod tip to fly was just 3 feet longer than the rod rather than 4 feet longer, as it was with the Kiyose. That is even a little shorter than the line length I normally fished before trying a much longer line with Adam Klagsbrun in Colorado last fall.

The line starting with size 4 and tapering down through 5X tippet cast like a dream, although it felt like there was still a bit too much energy remaining in the line after it had fully turned over. It was a little hard to keep the fly from spatting down onto the water with too much force.

The goal is for the line to dissipate all its energy as it completely rolls over, so that the fly lands first, softly, exactly where you want it.

At this point, there are two lines of research I want to pursue. One is to standardize a tapered leader that can be used with nearly any rod. I am leaning towards a six foot leader tapering from 0X tippet (size 3), through 1X, 2X, 3X, 4X and 5X, a foot of each, with a tippet ring on each end.

Attached to the tippet ring on the 5X end, a one foot "tippet" of 5X, 6X or 7X, would give 7 feet of clear tippet material between the hi-vis line and the fly. That would be a good length for medium to larger streams, where you would use a 360 or 400 length rod and a hi-vis line anywhere from rod length to maybe three or four feet longer than the rod.

For smaller streams, though, where you'd fish a shorter line overall, for strike detection you might not want the hi-vis line to end 7 feet from the fly. It might be worth making up two or even three tapered leaders, one completely clear, one with a foot of hi vis size 3 line in place of the 0X, and maybe one with hi-vis size 3 and size 2.5 in place of the 0X and 1X.

If a standard tapered leader started with 0x tippet (equivalent to size 3 line), you could tie it directly to lines of size 3 or 3.5, and to a size 4 line to which a foot of 3.5 was added. Realistically, you could probably skip the 3.5 and tie the size 3 leader directly to your size 4 line. It might not be ideal, but it would still be a lot better than going from size 4 line straight to 5X tippet.

Rods like the Kurenai, which I often fish with a size 2.5 line, will handle a size 3 line just fine. That was the "go to" line size for the rod before the size 2.5 Oni line became available.

I also want to revisit some of the hand-tied, tapered hi-vis lines I made back in 2010 and 2011. It may be that the overall line and tippet would work better if the taper started further up the line. I stopped selling hand tied lines when I could no longer find hi-vis fluorocarbon in sizes 2 and 1.5. Now that I have a source again, I no longer have time to tie lines for sale, but do want to try tapering the line as well as the leader. Now, though, even with size 2 and 1.5 hi-vis line again available, I think those diameters in the leader should be clear tippet material.

I have had a couple emails from people who read the tapered leader page and asked about using their old fly fishing tapered leaders between the tenkara line and the fly. The problem with using those is that the butt diameters for all the knotless tapered leaders is way too thick, as they were designed to be tied to fly line rather than the much thinner tenkara line. It would be much better to start from scratch.