From time to time on fly fishing forums you'll read a comment suggesting that someone could catch more fish if they just did __________, to which the response is often "If I just wanted to catch more fish I'd fish with bait." Personally, I think that makes fishing with bait sound a lot easier than it actually is.

In my July 14 Trip Report I said that I believe fishing with flies is easier than fishing with bait. They are different, of course. Bait fishing has one big advantage - the fish don't spit it out (at least not as often or as fast). Fly fishing has one big advantage - thread and feathers stay on the hook a lot better than bait does, which also allows you to make forceful, pinpoint casts. In terms of actual numbers of  fish, the day I compared the two back to back I would say it was about a tie. Casting and fishing the fly was definitely easier, though.

I did notice two things when fishing with waxworms that I have never noticed when fishing with flies. The first fish I caught was followed by another that kept trying to take the bait away from it. (It was barely hooked in the corner of the jaw and the waxworm was outside of it's mouth.) Even more surprising was that one time when I cast into a low, clear pool, I saw 5 or 6 trout race to get the bait as soon as it plopped into the water. I've had trout hit a fly just as it hit the water, but I've never before noticed several fish going for it at once. What is even more surprising is that they came from all over the pool to get it, with several moving at least 5 or 6 feet from where they had been. I don't know if that makes waxworms a super bait, but it certainly got my attention.

I prefer fishing with flies but ever since that day I've thought about tying a waxworm fly. 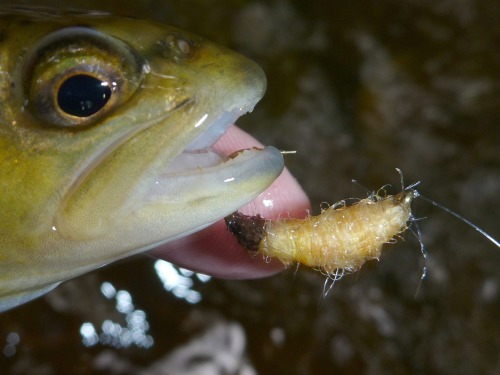 The fly shown above is Sulfur/PMD yarn for the body and Moorit yarn (since discontinued, so I would suggest March Brown yarn) for the waxworm's brown head tied backwards, so the head is actually at the bend of the hook. It is tied on a size 6 Daiichi 1120 (waxworms aren't tiny). The color isn't quite right. It should be more of a yellowish tan rather than a light yellow. I only caught a few fish with it today (it was definitely not a many day) but one of them did hit it as soon as it hit the water.

I spent most of the day fishing with a rod that was brought to mind the fist time I picked up and wiggled an Oni rod. The two rods are not the same, though. The Oni rod weighs twice as much. Unfortunately, I was not able to cast them side by side, as I ordered this one after having already sold the Oni rod. When casting, though, this rod feels very much the way I remember the Oni rod to feel. Both will cast a size 1.5 line without much difficulty. A size 2 line feels like the rod was made for it and a size 3 line casts effortlessly with just a flick of the wrist.

Unfortunately, I was not able to catch the same size fish on both rods to compare their fish fighting capabilities. So, I am (somewhat reluctantly) sending it off to a guy who can compare it with an Oni rod back to back - and is lucky enough to live where fish that can put both rods to the test are not as rare as they are in the New York City suburbs. If his assessment is that the rod compares favorably with the Oni rod I will see if I can get them in quantity. If he suggests that my memory is faulty and they are really not that close - which is a  possibility - at least I'll have a rod that I really like. In that case, I may get them in anyway, but I may just describe them as a great rod without making any overt comparisons.

Until I get his assessment (probably at least a few weeks), I think I'll keep the make and model of the rod under my hat. I have a couple new rods to write pages for anyway so there's no point hurrying (and no point speculating). 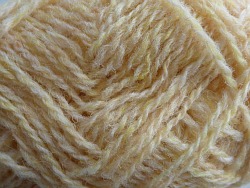