I don't know why I let Coach drag me to such ugly places. I guess because it feels a lot more secluded than it really is and the fishing can be pretty good. Besides, I really like small streams. 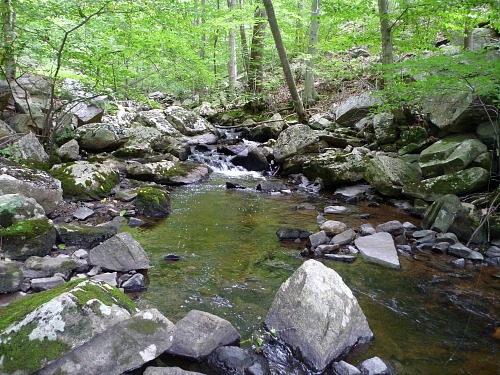 This stream doesn't have much in the way of riffles, it's all pocket water and pools. The pools are small (the photo above shows one of the largest) and the pockets are about the size of a kitchen sink. No two handed casting here, but for me it is still a game of long rod and light line.

With all the overhanging branches, Coach chose an Oikawa III 290. I was pushing it with a Nissin Tsuzumi 330. Offsetting the longer rod, I fished a short line - including tippet it was no longer than the rod. You can get great drifts that way, have great accuracy for hitting small pockets, and you can get away with an extremely light line. A very light line will quickly lose all it's energy to wind resistance, but if it is short enough it loses it's momentum just as it finishes turning over.

I started out with a size 3 line, which actually felt a bit heavy for the rod, then dropped down to a size 2 and then to a size 1.2 (not a misprint - about equivalent to 3.5X, and that's the line not the tippet). The size 1.2 is so light it easily registered the take of a blacknose dace - my first on a fly.

You occasionally read about the number of strikes that wet fly and nymph fishermen never notice - generally when a guy watching or filming underwater surfaces and asks the angler why he never set the hook on all those strikes - to which the angler asks "What strikes? I didn't feel a thing." I would not be terribly surprised if when we fish small flies we get a lot of hits from young of the year trout, or shiners or dace or various assorted minnows and they just never register. Either the line is too heavy to move or the indicator is too buoyant to dip. The fish recognizes the fly is a fake and spits it out with the angler seeing and feeling nothing.

Truth be told, most anglers probably don't care that they miss all the strikes from three inch fish. What's more, I'm sure many would prefer not to know that a fish smaller than some of their streamers had just nailed their fly. I don't think "dinks" is a term of respect and admiration, and if they don't strike on a dink they don't have to search the bushes behind them so can unhook the poor thing. Oh well, to each his own. (And yes, I still think most anglers strike too hard!) 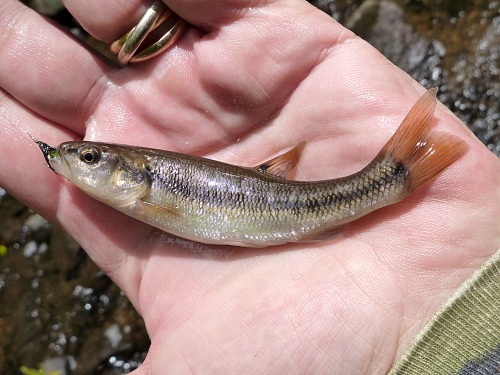 I must be marching to a very different drummer, but I don't mind if the tug on the line is from a creek chub instead of a brookie; or if it's a whitefish instead of a brown. I like catching fish and I also like not knowing what the next fish is going to be. It keeps things interesting. 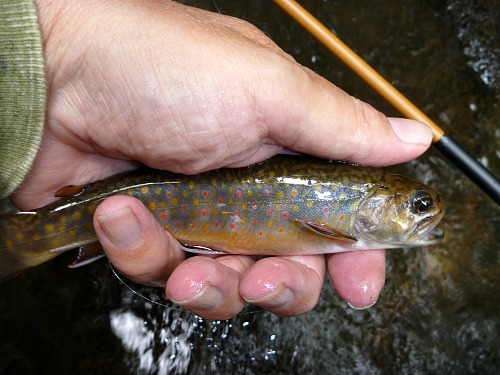 Brook trout are such pretty fish, though, and they live in such pretty places. They do richly deserve their special status (at least, the Eastern brookies do). 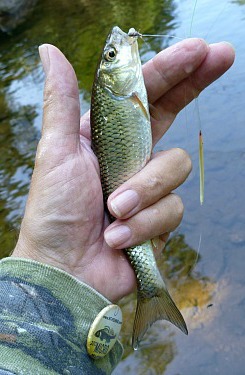 I did want to try my porcupine quill floats on a stream, though, and the little brookie stream was just too little. We moved to another stream that also holds little wild trout, although there they're browns.

The porcupine quill float was a bit frustrating. It was very hard to get the weight right. If there was enough weight to make the float ride vertically, it would be pulled down either from the fly hitting a rock or just from current differentials. I eventually eliminated the weight and just let the quill float on it's side.

It still had the advantage of having no apparent affect on the cast. It was still easy to see against the water. It was still very sensitive. I've never been an indicator fisherman, though, and I will probably use the porcupine quills more for micro fishing than for trout fishing. After the one fallfish I went back to fishing a wet fly my normal way.

I  think that is a common shiner. Initially I had tentatively identified it as a juvenile fallfish. That is another one of the interesting things about micro fishing - not only is it like a box of chocolates in that you never know what you're going to get - you often don't know even after you've got it. Whatever it is, it sure liked the yarn bodied soft hackle! 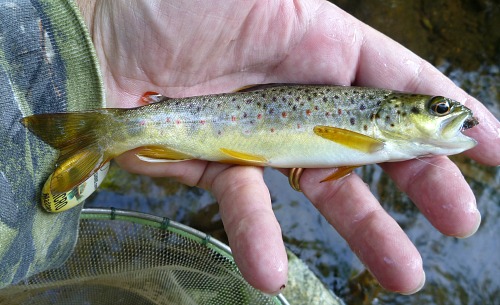 I did manage to catch a couple trout on the same yarn bodied soft hackle. 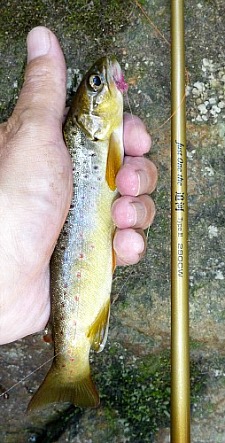 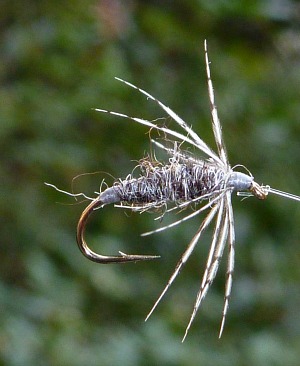