Masami Sakakibara, better known in the US as Tenkara no Oni, is best known for his tenkara casting. He does make it look effortless. He is not quite so well known for his flies, but some of his flies are as outstanding as his casting ability. When I met him in Japan he surprised me by tying a size 4 sakasa kebari - and then he proceeded to tie one in a size 2. Even more surprising, he claimed that he used flies of that size in the stream we had just fished that day. As is apparently the case for most of Japan's more accessible streams, the fish there were generally 7-9" - I didn't see a larger fish on my entire trip. I was a bit skeptical that size 2 flies would be effective for trout of that size.

In the Tying Tenkara Flies DVD (no longer available), I demonstrated tying a fly that I had modeled after Tenkara no Oni's large kebari. I have to 'fess up and say I chickened out. I didn't tie it on a size 2 hook. I just couldn't bring myself to buy hooks larger than a size 6 (1X long shank - which gives the profile of a size 4, but still). 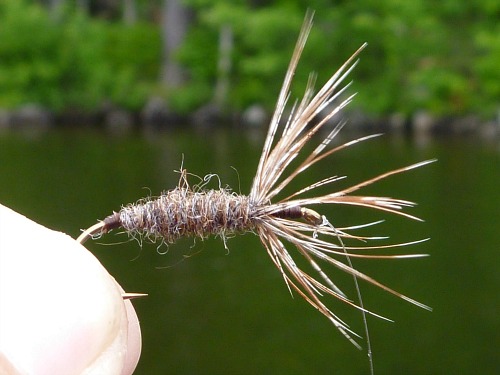 Fast forward a couple years and move over a couple states, and I found myself fishing for smallmouth bass in a lake in Maine. I used a number of flies while I was there, but the best fly, both in terms of numbers of fish caught and also in size of fish caught, was a fly very similar to the "Sakakibara Kebari" fly from the DVD. I did modify it a bit by making the body a bit thicker than shown on the DVD (and quite a bit thicker than Tenkara no Oni's own flies).

Whether tied with the Moorit-Shaela yarn shown above or with the charcoal colored Little Dark Kebari yarn, the flies worked surprisingly well. That gave me confidence to try them for trout a week ago. Not only did the trout take them, they often took them as soon as they hit the water.

That settled it. I had to try a size 2 kebari. The Daiichi 1560 I had used for the Sakakibara Kebari on the DVD and the Big Kebari in Maine doesn't come larger than a size 6 (which was my excuse for getting the size 6s in the first place). The Daiichi regular wet fly hook, the 1550, does come in a 2, though. Let me tell you, a kebari tied on a size 2 hook is a big fly. If I hadn't started the hackle so far back from the eye it would have been even bigger. I was confident, though - well, kind of confident. Actually, hopeful probably describes it better. 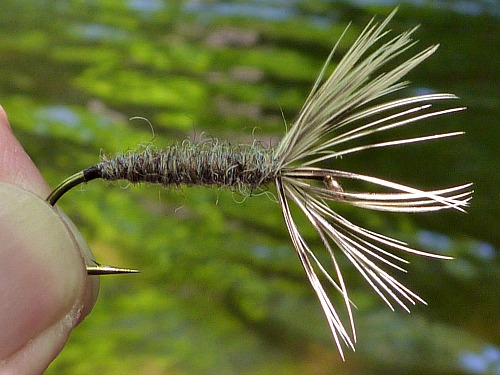 It worked! I didn't catch a lot of fish on the size 2 kebari, and they didn't hit it the moment it hit the water, but I caught a few fish and missed more. Before switching to the size 2 Big Kebari, I had been fishing a size 14 Killer Kebari, and most of the fish I caught were only 5-6" long. I suspect that when the small fish hit the Big Kebari, they hit the hackle or head of the fly and the hook point was under their chin rather than being in their mouth (two of the smallest trout I caught with the Big Kebari last week and this week were hooked under their chin). Not all, though, and it does not take a large trout to take a large fly. 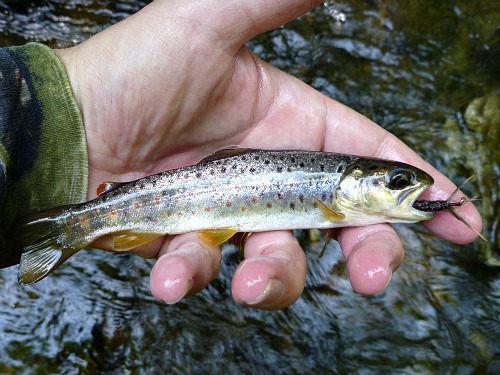 I'll continue to tie and use Big Kebari tied on both the size 6 Daiichi 1560 and size 2 Daiichi 1550, but probably not on waters where I expect to catch 6" fish. For bass, I think the size 2 Big Kebari will be my go-to fly.

After the successful test of the size 2 Big Kebari I decided to swing the pendulum and go catch some little fish. It had been a long time since I'd done any micro fishing. I'd gotten in a new minnow bait to test, mostly to see if it would stay on the hook better than the one I have been carrying.

It turned out that it doesn't, so resorted to the old standby - worms. To be more precise, the smallest little speck of worm that you can cut - which is still probably too big for the tanago hooks. The tanago hooks are the right size for the fish, though, so you make do with the bait. 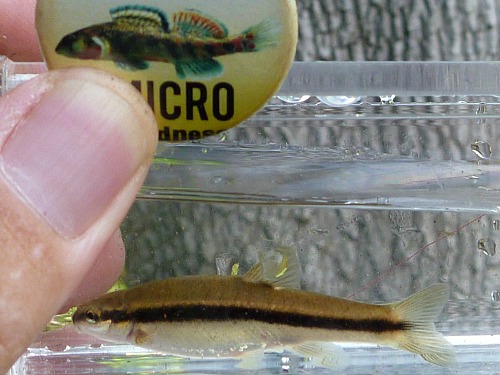 There is something very satisfying about micro fishing. I haven't yet found the right words to describe it, but for me at least it has a completely different feel or sense to it than fishing for trout or bass or even bluegills. I need to do it more. 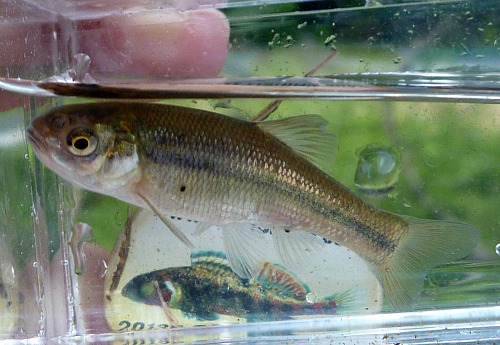 I do find myself wondering, upon crossing ANY body of water now, no matter how small or insignificant, what lives there? I've caught fish in some pretty small water, including the trickle shown below that was too small to even put a culvert in the road. 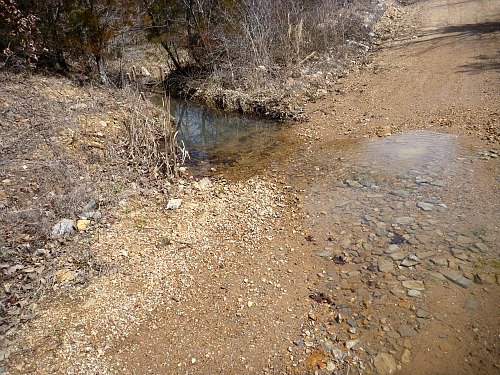