In my Big Kebari - Partridge blog post of June 7 I had mentioned that I wanted to try the Big Kebari the next time I went trout fishing. I got that chance last Sunday. The trip yielded a surprise and a bit of a tying dilemma, but was a quite successful trip.

I only had one of the Big Kebari left from my trip, tied with Oxford yarn and hen pheasant hackle. The day turned out to be another way to look at being a "one fly" angler. You've got one fly - don't lose it. 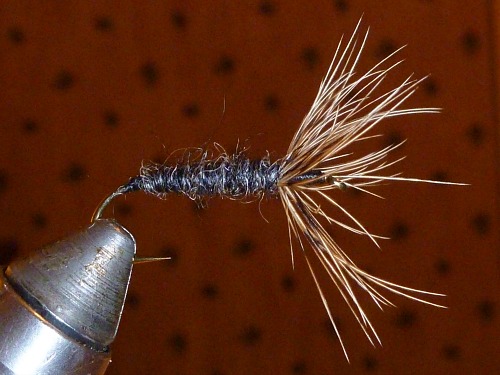 The day was not a "many" day, in large part because I spent the morning and part of the afternoon trying other things. Once I set them aside and tied on the Big Kebari I started catching fish.

The day yielded a surprise. Previously, I'd had a few occasions when fish hit the fly as soon as it hit the water. They were few enough over the years that they still stand out. On Sunday, though, it was a fairly common occurrence.  Nothing teaches you to end the cast with the rod tip high and in the "ready" position better than fish repeatedly hitting the fly the moment it hits the water. If you end the cast with the rod low or have a habit of dropping the rod immediately after the cast (like you did while fly fishing) you will repeatedly miss those fish. 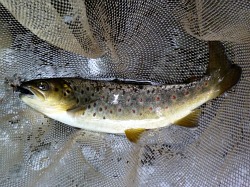 Come to think about it, there were two surprises. The second one was that I caught fish in places where I'd never caught fish before. When fishing alone, I typically do not fish a "good spot" and then get out of the stream and walk to the next "good spot." I fish all the water, although I must admit some of it is fished a bit desultorily (haphazardly, quickly, carelessly, pick your favorite "I'd rather be elsewhere" adjective).

Well, guess what, if you don't fish a spot as if you expect it to yield a fish, your cast may be a bit sloppy, you may not be as careful eliminating drag, you might wade a bit too quickly and noisily - all of which can make the fishing less than stellar. What surprised me today was many of the spots that always looked like they probably ought to hold fish but never seemed to - did. I started fishing the "unproductive" water more carefully and it became a lot more productive.  Even more surprising, some spots that really didn't look fishy, the ones to which I always cast to because they are between where I am and where I want to be so as long as I'm going that way I'll make a few casts, yielded some fish. 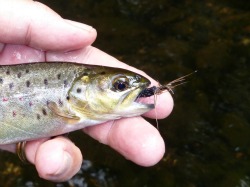 The fish weren't big, but that just underscored my belief that the Big Kebari is not too large for even very modest trout. I tied them on a size six Daiichi 1560 nymph hook, which I had gotten because I couldn't bring myself to order the size two hooks that Tenkara no Oni occasionally uses. Of course, when I got back from my Maine trip, my first order to one of my suppliers included some size two hooks.

I am going to have to modify the fly and the way it is tied from the step by step sequence shown in my June 6 Big Kebari blog post. The fly needs a wire rib. It did not take many fish to cause the yarn to start sliding down the hook bend. The tag / whip finish where I had tied off the fly held, but the three layers of yarn started to slide. Once I get caught up I will do a revised step by step and very likely, a new "one fly" kit. This fly is a keeper.

One last note: for all the people who have obsessed with how to tie flies with soft hackle feathers that are too big for the hook, the answer is surprisingly simple. Buy bigger hooks.