It seems I never take enough pictures - or at least, not the right pictures. On Saturday I attended a barbecue put on by the Croton Watershed chapter of Trout Unlimited. I had been told I could set up a table to hawk my wares, but during the barbecue it didn't quite seem like the appropriate thing to do. I did set out a couple rods, but the only interest they generated was when a couple of kids from the group there for casting lessons picked them up. Although I had not anticipated being part of the casting class, it turned out that I was.

The kids caught on pretty quickly, between me saying "a little more force on the back cast" and "maybe not quite that much." They seemed to be genuinely interested in being able to fish without a heavy fly line generating drag. Not having to teach mending or line control did make the process much easier. Unfortunately, neither caught a fish, but one of them did get a hit. Like a fool, I took no photos.

The barbecue was held in one of the Westchester County parks. (Westchester is the county directly north of New York City, and although it is clearly suburban, it has a number of very nice county parks). It had been a long time since I fished it, and I had forgotten how nice it is.

From time to time I see references to the importance of staying out of the water to the extent possible when fishing smaller streams. When you wade, you do scare fish, and when they dart upstream it alerts other fish of danger. One of the key points made in the Curtis Creek Manifesto, which is really a pretty good introduction to fly fishing in streams, is that FRIGHTENED FISH CANNOT BE CAUGHT.

In the East, it is hard to fish a small stream without wading because the banks are heavily wooded and brushy. Some town and county parks, though, have cleared out a lot of the brush and made hiking trails alongside the streams. This makes for excellent stream access, and also allows fishing without wading. 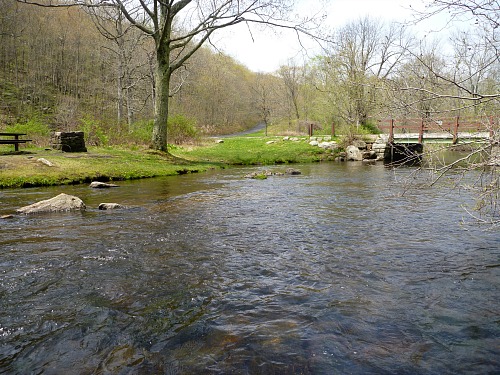 There was a photo posted online a while ago, I think by the Texas Tenkara facebook group, that showed a guy with a walker, wading in a stream. If his wife ever sees that photo, she'll never let him go fishing again (at least mine wouldn't!).

Easy streamside access is something that has crossed my mind more than a few times recently as I slowly descend into oldfartdom. I was never that steady on my feet even before I started using a wading staff. It is nice to know that staying out of the water (which is good for the fishing as well as the older fisherman) is an option. 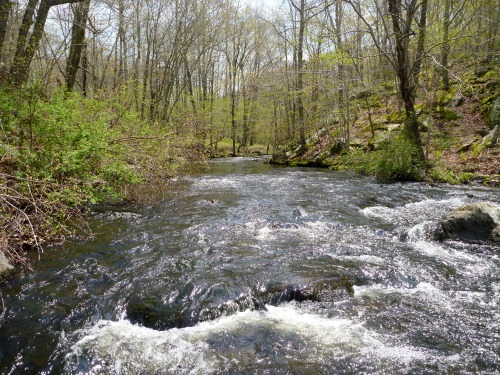 The view upstream from the same vantage point looks like bank fishing would not be possible, but it really is just open enough. The last time I fished here, as I was wading upstream I met a man fishing downstream, staying on the bank, and just as he was almost close enough that one of us would soon have to stop fishing or risk crossing lines, he hooked a fish. With his fly rod, he was drifting "vorms" as he called them, but you could just as easily skate a caddis or probe all the seams and eddies with a small bucktail and probably do quite well. Jason Klass's "downstream twitch" would also work. 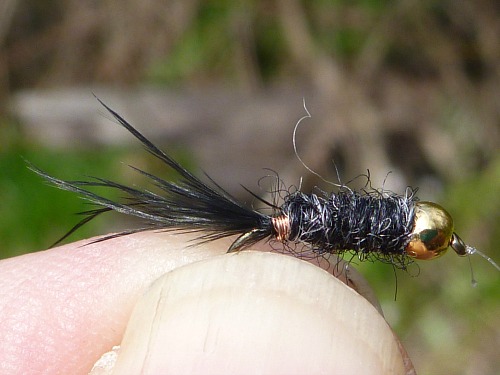 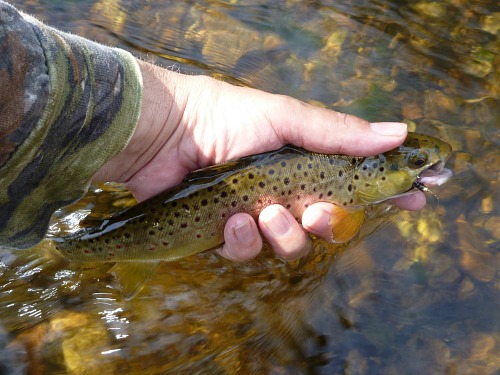 The only fish in the net.

On the way back out, I stopped at the stepover feeder stream I noted on the way in. I'd seen some fish that I suspected were black nosed dace (although many "minnows" have very similar color patterns so it is hard to tell at a distance). I tied on a size 26 Black Killer Bugger, and got three hits but failed to hook any. That made me about one for ten on the day. 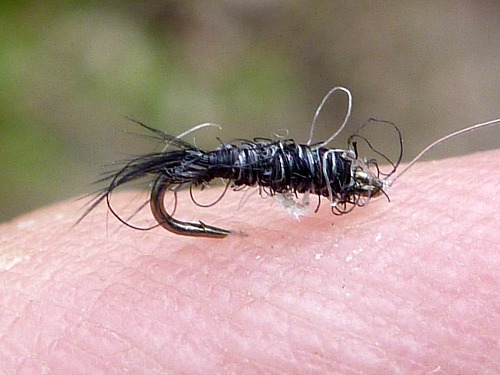 Size 26. A Killer Bugger with a longer tail works better.

I obviously need practice - have to go fishing more.

The only downside of streamside trails is that it also seems to encourage dog walkers to throw sticks in the water for their dogs to chase.

That you are trying to fish does not seem to concern them in the least (perhaps they are PETA members and are actually trying to prevent you from hooking any fish - that or they are just terminally inconsiderate - or both). Not all dog walkers, mind you, only the ones who think their dog should play right where you are fishing.

So, dog walkers, how about a little consideration? Fishermen don't own the stream, but there is an awful lot of stream other than where we're trying to fish.

We can both enjoy the stream without one ruining it for the other.

Dogs in Parks</h3>The only downside of streamside trails is that it also seems to encourage dog walkers to throw sticks in the water for their dogs to chase.<br><br>That you are trying to fish does not seem to concern them in the least (perhaps they are PITA members and are actually trying to prevent you from hooking any fish - that or they are just terminally inconsiderate - or both). Not all dog walkers, mind you, only the ones who think their dog should play right where you are fishing.
<br><BR>
So, dog walkers, how about a little consideration? Fishermen don't own the stream, but there is an awful lot of stream other than where we're trying to fish. <br><br>
If the dog was there first, I can almost guarantee that a fisherman is not going to go into the same pool and start casting. If the fisherman was there first, is same degree of consideration too much to ask?<br><br>We can both enjoy the stream without one ruining it for the other.