The Importance of Being First

If you consider the best fisherman to be the one who catches the most fish, the best fisherman I know stresses above all else that you must be the first person to fish that stretch of stream that day. He plans out his day in advance, but when he gets to the stream, if there is another car parked there, he will leave and go to another stream.

If he starts fishing and sees another fisherman upstream from him, where he would soon be fishing, he leaves and goes to another stream. Of course, he doesn't fish in the NYC suburbs, where the other stream would also have fishermen. Still, of all the wisdom he can convey from his 40-odd years of fishing (including more years than you would believe since he was last skunked), his most important is that you must be the first person on that stretch of stream that day. 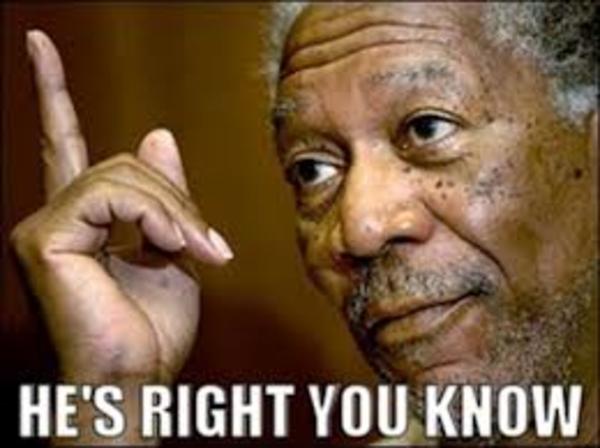 You may have seen that Morgan Freeman meme on Facebook many times... but he's right you know.

On Friday I went to the same stream I had gone to on November 29 (Trip Report 11-29-20). The biggest difference was that this time I went on a Friday rather than a Sunday, and I got there first.

Even on a weekday, and even getting there first, I still never catch many fish in the winter. I am clearly not even in the same league as the best fisherman I know, but I still had what for me is a pretty good day for fishing in the winter. 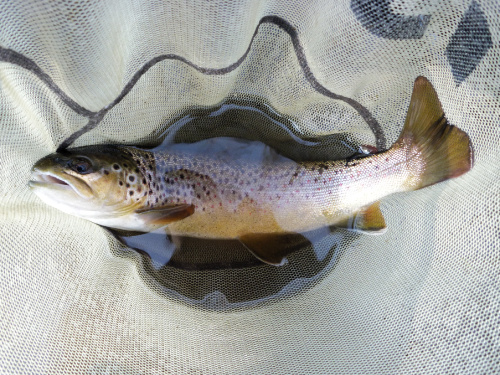 I caught two fish in the first hundred yards of the stream. The first one of which was close enough to shore that there is no way an angler could have fished upstream past that point without spooking it. Once spooked, it would be a long time before it was back in it's preferred lie and ready to eat. Had two or three anglers waded past that spot, I would guess that fish could not be caught all day long. 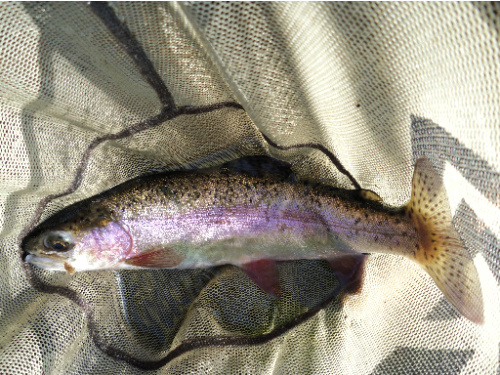 Both fish were caught with a Killer Bug. I think by now I have pretty much proven to myself that a light line (size 2 on this trip) is not so heavy that the line sag pulls the Killer Bug through the water too fast to interest trout. Fishing with a 5 foot tippet (or 2 feet of tippet and three feet of hand-tied leader tapering from the line diameter to the tippet diameter), it was easy to keep the hi-vis line above the surface.

After fishing that particular stretch of the stream, I went to my second favorite spot. There was a guy fishing it. There was no car downstream of it, so he very likely started at the top and fished down to where I saw him. I saw him right where I would have started and fished upstream from there.

I got back in the car and drove to my third favorite spot. As I was walking to it, I saw another angler just in front of me. Ugh! I walked on to my fourth favorite spot. At this point, "favorite" is relative. It is a spot where in the close to ten years I've been fishing the stream I have caught a few fish. Only a few, but a few is better than none and there a plenty of spots on that stream where I've indeed caught none.

I fished upstream towards my third favorite spot, and there was a different guy fishing it. I packed up and went home. By then, there were no "favorite" spots left on that stream and no other stream I could have gotten to before dark. And this was on a weekday in December! Ugh!