I'm falling behind on trip reports, mostly because recent trips have not given me much to write about.

Although I do fish in the winter, I'm getting to the point where standing in a cold river on a cold day isn't that much fun - especially when the fishing is slow. And for me, winter fishing is almost always slow. Often, two or three fish is a good day.

The weather in the northeast has been relatively mild up until this past week. Today the high in New York City was in the mid 30s. I wanted to get out because I have a couple new rods I hadn't caught anything with, and I always like to have a fishy photo with a new rod.

One place I can go and usually catch a couple fish, even in the dead of winter (and not have to stand in the water!) is Central Park. There are a number of lakes and ponds in Central Park, and most of them are open to fishing. I generally go to the Harlem Meer at the extreme northern end of the park. There are generally other people fishing (although not today), and generally no one bothers you (although not today - one woman dragging an overweight fluffball of a dog said I shouldn't torture the fish). Oh well, it's New York, it comes with the territory. 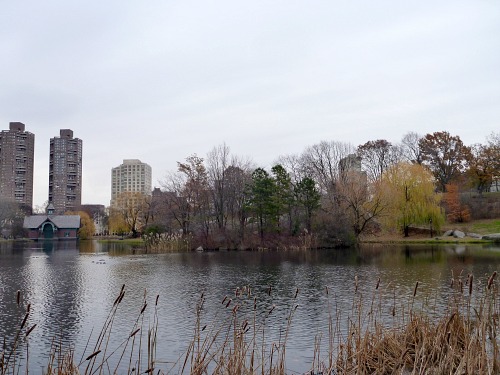 The Harlem Meer is nice in the winter. In the summer it is so weedchoked  that I don't fish it - even though it is only about 30 minutes away compared to three times that to get to the East Branch of the Croton or five times that to fish the Farmington. 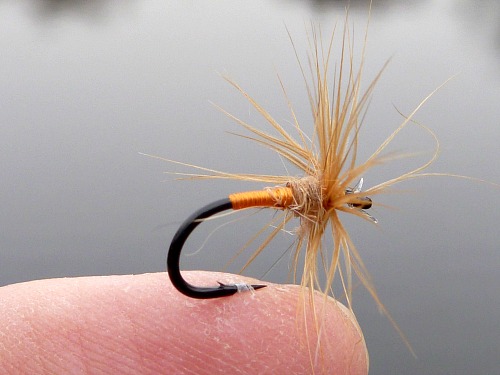 Hen & Hound (with hare's mask substituted for the hound) on Daiichi 2571.

I wanted to try some new hooks that had been recommended by Adam K. (The barb was bent down after taking the photo - I remembered that barbless hooks are required for fishing in Central Park.) The hook is the Daiichi 2571 salmon hook and I'd have to say I agree with his assessment. The hooks are 2X heavy, and flies tied on them do sink better than the same flies tied on regular hooks.

The fly shown above is a modification of my Hen & Hound fly, which uses Pearsall's Hot Orange silk thread, light brown hen hackle and Golden Retriever or Yellow Lab hair for dubbing. You could also use yellow Cocker Spaniel hair - which was one of the ingredients of the original Tupps Indispensable. I couldn't find my Golden Retriever dubbing and had to settle for similar colored hair from a hare's mask. 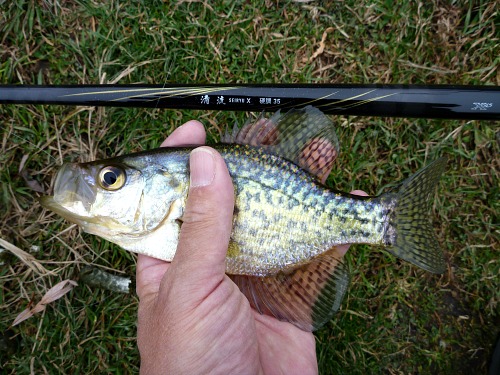 Modest crappie can put a bend in the Seiru X 35.

The crappies were not where I have found them before, but they weren't too far away. They seemed to like the fly and I caught several more shortly after finding the first one. I also tried a fly tied with a dark reddish brown yarn, and I did catch one crappie with it but it was much harder to see. With the Hen & Hound I could usually see the takes, and with that fly I have seen takes in streams as well. The ginger colored hackle and orange body show up pretty well against either the dark rocks or the dark depths.

I also tried a new bait I'd heard of from a friend. It worked pretty well and I caught several more crappies on it. I was also able to catch a couple bluegills on it, after not having caught even one on flies. I won't say what it is just yet, but I did find a distributor and will have it on the site, probably within a couple weeks. 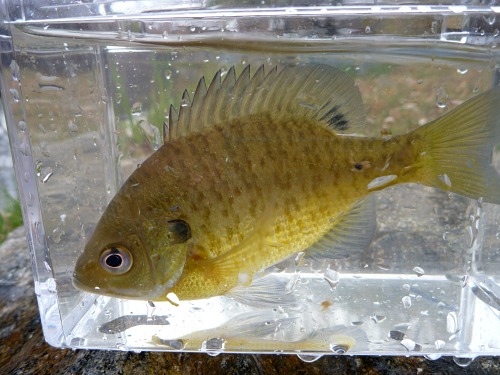 So THERE'S the black spot on a bluegill's dorsal fin!

One of the nice things about the 3x5 photo tank is that it is big enough for small sunfish. The books say one of the key identifying features for bluegills is the black spot at the back of their dorsal fin. I've seen it before but I don't think I've ever gotten a good picture of it before.

After a couple hours I was starting to get cold, but I'd caught enough fish to make it a "many" day, so I had no complaints.