I almost didn't go fishing Sunday. Winter fishing is usually not very productive and I find that with each passing year I am a bit less tolerant of the cold. It had been a while since I had fished with the Nissin Zerosums, though, and I'd just gotten a couple different lengths of the Shimotsuke Kosasa to try out.

I had also been given a few bead head nymphs by a customer who fishes a Zerosum 7:3 360, so I thought I'd give them a try. He explained that on his river, small and flashy worked better than big and dull. I have fished bead head nymphs from time to time, but have almost always gone for a black bead, thinking it more closely imitates a trout's natural food. Let me just say my eyes were opened on Sunday! Copper, gold, nickel - I guess trout like bling. 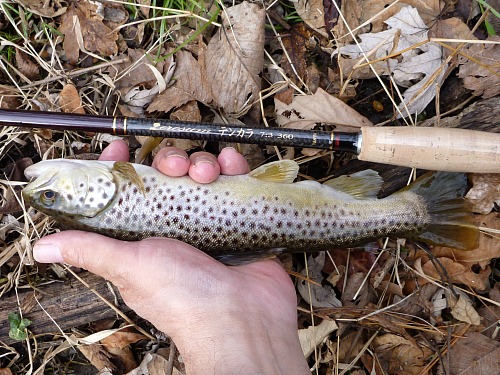 First cast - fish on! That surprised me a bit, as my first cast is usually pretty sloppy, and usually just to try to jog the muscle memory into working again. Because of that, it is never in a high percentage location. (Why take a chance of screwing up a good lie with a sloppy cast?)

The fish wasn't large, but he put a bend in the Zerosum. I generally prefer a 6:4 to a 7:3, so I haven't had much time with the Zerosum 7:3 360, but I can certainly understand why the guy who sent me the bead heads fishes them. The rod handled both the fly and the fish perfectly. 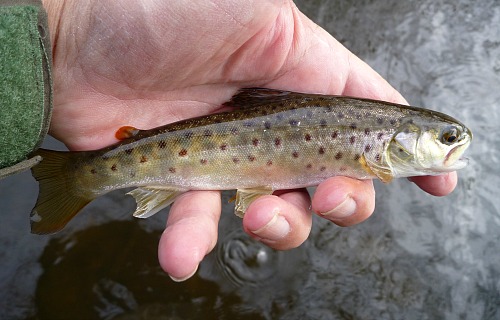 I could never be a one-fly angler. I am just as likely to change a fly that is working well as one that isn't working. After fishing the bead head nymph for a while, when I came to a pool that had yielded fish on a yarn bodied soft hackle the last time I was there I switched the bead head for a yarn body (shaela yarn, partridge hackle, size 14 Daiichi 1550). I was soon rewarded with two stream bred trout. This stream is heavily stocked but does support some natural reproduction. The fish in the photos above and below are too small to be stockies.

The fish below is the size that most of last spring's stocked trout would be by now. It is a nice sized fish for the Zerosum 6:4 360, although I am sure the rod could handle considerably larger fish as long as you weren't fighting the current as well as the fish.

I understand there are a couple new rods about to hit the market, and despite just about every tenkara blogger dropping hints, the full court buzz is still a week or so away. One guy did tell me they look like the Zerosums. All I can say is the Nissin Zerosum rods are wonderful, light, responsive rods. You can imitate the look, but you just can't match the feel. I have fished rods from a lot of manufacturers but I have yet to fish a western designed, Chinese made rod that is a match for premium Japanese-designed rods.

I often share the stream with a Great Blue Heron. On Sunday there was one right where I started fishing. As I worked my way upstream so did he, keeping perhaps 100 yards between us. The wound on the fish below appeared to be so fresh that it could have happened just a little before I caught it. The stream has a 14" minimum length requirement and the fish was only just over 12" so I didn't keep it. Otherwise I would have. 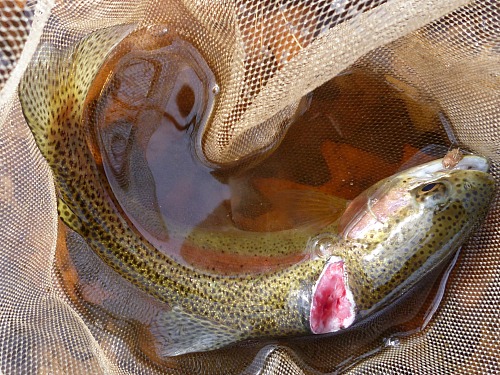 I spent most of the day fishing the Nissin Zerosums, but I did have a couple Shimotsuke Kosasa rods to try out. I've offered the 210 for a few weeks now as kids' rods or micro fishing rods. On the Kosasa page, Dan H said the 240 was well balance and fun, and Tom Davis of Teton Tenkara said the 270 was terrible. It is strange for two rods that are right next to each other in length to be so different, but I completely agree with both views.

The 240 is a fun rod and the 270 really is horrible. First, the 240 isn't a full 240 cm, and is really only 7" longer than the 210. It is a bit heavier and because of that has a different feel. I liked it but I probably won't carry it. Being heavier, it probably isn't as good for younger kids and I really do like the Kiyotaki 24 much better for older children and for adults looking for a short rod to use in brushy streams. For a 240 rod, the Nissin Air Stage is the rod to have, though. As with the Zerosum, Nissin has a winner in the Air Stage.

It almost takes me full circle to the way I fished before I'd met Dr. Ishigaki. What I had found worked on the smaller streams I fish was a Hi-Vis line shorter than the rod, a clear extension thinner than the line but thicker than the tippet and then a 6X tippet.  You want a Hi-Vis line to watch for strikes, but it can be shorter than you probably use now.