Saturday I fished with a couple friends from the New York City Tenkara Anglers club. It turned out that we went to one of the streams that Coach and I had fished the previous weekend. On that trip, Coach and I had fished a pool where he had seen a pod of at least 8 good sized trout. We each caught three, all but one on egg patterns.

On Saturday, we started at a different spot on the stream but gradually made our way up to that pool. On the way up I managed to catch a couple modest wild browns. I know they were wild because they were too small to be holdovers and New Jersey did not stock any brown trout this year. 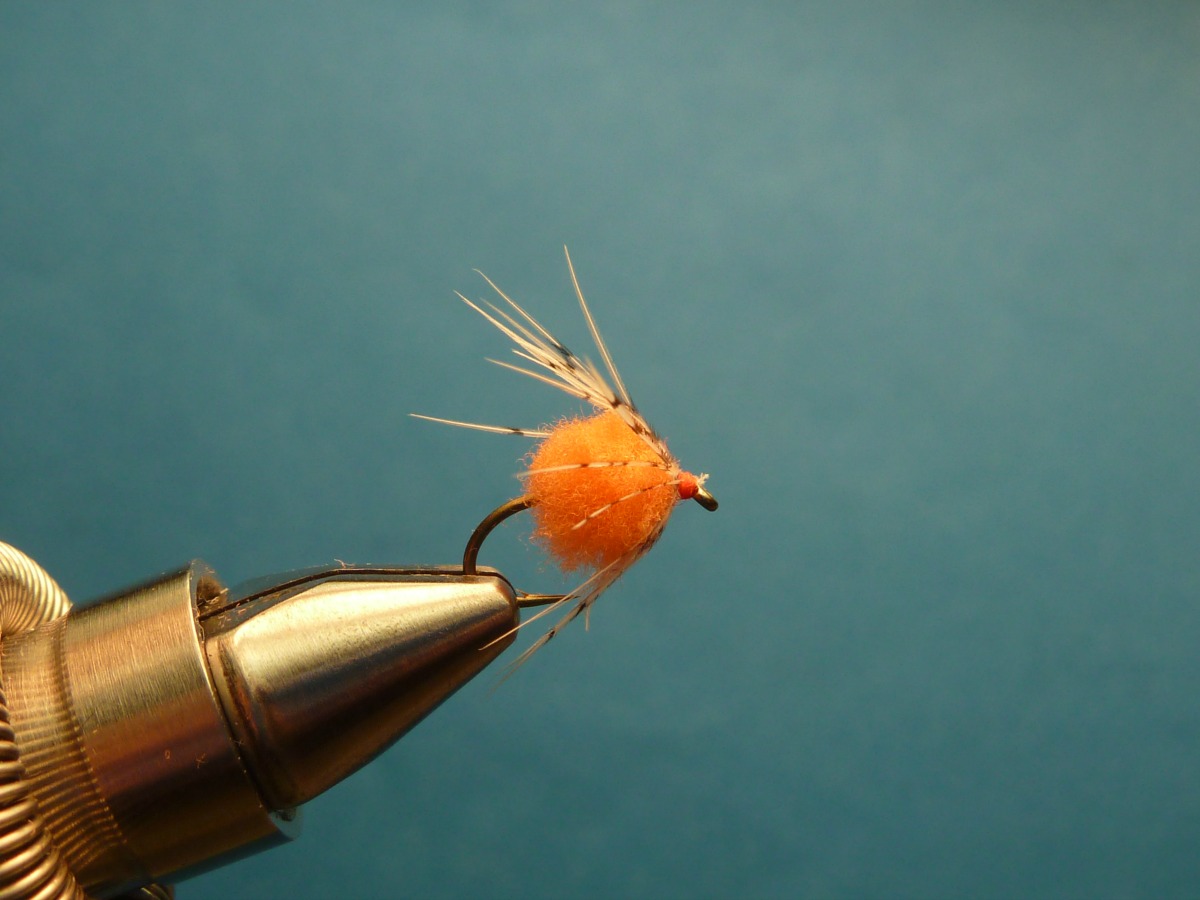 Both were caught on an egg pattern that I had tied to tease Jason Sparks (the dynamo behind the Tenkara Jam), who had mentioned on Facebook that he didn't mind fishing worm patterns but he drew the line at eggs. The fly I tied was a Partridge and Orange, which is a classic that has been fished for hundreds of years, but I made the body a bit wider than normal. OK, quite a bit wider. Round in fact. It only looks like an egg. It has hackle so it must be a fly, right? 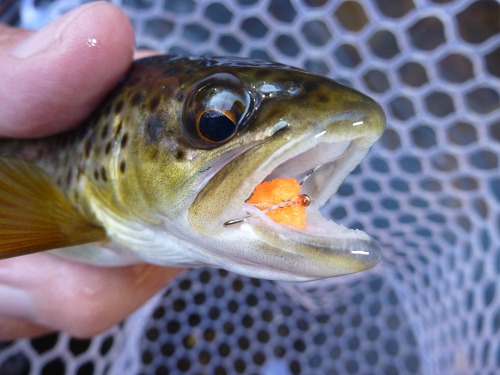 Whatever you want to call it, it did manage to catch a couple fish. This is the smaller of the two. The other was just under 12" but pretty skinny (upper right). 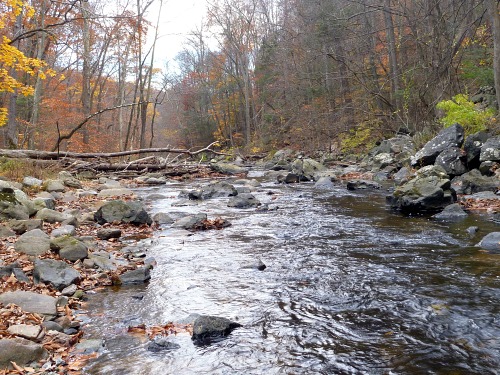 For as much water as I covered, two fish is a pretty meager take. I often call that stream the best looking water I never catch fish in. It looks like the fishing ought to be fabulous. There is lots of pocket water, and even though the water was extremely low compared to normal, there were plenty of places that were deep enough to hold fish. It does get a lot of fishing pressure, though, so it may just be that the fish are hard to catch or I'm not skilled enough to catch them.

We eventually got to the pool where Coach and I had caught fish the previous weekend. The fish were still there and still very easy to see (which meant they could see all the anglers just as easily).

There was a guy already fishing the pool, so Nelson G and I walked on past and fished a bit further upstream at another pool that Nelson had wanted to show me. It didn't have the same characteristics, though, and no fish were visible. A series of blind casts yielded no hits, and I decided to go back. The fisherman was still there.

Although Coach and I had easily shared the pool the previous week, it wasn't quite large enough for me to feel comfortable asking a stranger if I could fish it also. I fished the next pool just below it, which was close enough to keep a good eye on him. When he finally gave up and left, I was in the prime spot in less than a minute.

One of the guys I was on the trip with came by and we shared the pool, just as Coach and I had the previous week. Two people can fish the pool reasonably comfortably (as long as they know each other).

It soon became painfully obvious that not everyone is as reserved as I am about crowding another angler. The other four guys who eventually showed up and fished the same pool didn't even ask. They saw the fish as they walked past and they just came in and started casting. 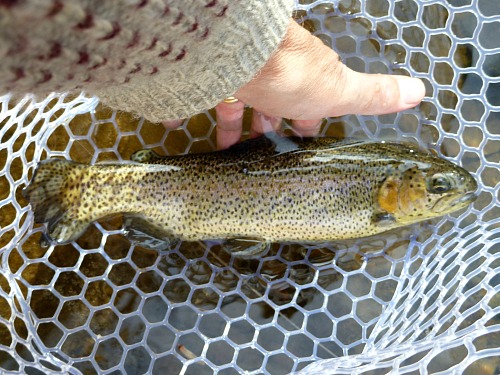 The previous week, six of the seven fish that Coach and I caught (counting the white sucker as well as the rainbows) were caught on egg patterns, and I think four were caught with pink eggs.

On Saturday, I started out fishing a pink egg and the fish just scattered as it drifted between them. They obviously wanted nothing to do with it and some pretty clearly looked like they were frightened by it.

It and a second trout (a bit larger and with all fins intact) were caught on a micro egg. Coach had once told me that the stream was known as a small fly stream, so when the fish wouldn't take a normal sized egg I put on a small one.

Some time ago I had tied a couple micro eggs with just a very small loop of the Sucker Spawn yarn on size 32 hooks, thinking they might work for micros. The egg itself was no more than 1/8" in diameter. I don't know if I've ever used them for micros, but they worked for trout on Saturday.

I don't know why I didn't take a photo of the egg, but it's probably because I didn't expect it to work. After catching two fish in fairly short order and then nothing for a while, I gave one of the micro eggs to Nelson and left the pool to him (and the four claimjumpers). Fairly soon thereafter, I lost the other micro egg in a tree. 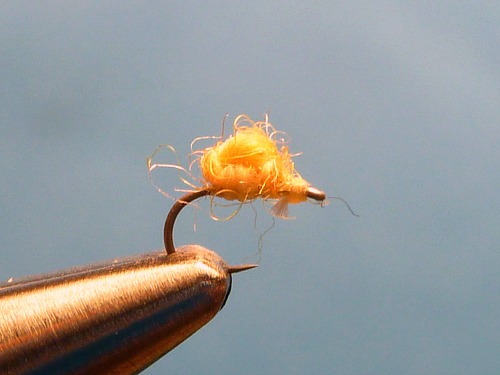 The following day I tied a few more of the micro eggs. They looked something like this, although this micro egg was tied on a size 28 and the ones we used on Saturday were tied on size 32 hooks (which are smaller, but not THAT MUCH smaller).

A friend with whom I compared notes on the weekend's fishing told me of Ben Turpin's micro eggs, which are tied on size 18 hooks. An 18 would be much too large for the micro eggs I used on Sunday, but I decided to compromise and see how small an egg I could tie with McFly Foam. I managed to tie a very small egg on a size 24 Daiichi 1140. It looks OK so I'll try it next time I go out.

There is a common theme with the micro egg, the Pink Chenille Worm, the results I had weeks ago with Ultralight Worm Fishing using size 28 and 30 hooks, and the unique mosquito fly a friend sent me (midge hackle glued to a size 32 hook rather than tied on with thread). All used very small hooks and all worked surprisingly well. It might be that the main reason fish spit out flies is that they feel the hard hook. A much smaller hook may not ring the alarm bells nearly as much.