Please note: The Pink Chenille Worm is not the same as the Overhand Worm, which is also made with pink chenille. The Overhand worm is even simpler, requires no tools other than a pair of scissors or nippers, and can be tied as needed on the stream.

Tied the way it is shown in the step-by-step sequence below, it is one of the easiest flies you can tie and one of the least expensive. I think you'll find it is also one of the most effective.

It would be an ideal "first fly" for a beginning tier. And as many times as I've said I am not a "one fly" angler, this one may make me reconsider. 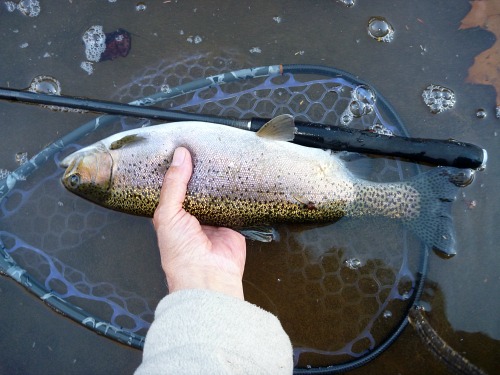 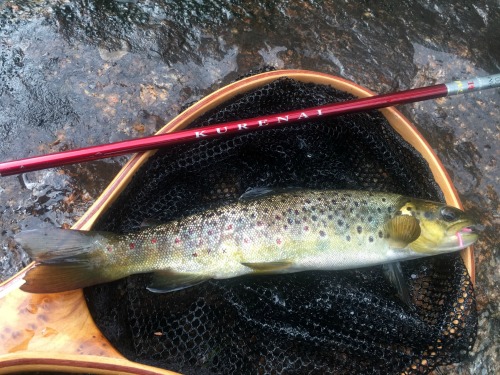 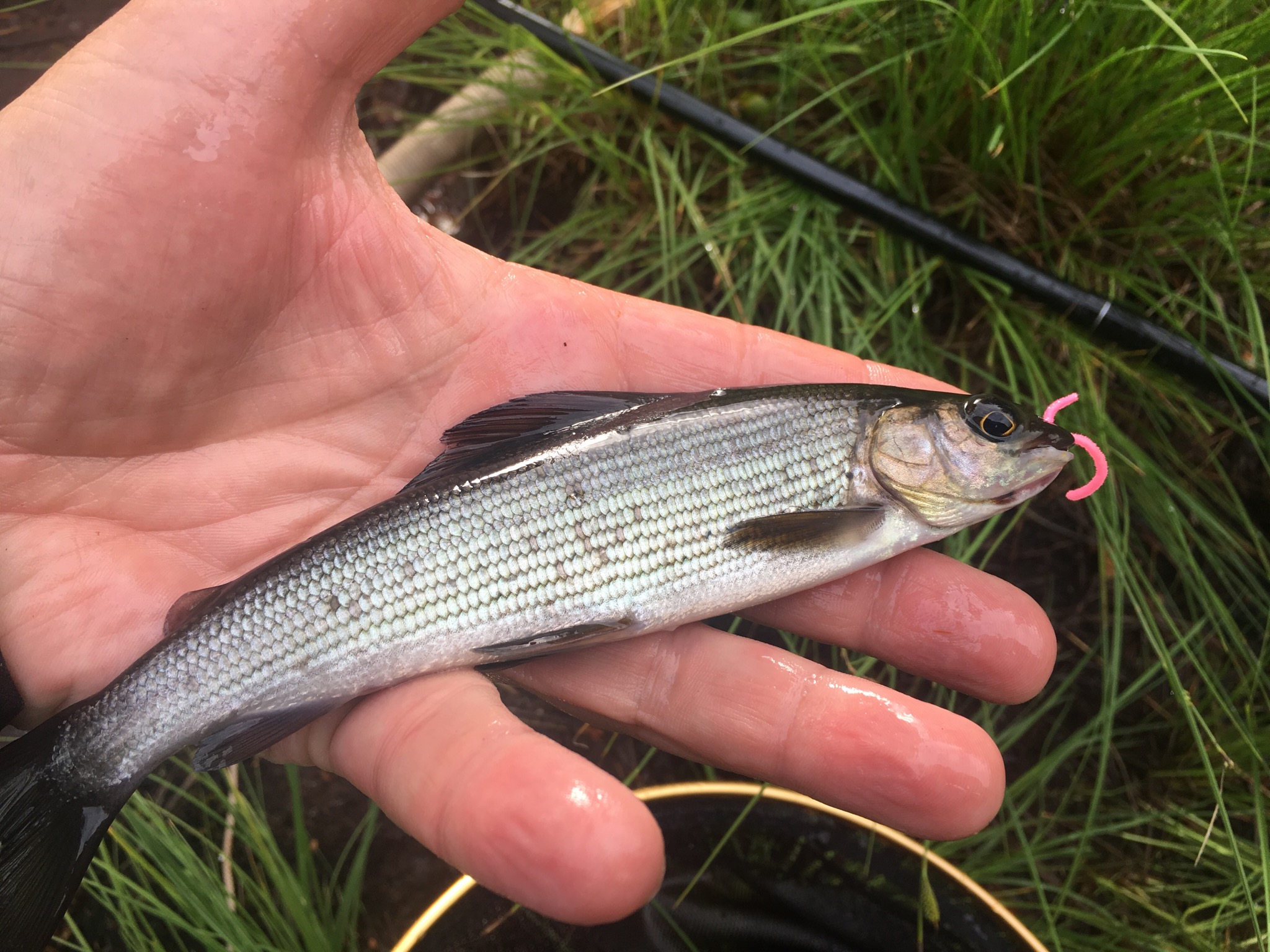 1. Cut a 1.25" length of chenille. HareLine Dubbin now uses larger cards so if you purchased the chenille recently, you cannot just measure length by cutting a piece the width of the card. 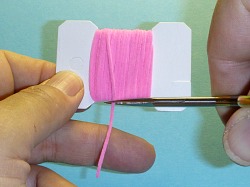 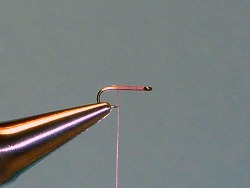 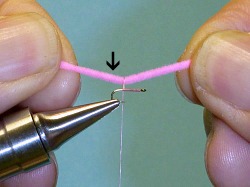 4. Wrap forwards with the thread, holding the chenille for the first few wraps so it does not slide over to the far side of the hook. Wrap about halfway back to the eye. (If you wrap all the way to the eye, it will be very hard to thread your tippet through the eye.) 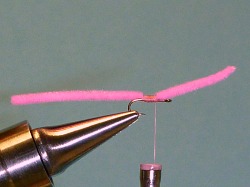 5. At that point, do a whip finish. If you normally finish a fly with a couple half hitches, it will be easier to lift the front part of the worm and do the half hitches around the hook shank. I usually don't use head cement, but if you do, touch it on the underside of the hook to avoid the chenille. 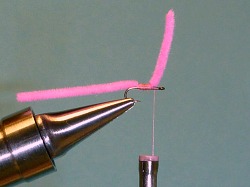 6. Pull on each end of the worm to stretch it. That will straighten it a little. It won't be perfectly straight, but the fish don't care. They also don't care if you singe the ends of the chenille, which some San Juan worm instructions call for. You'll lose the fly before it falls apart. 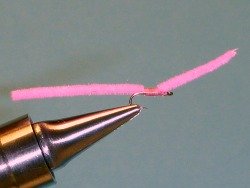 A large part of the beauty of this fly is that it is soft and the hook is not large, making it less likely that a fish will feel the hook and spit out the fly before you get a chance to tighten the line. The smaller, less noticeable hook is the one clear advantage the Pink Chenille Worm has over the Overhand Worm.

Resist the urge to add a bead either behind the eye or in the middle of the hook shank. The fish will know immediately that the hard object is not a soft worm and will very likely spit it out before you can set the hook. Resist also the urge to tie the fly with a larger hook. The #20 is plenty big enough to get good hook sets. A size 12 or 14 will only make it much easier for the fish to know something's wrong. Finally, resist the urge to make the worm itself much longer. You don't want a fish to be able to hit the worm and miss the hook. 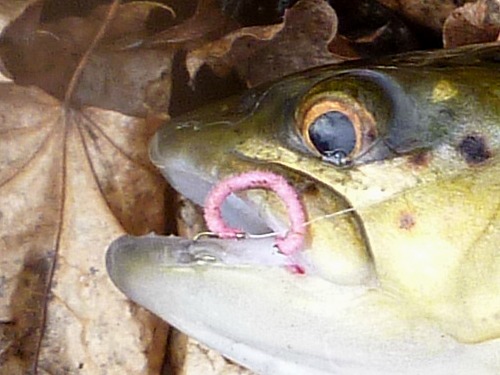 If you do want a longer worm, tie it with two hooks. I had initially recommended one at the 1/3 and one at the 2/3 point, but I now tie the lead hook right at the front of the worm with the rear hook about 2/3 to 3/4 of the way to the rear.

Worms tied with only one hook or with the front hook a ways back from the front of the worm tend to bend in water and look more like a pink "V" than a relatively straight worm. Fish still hit it, but I think it might do better if it isn't bent like that.

The rear hook is tied only to the chenille, which is strong enough to hold a fish. Be sure to check your regulations to make sure a fly with two hooks is legal where you fish.

I fish the Pink Chenille Worm with a small split shot a few inches above the worm. That does create a little bit of slack, but I believe the advantage of the softer fly more than offsets that. With different sizes of shot, you can fish the same fly in very shallow water or fairly deep water.

I have had a very wide range of "takes" with this fly, ranging from the fly just stopping and the rod tip gently bending down to the line shooting a foot to one side as a fish takes the worm and then heads back for cover. For nearly all those fish, "striking" to set the hook was not necessary. A size 20 fly goes in so easily enough and holds well enough that all you really have to do is tighten the line. You do have to be quick but you do not have to be forceful.

Give it a try. It's one of the few things in life that is really easy, really cheap and really good. 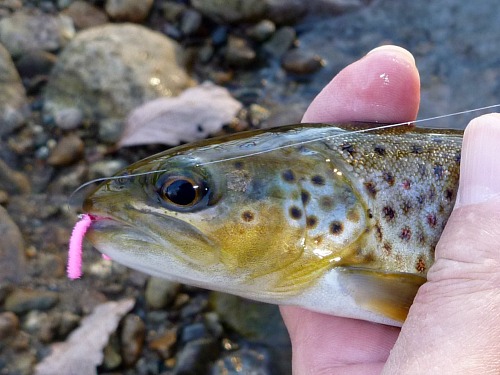 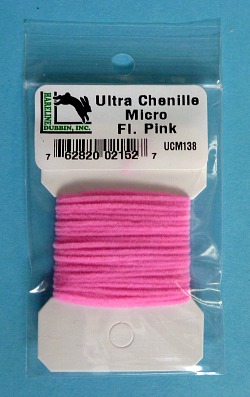 ...my Pocket Mini, which I threw into my pocket to walk the dog in our local park.  We stopped at a creek and I caught a couple of gorgeous Redbands on the pink worm you told me about.

You have certainly enriched my fishing experiences.

I went to a tiny pond last evening  where I'd connected with crappie a few weeks ago.

No crappie but I had a few bluegill bums so I added one of the double hook chenille worms as a dropper. Imagine my surprise when I connected with a "huge" fish. First I thought it was a really large pickerel in the 20"+ range as it stayed near the top of the water column. When it did a circle only a few feet out I saw "bulk" and a big head and figured I'd hooked a big catfish! Then it jumped and I realized it was a bass.

Holy s*** was my thought as I lifted the fat 19.75" fish (measured) out of the water. I was shocked that it had taken the worm and that the little hooks held.