If you think it's a little late to write a trip report from last June, it's because the video that was shot of the trip has just been released.

We finally got together at the end of June and went up to a couple streams just north of New York City for the shoot. I usually manage to catch a few fish, but I was more than a little nervous that when the heat was on I'd get skunked or miss all the strikes. As it turned out, I needn't have worried. It wasn't a many day (until we stopped for some micro fishing on the way back home) but I did catch a few fish and they managed to capture every catch. These guys are pros.

I didn't take any photos that day other than a few of Rich trying some micro fishing for the first time on our way back into the city.

This report isn't about the micro fishing, though. Here is the video they shot. It's only about 3 1/2 minutes long, but captures the essence of the day. It was a good day, and I hope you think it's a good video.

Video not available at this time. Hopefully I can bring it back.

Sometimes even a TenkaraBum 36 won't prevent that one fish from getting away... 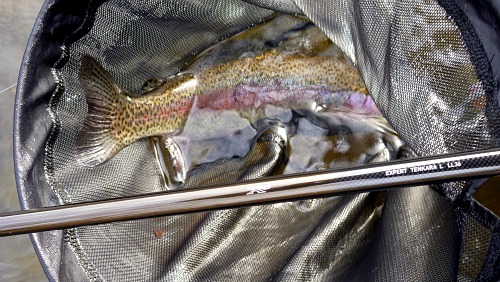