The Shimano Keiryu (Mountain Stream) Tenkara 34-38 ZL is a 3.4-3.8 meter zoom tenkara rod. Over two years in development, the rod breaks some new ground. The most obvious is the use of EVA foam for most of the grip. The front inch and a half or so of the grip is cork, but the rest is very nicely shaped foam. One of the first American tenkara anglers to fish it pronounced it "freaking awesome."

The foam grip is really very nice. It is not "squishy" at all and is probably the type of grip we will see on the majority of tenkara rods in the future. Face it, even bad cork is expensive. Much better to put those yen into the blank rather than the grip.

After "carpet casting" one at the Somerset Fly Show just after it was introduced, I pronounced this a "Wow" rod (in fact I did - out loud - after the first few casts). It is very light and has tremendous damping.

When I first wrote this page, I described the rod as "crisp," thinking of the damping. One of the first buyers questioned that description, saying he felt the rod was way too soft to be called crisp.

The rod does not feel overly soft when you cast it with a light line (at least to me it doesn't). I have heard that it was designed for a 3.5 line but I have to say I prefer to use a size 3 with the rod at full extension. At the shorter of the two lengths, a 3.5 line is an excellent choice. (You could certainly use the 3.5 line at both lengths, though).

Perhaps the most surprising aspect about the rod is that it is firmer at the shorter length than it is at the longer length.

That is unlike any other zoom rod I know of, and is unlike nearly all other rods that come in two or more different lengths. Normally, the longer length is firmer (has a higher penny rating) because the only difference between most 330 rods and their 360 counterparts is the addition of one more section. Since the added section is one of the thicker, stiffer ones near the grip, the longer rod feels stiffer.

The more you think about it, though, the more the Shimano Keiru Tenkara 34-38 design makes sense. Many anglers, particularly in Japan, prefer a slightly firmer rod for fishing smaller, tighter streams. It's not about fish size - it's about casting precision. They are trying to hit smaller targets and find that a slightly firmer rod, generating slightly higher line speed, gives more accuracy. On larger streams, pinpoint accuracy is not as critical, and the silky smooth casting stroke of a softer rod is more highly valued. Every rod is a compromise, and you might give different features different weights depending on where the rod will be used.

Just as the rod design was dialed in for Japanese tenkara anglers' rod preferences relative to stream size, it was also dialed in for fly choice. The rod just excels with an unweighted kebari (and does quite nicely with a CDC & Elk). I have a customer who mostly fishes soft hackles and flymphs, and he loves it. This is not a rod that you would want to use with heavy nymphs, though. You could fish a size 18 or 20 bead head nymph, but it is not a rod for size 10 tungsten and lead stonefly nymphs by any means. 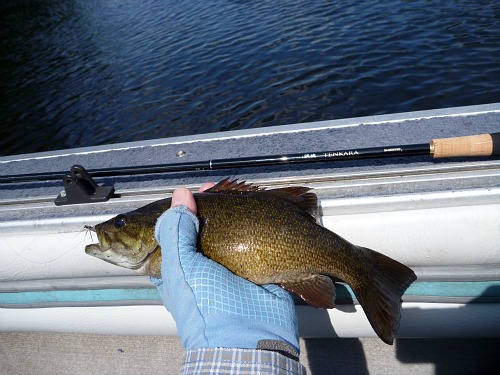 I would have to say the rod is also dialed in with Japanese fish size. The largest fish I've caught with the rod was a smallmouth bass that was probably a bit shy of 12". In Japan a 12" fish is a trophy, though. You'll land the fish, but you'll remember the fight for a long time.

The specs on the rod break down like this:

Rod made in Indonesia. 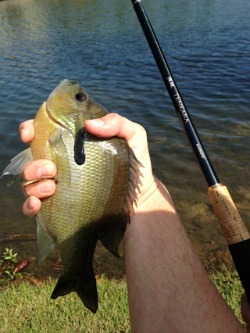